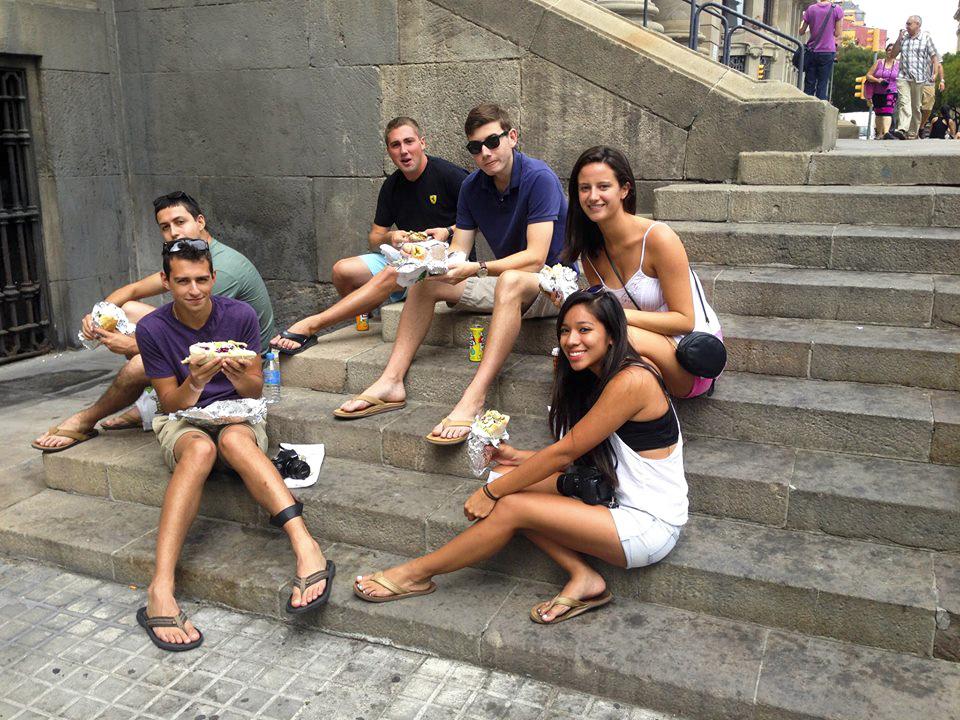 Courtesy of Liz Cingari
Ithaca College junior Caleb Grant, bottom left, eats with a group of friends on the steps at Placa d'Antonio Lopez near the Barceloneta beach in Barcelona, Spain, during his study abroad session for the fall of 2014.
By Kellie Hodson — Contributing Writer
Published: October 22, 2014

As fireworks burst overhead and drums pounded in his ears, junior Caleb Grant watched the street performers dressed as devils run down a narrow street in Barcelona, Spain. The performers carried the fireworks on spears, and people formed circles on the streets, dancing and putting their arms around each other while the sparks showered from above in a festival known as La Merce.

“This was absolutely one of the most amazing experiences of my life,” Grant said. “It was a unique festival, one that could never go on in the United States. … Eventually I lost my friends in the mass, and it was just me, the crowd and fire. It was something unlike I’ve ever experienced before and am so grateful I got to be a part of it,” he said.

Grant, along with juniors Brittany Asito and Katie MacDonald, is a part of a group of Ithaca College students taking a semester abroad in the colorful city of Barcelona.

Asito’s course load at the International Education of Students Abroad Center includes two classes tailored to her business administration major — Management Across Borders and International Marketing: A European Approach — in addition to a Spanish language class, which is required of all students in the IES program. Instead of taking an internship, Asito said she decided to delve into her Management Across Borders class, dedicating her time to learning more about what it’s like opening a business in another country. Asito also said the differences in teaching styles between American and Spanish teachers give her more perspective.

McDonald, a physical therapy major, said she customized her classes to be more liberal arts–oriented. Because McDonald had earned so many college credits in high school, she had much more freedom when choosing her courses. Two of McDonald’s classes focus on the city of Barcelona, and her third is in psychology.

Grant, an environmental studies major, is completing mostly general education courses while he studies abroad, aside from his Mediterranean Oceanography class, which is applicable to his major.

Asito said her most meaningful and challenging experience was the first week of moving in. She said it took time getting adjusted to a new culture in a new city and figuring out what to do with her time when she wasn’t in class or doing coursework. Although not her favorite memory, she said it was an important step in traveling.

So far, McDonald said she greatly enjoys her class, Barcelona: the Cosmopolitan City, a course that examines the culture of Barcelona and how its history has influenced the culture.

Although it’s barely been two months since their arrival in Barcelona, Asito, McDonald and Grant all recounted ways the culture has impacted them. For example, McDonald said the people do not view personal space as a barrier, but rather they come very close and make plenty of physical contact. In addition, she said, Spaniards talk more and even talk over each other, which is typical and not considered rude in the least.

In terms of communication, she said she was happy to find that people are nice and helpful despite the language barrier.

“The second they hear you try to speak Spanish, they’ll have a huge smile on their face and try to use their English,” she said.

In addition, she said they are very direct. In America it would be considered impolite to ask people outrightly about their religious or political beliefs, she said this is commonplace among Barcelonians. She said they don’t hold back with their questions, and therefore, she definitely has to think on her feet.

Grant, who is originally from the countryside of Maine, said he was surprised to discover how much he enjoys the city life in Spain. He said unlike New York City or Chicago, where there’s constantly a sense of urgency, it’s much more relaxed and slow in Europe. No meal is under an hour and a half, and people are noticeably more laid-back, he said.

“I didn’t think I’d like the bustle of the city, but here it’s a smaller city,” Grant said.

Grant also said getting to know the people and the students who live in the area has made a mark on him.

“It’s always interesting to see how cultures are different and making friends with those people from different cultures,” he said.