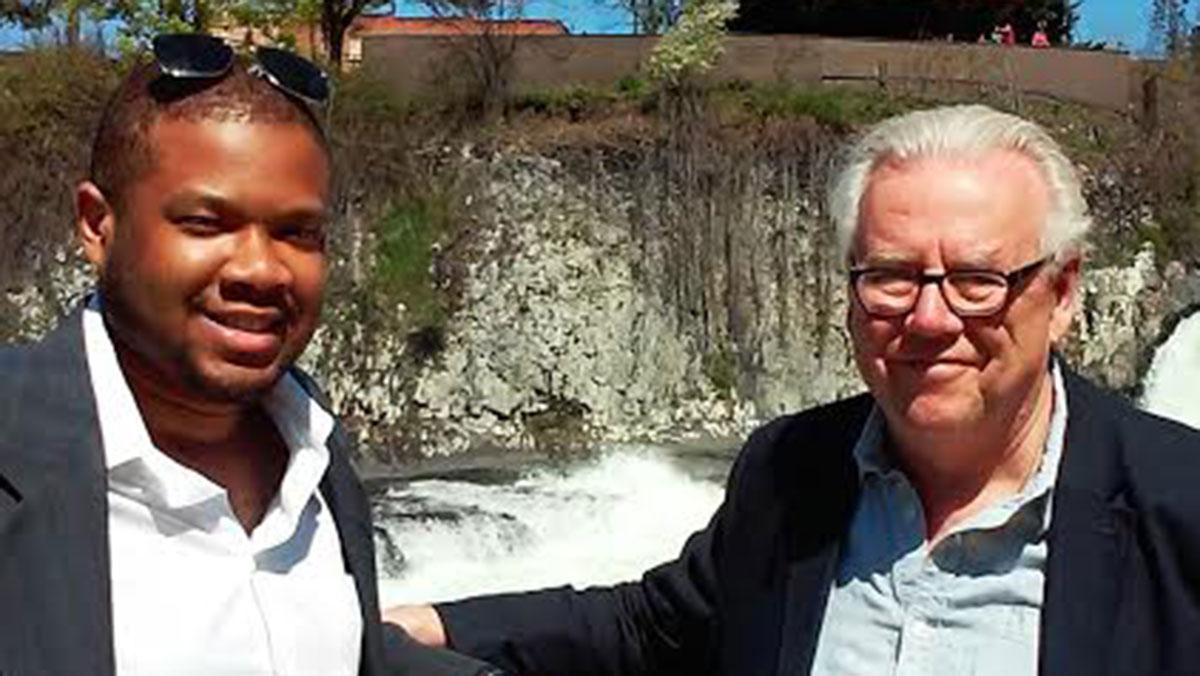 “It was absolutely crazy,” senior Curt McConnell said. “It was like a nerd paradise.”

McConnell was one of 11 students from Ithaca College to attend and present at the National Conference on Undergraduate Research from April 16–18 in Cheney, Washington.

Robert Sullivan, associate professor and chair of the communications studies department, said the purpose of the conference, held this year at Eastern Washington University, is to give the students that attend an experience in publicizing the independent research they’re doing on campus. He said the students who go don’t just present a good paper they’ve written, but an on-going project they’ve been pursuing on their own. Often the college sends students from five or six different majors, he said.

The student presenters were chosen by their professors, who suggested they each submit an abstract on their best work they felt was worthy of publication. Sullivan said this typically happens through a mentorship between a student and faculty member.

When students present their work during the Whalen Symposium, he said, they’re performing in a comfortable, familiar environment. However, he said presenting at the NCUR is a different experience entirely.

“For many [students], this will be their first experience in a conference outside of the comfort zone of Ithaca College,” Sullivan said.

McConnell worked with professor Susan Allen-Gil on his presentation, “Testing the Efficacy of Swistrack for Detecting Alterations in Fish Behavior from Psychoactive Pharmaceuticals,” which discusses the effects that psychoactive substances have on the behaviors of fish. He said at the conference everyone in his field of study with similar 15-minute presentations involving fish behavior presented around the same time.

“When you’re grouped in with a bunch of other people that are doing similar research, I’ve noticed that a lot of other people in behavioral toxicology are doing such novel stuff that they haven’t shown to anyone else,” McConnell said. “So it’s really inspiring, and you can really build off your own research on what other people’s ideas [are].”

Both of Cummings’ presentations at the conference were sponsored by Christopher House, associate professor in the Department of Communication Studies. The first one he gave, “One Love: A Rhetorical Analysis of Bob Marley’s Music,” analyzed Bob Marley’s album “Legend” using three different theories: the rhetoric of love, Afrocentrism and power relations. Cummings’ second presentation, “Out of Many One People,” built on the notion that it doesn’t matter who a person is, everyone is connected. In this presentation, he specifically spoke about cultural expression in the form of resistance, especially through music and the arts.

This is Cummings’ second NCUR conference, and he said both presentations went well for him based off the feedback he received from people afterward.

Themea presented two projects April 17: “The Race Question: A Case Study on Ideological Rhetoric,” under Ozge Heck, assistant professor in the Department of Communication Studies, and “Time to Get Off Track,” under Elizabeth Bleicher, associate professor of English and exploratory program director. His first presentation involved the analysis of the types of arguments that conservative and progressive political figures use during debates and broke these arguments down to answer the question of whether this is really the best way to discuss race or not. The second presentation was about the tracks that children are put on at a young age in their educational system and the implications that might come out of it in the future, such as wanting to drop out.

Kuperman, whose presentation involved ethics in fantasy sports journalism, worked under Mead Loop, associate professor and documentary studies program coordinator. Kuperman said Loop asked him to attend the conference after he became involved in his research last spring. He said it was an incredible experience from day one because he was able to see presentations from students all over the country.

The main idea, Kuperman said, is not just going to the conference to show off your own work but to see what everyone else has to offer as well.

Sullivan said the conference, of which he has been a part for five of the last six years, embodies the ideas that the college pushes for students: undergraduate research, internships and opportunities for independent research. He said he believes the conference has the potential to be a “high-impact educational experience” for students.

Themea said after reflecting on his work and receiving feedback, he found validation in his research.

“I was really nervous going up there, because come on, I’m a white straight man talking about race, what could go wrong?” Themea said. “But the audience was very receptive … and I feel very confident in moving forward and developing this forward and maybe presenting this again next year.”