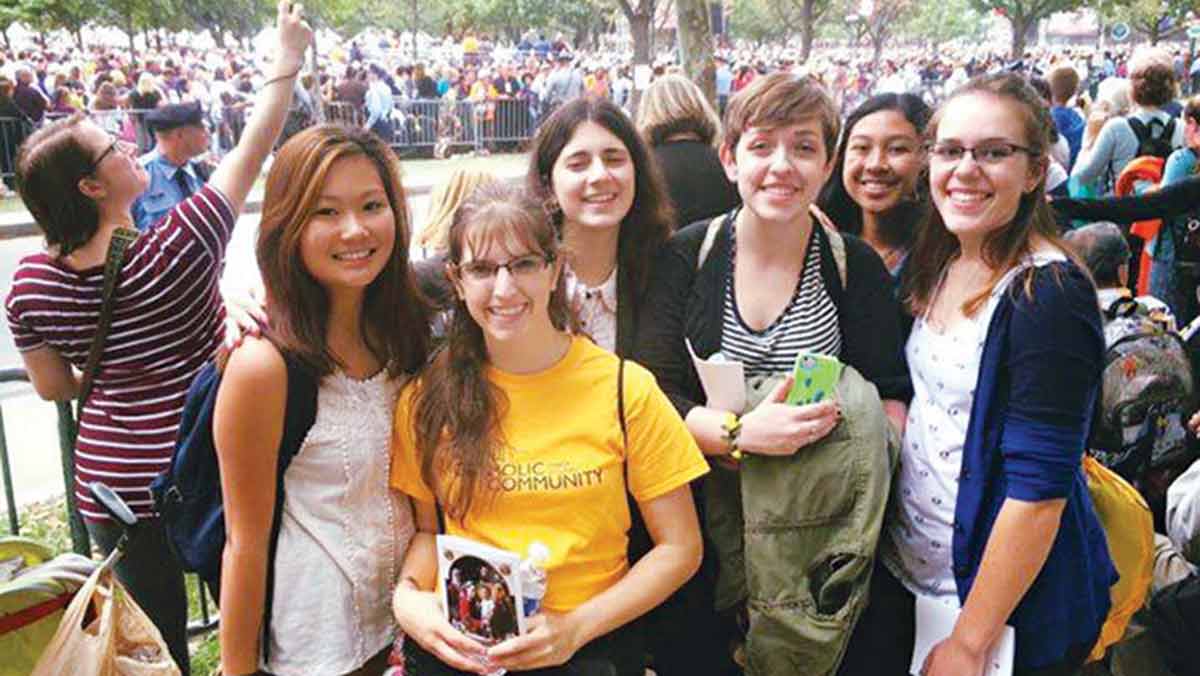 Courtesy of Angela Poffenbaugh
Six members of the Ithaca College Catholic community pose for a photo in Philadelphia where they traveled to see the pope.
By Maura Aleardi — Staff Writer
Published: September 30, 2015

Ithaca College senior Michael Rizk stood on the Benjamin Franklin Parkway in Philadelphia on Sept. 27 as the pope proceeded down the street toward the altar where he would celebrate Mass with over 2 million people.

“When I saw him drive by, I put my phone down and I just saw him face to face and I cried,” Rizk said. “It’s one of those things that you can hear about as much as you want, but it’s something completely different seeing such a joyful man — pretty powerful.”

Rizk was one of the 27 members of the college’s Catholic Community that bussed five hours from Cornell University to see the pope. About half of the group got into the Mass, while the other half spread across the city and watched the Mass on jumbotrons.

The college’s Catholic Community includes about 150 students who attend Sunday Mass, David Holmes, the campus minister for the Ithaca College and Cornell University Catholic Community, said. The community worships together and plans programs for the group and other students on campus who may be interested in learning about Catholicism.

The papal Mass was the last stop for Pope Francis during his visit to the United States. During the visit, the pope also traveled to Washington, D.C. and New York City.

On his final day, Pope Francis spent his time in Philadelphia. He attended a meeting with bishops at St. Martin’s Chapel, where he addressed criticism from the public about his previous comments on how bishops handle sexual assault. He then visited the Curran-Fromhold Correctional Facility before heading to the Benjamin Franklin Parkway for the papal Mass. 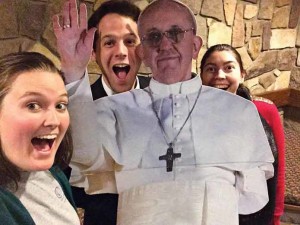 Kuzdzal said although she didn’t see the pope in person while in Philadelphia, she felt overwhelmed by his presence, specifically during the Eucharist, which is the part of Mass when the priest honors the Last Supper by giving bread and wine as the body and blood of Jesus Christ.

Kudazal said one of the main beliefs of Catholics is that bread and wine taken at communion actually become the body and blood of Christ.

“That’s a thing a lot of people struggle with, including myself, but in that moment, watching on the Jumbotron, I had not a doubt in my mind.” 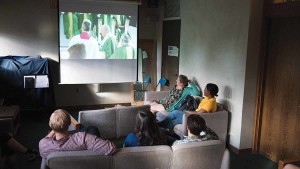 Rye Bennett/ The Ithacan Members of the Ithaca College Catholic Community watch a live stream of the pope’s Mass Sept. 27 in the Phillips Room of the Mueller Chapel. Twenty-seven members of the community went to Philadelphia.

Holmes stayed on campus with several other members of the Catholic Community and watched the live stream of the Mass. He said he had obligations on campus but would have liked to go and experience the atmosphere Kuzdzal and Rizk described.

“There’s just a cool energy about this,” Holmes said. “I would compare it to going to a sporting event versus watching it on TV. There aren’t that many people in the world that wouldn’t want to go to that sporting event because it’s just a different energy … You feel a part of the situation when you’re actually there.”

Regardless, he said he enjoyed watching the live stream and was surprised by the pope’s use of diversity throughout the Mass.

“I was a little shocked by certain parts of it,” Holmes said. “I didn’t know Pope Francis was going to give his homily in Spanish. Overall I thought it was a good representation of the United States as a whole because of the fact that he kind of touched on so many different areas, specifically in his homily.”

The pope’s powerful messages are what make him stand out from past popes, Kuzdzal said. She said she especially appreciates his message that Catholics are not anti-gay. Pope Francis has become an outspoken supporter for more acceptance and progressiveness in the Catholic community.

Pope Francis was able to share his passion for environmental justice with both Congress and the United Nations.

“I don’t know if anything will be changed, but I hope that maybe it sparked a little bit more interest in the hearts of the Congress people,” Kuzdzal said.

Rizk said he commends Pope Francis for his ability to remain humble and focused on spreading awareness of these issues while in such a powerful position.

“He’s the people’s pope,” Rizk said. “He has a connection with people, especially with the marginalized. He doesn’t get caught up in being pope. He gets caught up in more of his duty, rather than his role.”

Pope Francis’ determination to advocate for so many causes is a perfect representation of the Bible’s message, Holmes said.
“I personally feel that the [overarching] message of the Gospels is an unconditional love,” Holmes said. “One of my favorite Bible verses is ‘Love one another; as I have loved you.’ I think this particular pope is highlighting the fact that [there are] so many parts of society we aren’t doing that to. Pope Francis has been, ever since he became pope, trying to bring the marginalized to the forefront of the Catholic Church.