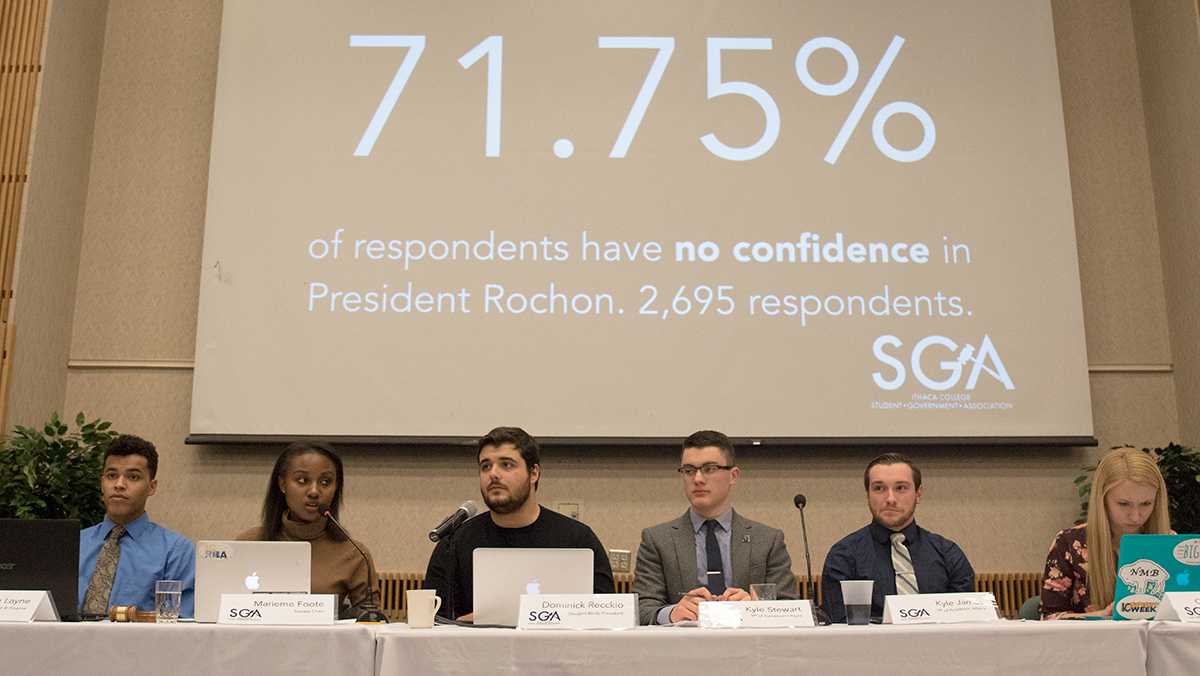 Yana Mazurkevich/The Ithacan
Members of the Ithaca College Student Government Association answer questions about the results of the student no confidence vote from the audience in Emerson Suites on Nov. 30.
By Kyle Arnold, Max Denning — Assistant News Editor and Staff Writer
Published: November 30, 2015

More than 2,500 Ithaca College students — or 71.75 percent of the vote — have voted “no confidence” in President Tom Rochon.

The student vote of no confidence comes after a semester of student protests regarding the racial climate on campus. The student protest group POC at IC called for Rochon’s resignation and has stated it would not engage in dialogue with Rochon or his administration. The protests began after off-campus fraternity Alpha Epsilon Pi planned a party with a racially charged theme, and a black female alumna was called a “savage” by other panelists at the Blue Sky Reimagining Kick-Off event Oct. 8.

Tinita Wheaton, information systems manager in the Office of the Registrar, originally sent the Student Government Association the emails of 6,896 students to receive the poll. Garrett Downing, First-Year Experience program coordinator and the adviser of the SGA, said 11 students emailed the SGA and said they didn’t receive the email, accounting for a total of 6,907 students who were sent the vote. 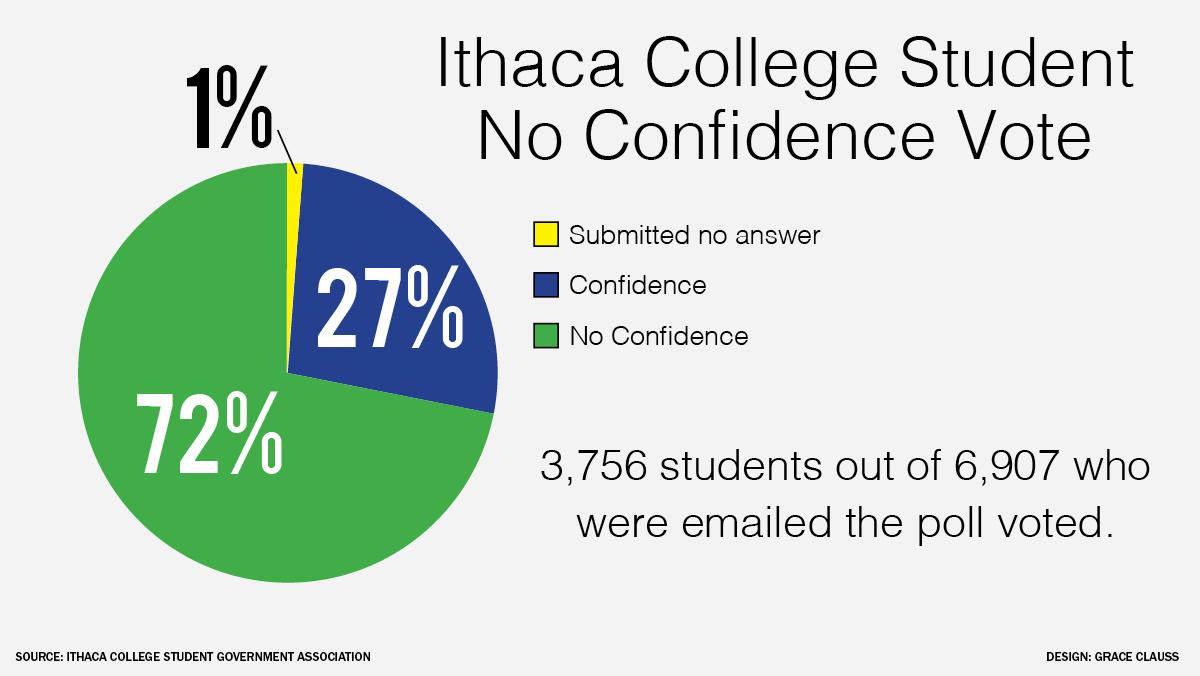 The results were announced at the SGA Senate meeting Nov. 30.

Cheers rang out from the audience after the results were released.

The School of Business professors were also the only school to vote against holding the faculty no confidence vote, The Ithacan reported Nov. 4.

SGA President Dominick Recckio said the results will help dictate his priorities as SGA president for the rest of his term.

“You can bet your $58,865 dollars that I am going to do everything that I possibly can to remove President Rochon from his office as president of Ithaca College as soon as possible,” he said.

Students attending the event expressed excitement after the results were released. Junior Amanda Lai said she was pleased with the results.

“I believe the majority of the students have no confidence,” she said. “I’m hoping that this no confidence vote will have a big impact.”

She said she is excited to see what happens next.

“I think it’s the step in the right direction,” she said. “This is definitely one of the best moves.”

Freshman Jaysha Patel, who did not attend the Nov. 30 meeting, said she participated in the online vote and voted no confidence after brief apprehension.

“As a freshman, I don’t know much about him, but after talking with POC members and other people at Ithaca College, I learned more about Rochon and did my own research and came to the conclusion that I wanted to vote no confidence,” she said.

“I keep hearing different things, but I want to have an opinion of my own,” Twardziak said. “I just didn’t have enough information.”

Michael Traugott, a research professor in the Center for Political Studies at the University of Michigan and a former president of the World Association for Public Opinion Research and the American Association for Public Opinion Research, said the average turnout rate for contemporary elections is around 50 percent. The student no confidence vote had a turnout of 53.77 percent.

“A university is not a democracy. Holding a referendum like this is an expression of opinion but doesn’t result in any specific action because of student feelings,” he said. “At the same time, when there are three times as many students who express no confidence in relation to those who do, that, I would say, is pretty suggestive.”

Faculty are also holding a vote of no confidence, which opened Nov. 30 and closes Dec. 11. The results of the faculty vote will be released Dec. 14. Some faculty have expressed concern about Rochon’s handling of racial issues on campus, his strategic vision for the college and his perceived autocratic leadership style.

David Maley, senior associate director of media relations, provided a statement to The Ithacan in response to the vote on behalf of the college:

“The Board of Trustees has begun a process of talking with members of the Ithaca College community about their thoughts and concerns, and President Rochon respects and supports that process. In the meantime, he remains focused on doing everything he can to support efforts to create a more welcoming and inclusive community for everyone.”

Recckio said the SGA executive board met with Tom Grape, chair of the Ithaca College Board of Trustees, and David Lissy, vice chair of the board of trustees, on Dec. 2. Recckio said the meeting was productive and he thought that Grape and Lissy were receptive to the results of the vote.

Grape and Lissy provided a statement to The Ithacan regarding the student vote:

“This evening, the Student Government Association released the results of a student vote expressing a lack of confidence in President Rochon. As we noted before Thanksgiving, over the last couple of months, we have sought and received input from students, faculty, staff, alumni, and parents about the right course of action in light of recent events, and we continue to do so. The confidence votes are one way for students and faculty to make their views known to us, but community members have also shared thoughts and ideas with us directly, through in-person meetings and by email.

“We are grateful to the Ithaca College community for participating in this discussion. As the discussion continues, we ask the IC community to support civil discourse and an open exchange of ideas and perspectives as together we aim to improve the college that we all care for so deeply.”

The SGA will also be hosting Values Sessions Dec. 3, 8 and 10 from 12:10 to 1:05 p.m. in Room 302 of Williams Hall to give students the opportunity to discuss what students value in a president. They hosted their first value session Dec.1, but only SGA members and student media attended the event.

Recckio said the results make the feelings of the campus clear.

“If that large of a percent of the people that you are supposed to lead don’t believe in you, it’s time to go, and it’s time to go fast,” Recckio said. 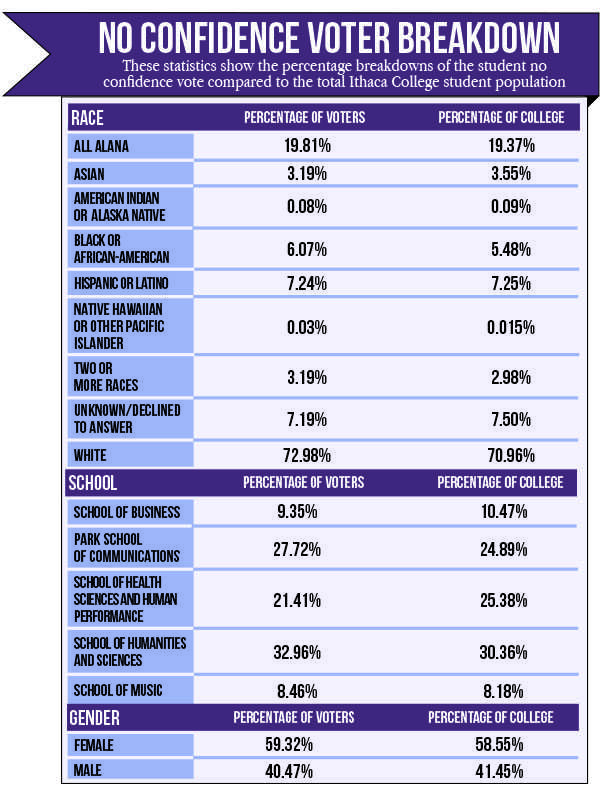