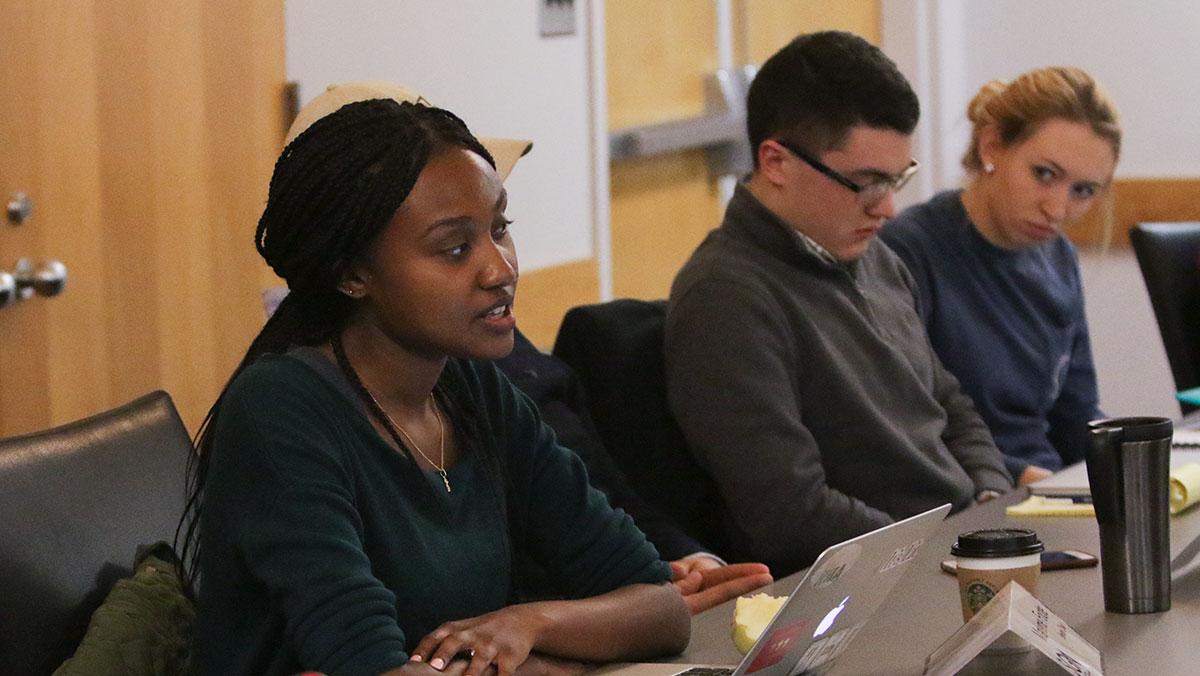 According to a recent survey, the general public believes women are just as qualified as men to be political leaders but that they face unfair obstacles when trying to obtain leadership positions against male competitors. Groups like Girl Up, a new student organization at Ithaca College, are trying to help women break through these roadblocks.

According to a women and leadership study conducted by the Pew Research Center in 2015, 38 percent of Americans believe women are held to higher standards during the climb to the top of the political ladder. About 37 percent also believe political positions aren’t ready for female leaders.

Freshman Sky Hollenbeck said through her experiences talking with other women about politics, she believes they have just as much of an interest and the ability to be successful in politics as men do.

Hollenbeck is the president of Girl Up, one of many chapters at American colleges sponsored by the United Nations. She described the group as one that promotes health, safety and education in developing countries by fundraising and raising awareness.

Hollenbeck said Girl Up is not only a great opportunity to help other women around the world, but it can also serve as a way to help women at the college become leaders in their communities to spread Girl Up’s message.

“A big part of Girl Up is the advocacy and teaching women how to be leaders and how to use their voice — and that has everything to do with politics,” Hollenbeck said. “I think, a lot of times, women don’t think that they have a voice and don’t know how to use it, and that’s why they’re not as involved in politics.”

Sophomore Yena Seo is a member of the Model United Nations team and said she has a deep interest in international politics but notices an absence of women getting involved. She said this might be due to a lack of other women being able to set political precedents for young girls.

“In the United States and around the world, there are so few female political leaders, and women are systematically shut out of what still is a good ol’ boys club,” Seo said, “However, I’ve encountered many brilliant females who are heavily involved in — and have a wealth of knowledge about — politics, and they have served as mentors to me.”

Freshman Carlie McClinsey said she thinks the political disparity between men and women has evolved from a lack of opportunity for women to thrive in the national political system. She referenced the underrepresentation in politics as a possible cause for lack of involvement: Today, only 20 percent of the seats in the House, Senate and Congress are held by women.

“This country started off with men being in politics. We’re trying to become equal,” McClinsey said.

McClinsey is the Student Government Association’s chief of staff and partakes in executive board votes and organizes the meetings. She said she chose to get involved because she wants to make a difference at the college and that she’s never felt left out of the college’s political community because she is a woman.

“If anybody was to ever tell me that I couldn’t do what I wanted to do because I was a woman, I would tell them that I don’t care about opinions,” McClinsey said.

However, she also said there is pressure for her to work harder to prove that she is capable as a woman to be involved in campus politics. She said she just recently dyed her hair, which was previously blonde, because she felt the “dumb blonde” stereotype was affecting the way people worked with her.

Dominick Recckio, president of the SGA, said he believes there are still social barriers that women face in politics, business and on campus. He said the majority of SGA is male and that there are only two women on the executive board.

“In conversations about the next IC president, around three-fourths of the people I speak to refer to the next president as ‘he,’” Recckio said. “This is an issue that exists within our consciousness that we need to address.”

Patricia Rodriguez, associate professor in the Department of Politics, said the results of the study could be affected by the structural inequalities women face to pursue political careers and to have political interests.

“There are also broad cultural perceptions that politics is not the realm of women,” Rodriguez said. “This, on top of other discriminations — sexual preference, classism, racism — that intersect with gender, helps explain the lack of representation in politics.”

“I think women are powerful,” McClinsey said. “I have a lot of faith in my gender and of anybody who identifies in my gender.”