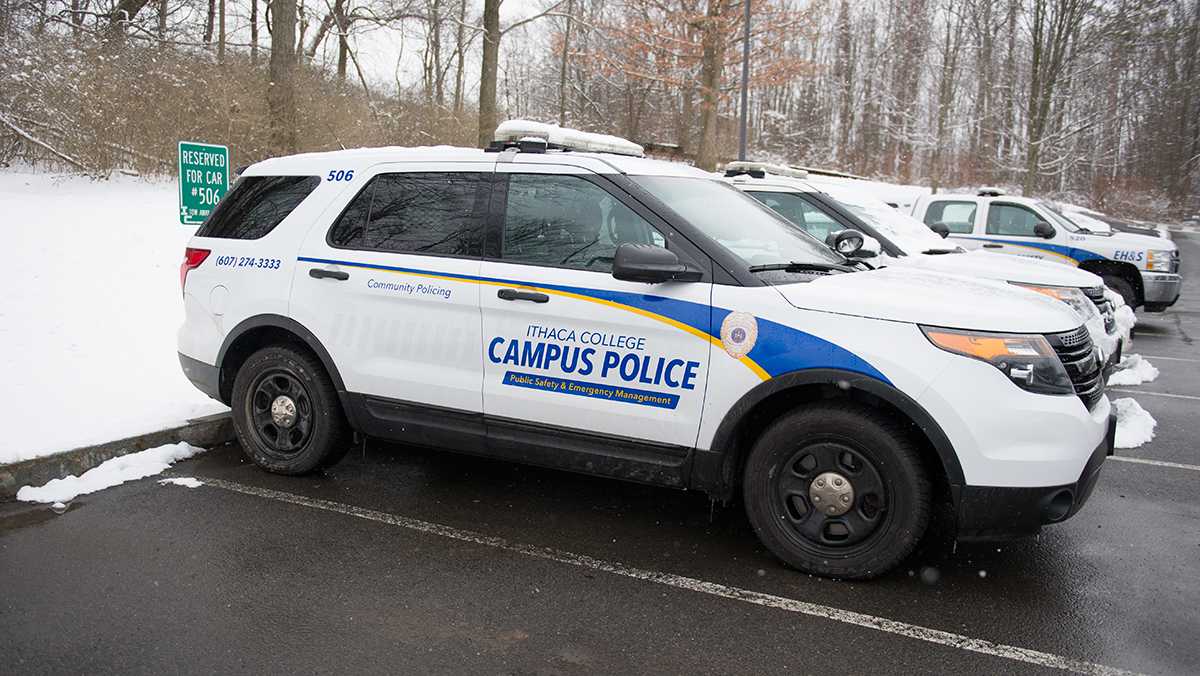 Tommy Battistelli/The Ithacan
A workgroup formed between the Office of Residential Life and the Office of Public Safety and Emergency Management is currently focusing on the creation of a community review board to address concerns regarding Public Safety.
By Jessica Ferreira — Staff Writer
Published: February 9, 2016

A work group formed in October 2015 between the Office of Residential Life and the Office of Public Safety and Emergency Management is currently focusing on the creation of a community review board to receive and make decisions about concerns regarding Public Safety.

In response to alleged racial profiling during the resident assistant summer training and reports of police brutality, coupled with the semester-long protests over racially charged controversies, Ithaca College has listed a series of “Action Steps” on diversity and inclusion to be taken in order to make the campus a safer space for people of color, including the community review board, body cameras and improved RA training.

Roger Richardson, associate provost of diversity, inclusion and engagement and interim chief diversity officer, said the board identifies the legitimacy of complaints brought forward and decides how they will be investigated.

Stewart said several groups on campus, including the work group, are putting together the community review board, which was announced Sept. 6, 2015, by President Tom Rochon.

“It’s being developed based off research of other models and trying to customize a model that works here at IC,” Stewart said.

While Richardson believes this may be beneficial, the work group is considering the possible implications of conflict of interest regarding the presence of Public Safety representatives.

Richardson also explained that an aim for the review board is to have the campus community involved and informed of any major issues brought forward. However, some information may be withheld, depending on the decisions of the board.

A draft of the review board’s policies was read by the work group at its meeting in the beginning of February, with the hopes that implementation of the community review board will take place in the Spring 2016 semester.

Koenig and Kerry declined to comment, saying they did not have additional information to share following interviews with Stewart and Prunty.

“The role of the work group is that at some point, we will be providing some input and feedback … about what the policies might look like and how the body camera footage might be used,” Prunty said.

began to rise on the campus. While many students and officers appeared to feel safer with the body cameras, others reported feeling as if their privacy was being violated and that it could create negative pressure on officers.

The Public Safety and Residential Life work group has also been working on revamping the RA training program. RA training for this semester took place Jan. 19, with some changes to the program, including a component of diversity education, as well as more respectful language concerning subjects such as race, Stewart and Prunty said.

“The process was a really good one because one of the goals of the work group is to really look for opportunities to create more interaction between Public Safety and Residence Life staff, as well as continue to build positive working relationships,” Prunty said.

The work group plans to make larger changes to the RA training program for this August, when a bigger group of RAs will be trained. The work group has set a date for a retreat, where staff can meet and revise the August training. During this retreat, they also hope to plan for more teamwork between Residential Life and Public Safety in other areas of the program. Stewart and Prunty did not disclose the date of the retreat.

The work group is also working to better improve freshman orientation so it is more inclusive of African, Latino, Asian and Native American students. Currently, they are creating FAQs on language and cultural competency and awareness for the orientations.

The work group has yet to work directly with POC at IC, Stewart said.

Richardson said the campus has increased its levels of diversity substantially in recent years. However, the campus is struggling greatly with retaining students of color and making them feel welcome — an aim of the work group.

“It’s important that we don’t only have to work to increase underrepresented individuals here at the college, but also to support and nurture and grow to develop them to be successful while they’re here,” Richardson said. “A lot of the discourse and the dialogue from our students last semester is basically telling us that we’re not doing a good job at the inclusion aspect of this effort.”