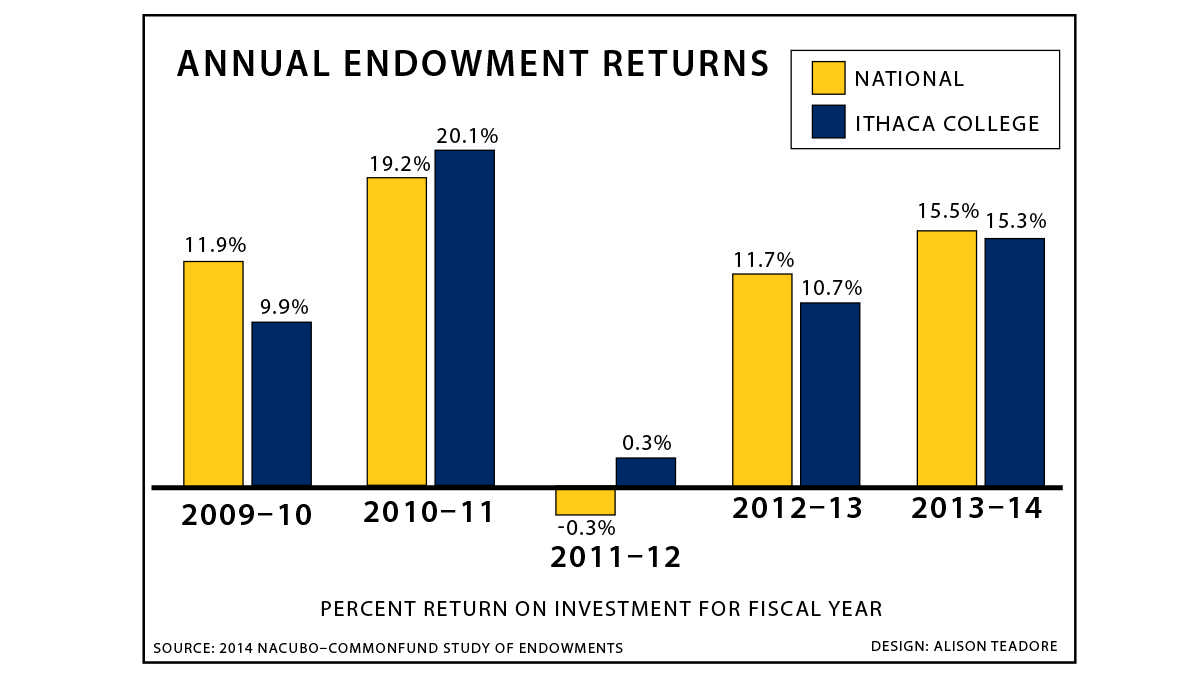 Design by Alison Teadore/ The Ithacan
A recently released study from the Nacubo-Commonfund Study of Endowments showed a second strong year nationally for institutions’ endowment return on investment, standing at 15.5 percent for the 2013–14 fiscal year and 11.7 percent in 2012–13. Robert Cree, associate vice president for business and finance, said the college’s endowment returns were at 15.3 percent for 2013–14 and 10.7 percent in 2012–13, matching the national numbers.
By Kayla Dwyer — News Editor
Published: February 19, 2015

As Ithaca College sees a second strong year for its investments, students will be taking up the cause of alumni relations and philanthropy in an annual, regional conference held at the college.

For the first time, the Council for Advancement and Support of Education’s Affiliated Student Advancement Programs conference for District 2, consisting of several Northeastern states and Ontario, Canada, will be held Feb. 27–28 at the college.

Ithaca’s Students Today Alumni Tomorrow is hosting the conference, which invites student alumni groups, ambassadors and spirit organizations from across the region to participate in a weekend of seminars and speeches geared toward involving students in institutional advancement practices such as alumni relations and marketing.

Fostering alumni relations plays into supporting the college’s endowment, which has returned a second strong year on its investments.

The endowment is the collection of funds put into these investments or given by donors, Steve Savage, associate vice president for institutional advancement, said. While not all donated contributions are to the endowment, the ones that are are used in a way that is agreed upon by the college and the donor, he said.

A recently released study from the Nacubo-Commonfund Study of Endowments showed a second strong year nationally for institutions’ endowment return on investment, standing at 15.5 percent for the 2013–14 fiscal year and 11.7 percent in 2012–13. Robert Cree, associate vice president for business and finance, said the college’s endowment returns were at 15.3 percent for 2013–14 and 10.7 percent in 2012–13, matching the national numbers.

Gerald Hector, vice president for finance and administration, said the return on investment is a measure of the performance of the college’s stocks and company investments for that fiscal year. Thus, each return percentage should be thought of as separate and not part of a linear trend, since the measurements start over each fiscal year and are dependent on both the economy and smart investing.

“This year we’re at 15 [percent] because the stock market now is the highest it’s been — over 18,000,” he said. “The stock market doesn’t follow a normal pattern or rubric.”

Savage said one of the priorities for the college’s upcoming comprehensive campaign is to double the endowment through means of philanthropy and general management.

“A strong endowment is what’s going to be necessary in order to really make sure that the college sustains into the future,” he said.

The CASE ASAP conference, he said, shows a commitment to alumni on part of the students and the college, and is also proof of the level STAT has reached as an organization.

“We see it as a great opportunity to showcase Ithaca College and what STAT students have done as far as building an incredibly strong program,” he said.

Lynne Pierce, associate director of alumni relations and adviser to STAT, has accompanied students to past CASE ASAP conferences in other locations and said having it at the college was a competitive process.

“The conference is bringing the district together to show the best of what we have,” she said. “Our campus is made to do this kind of thing.”

The theme of the conference this year, “D2 is Gorges,” plays off the tagline “Ithaca is Gorges,” which was developed by former faculty member Howard Cogan, Pierce said.

Tom Grape ’80, chairman of the Ithaca College Board of Trustees, will be the event’s keynote speaker on the morning of Feb. 28. Carrie Brown, executive director of alumni relations, said having such strong support from the board of trustees for this student-run conference is rare among other institutions.

Junior Alex Cammy, the student director to the alumni board of directors, said he has been to two district and one national CASE ASAP conferences and hasn’t seen that level of support. President Tom Rochon will also be speaking during the conference.

“I haven’t been to a conference so far where the president and chairman of the board of trustees is so involved,” Cammy said.

Cammy said the organization began four years ago as an open club with five members, and has expanded to be a closed organization that has capped its membership to 50 students. He said students also now have to apply and interview in order to become a member.

Cammy and junior Emma Behrans are overseeing the planning for the conference, a process that began over a year and a half ago. Applying to host the conference involved a 17-page bid and a presentation at last year’s district conference, at which the participating schools voted on the host for the following year. Doing so, he said, has been the largest endeavor and commitment STAT has taken on.

These and other activities that Cammy has done, he said, have been enhanced by the dedication of the college’s alumni, the conference being a chance to foster the continuation of this cycle.

“This is a cool opportunity to not only showcase our institution and our facilities but also to give back and start that trend,” he said.