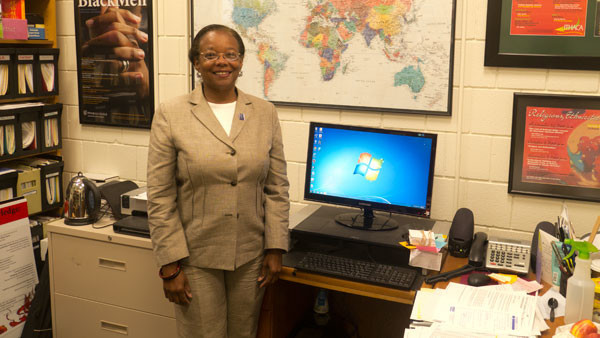 Rochon signed a Memorandum of Understanding, which outlines the terms and details of the agreement, when Mao Xuncheng, dean of the school of finance and business and the assistant to the president of international affairs at Shanghai Normal University, visited the college last week.

Tanya Saunders, assistant provost for international studies and special projects, said the MOU signifies both institutions’ shared interests in creating an Ithaca center at Shanghai Normal University. She said she is excited about the opportunities the center could have for future students.

“It offers the potential of a wonderful experience for our students, and I hope that they start signing up for courses in Chinese language,” Saunders said.

Initially, the program will be geared toward students in the School of Business, and the center would expand its program base from there to include a wider range of courses. Rochon said the center will include classes and internships that students would take alongside Shanghai Normal students.

The college chose to form the partnership with Shanghai Normal because of its ideal location in the financial capital of China. Rochon said Shanghai is a “global city of first rank,” which is important, as the China center will initially attract business students. Unlike most Chinese universities, Shanghai Normal is not specialized, which Rochon said offers a variety of programs to interested students.

The establishment of the China center corresponds with the IC 20/20 goal to develop a satellite campus in the country. Saunders said the center would also provide students with the opportunity to better understand China.

“Our goal is to create opportunities for our students to have both cultural and academic experiences in China, engagement with Chinese students at Shanghai Normal University and experiential learning opportunities, also known as internships, … that help our students understand the global economy and how the world of work is changing,” Saunders said.

Rochon said the censorship would not impact the students studying in China.

“Our students will be permitted to study and explore the topics in which they’re interested,” he said.

Though the college has invested in the program, Rachel Cullenen, the director of study abroad at the Office of International Programs, said while students have previously had the opportunity to study in China through other programs, few have expressed interest in recent years.

“Every semester we have a few [students], two or three, [studying] in China,” Cullenen said. “It’s rarely more than that.”

In the summer of 2012, Cullenen said, eight students participated in one of the faculty-led programs. In the fall of 2012, three students studied abroad in China. However, during the Spring 2013 semester, there were no students who elected to study in China.

The students who have studied in China went through exchange programs as well as affiliated and unaffiliated programs. Faculty members like Hongwei Guan, associate professor of health promotion and physical education, and Hormoz Movassaghi, professor of finance and international business, have conducted two-week programs in China during the summer term over the past few years.

Despite dwindling numbers of students studying abroad in China, Rochon said the college’s past experience with students studying in China cannot be compared to the potential center, which would be an extension of the college rather than an affiliate program through another school.

“China is America’s most important economic partner,” Rochon said. “It’s bound to become an evermore important global power, and it’s one half to the world of success in the future involves understanding China well,” Rochon said.

Unlike with the college’s London and Los Angeles programs, students currently have to arrange to participate in a China program by themselves. However, with a center, students would be able to apply in the same way they would for the London or LA programs because it would be an extension of the college.

“Having a center means that you have Ithaca College faculty, the credits automatically count, we’ll be offering internships in combination with course work, and these internships will be in a country that will enable students to understand how to work with our largest international partner,” Rochon said. “I have to insist any comparison to what we’ve offered in the past related to China is not relevant.”

Rochon said he is not at liberty to speculate when the China center would be open to the students because he has not made any concrete plans with Shanghai Normal yet.

“We haven’t actually negotiated the center with Shanghai Normal,” Rochon said. “What we’ve done is sign an agreement in principle. Our desire to negotiate the terms of that center and that conversation has not yet begun, so it would be premature for me to speculate when the conversation will be finished.”

Saunders said an understanding of China is crucial because of its close ties to the U.S.

“We can’t ignore China, thus we have to better understand China,” Saunders said.