Ithaca College to take action against sexual assault through campaign 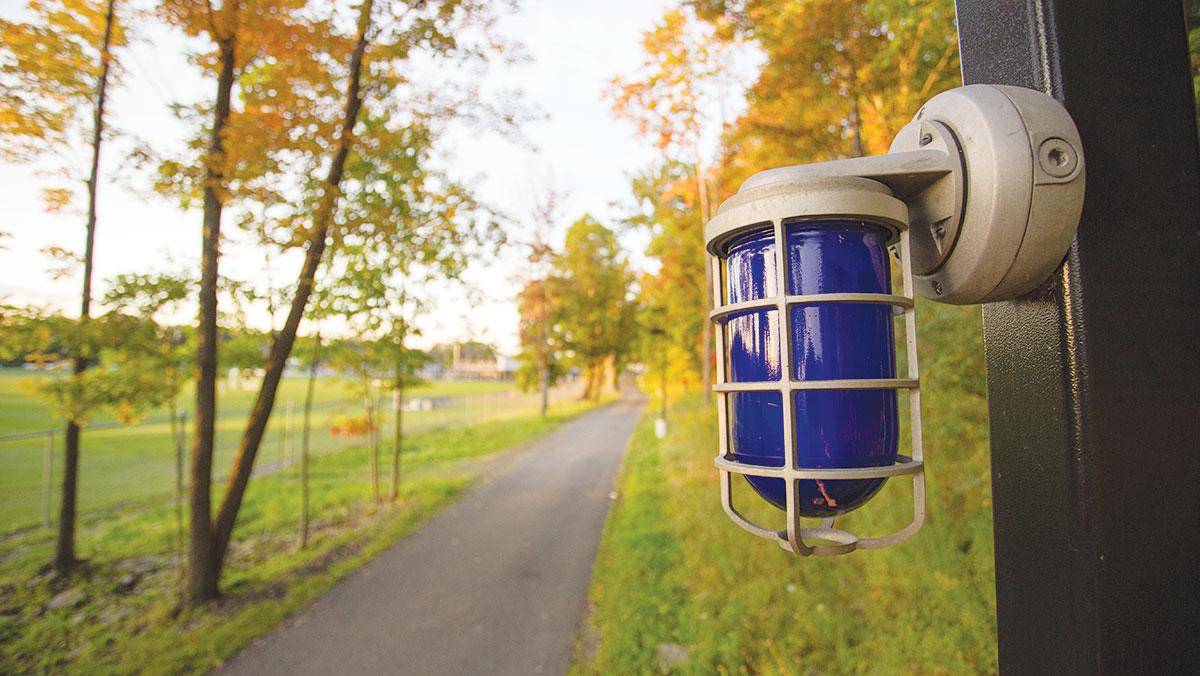 Tucker Mitchell/The Ithacan
A blue light stands at the site of the sexual assault reported Sept. 21, which was reported unfounded Sept. 23, on the walking trail behind Carp Wood Field between Circle Apartments and Terraces.
By Kayla Dwyer — News Editor
Published: September 24, 2014

One day after the White House rolled out a national campaign calling for a stand against campus sexual assaults, the Office of Public Safety and Emergency Management informed the Ithaca College campus about a male-on-male sexual assault that occurred just after midnight on Sept. 21.

On Sept. 23, Public Safety issued an alert update, which said the reported assault was unfounded. The complainant reported that he was not assaulted, according to the alert.

The self-reported victim originally stated that he was sexually assaulted at approximately 12:10 a.m. on the walking path behind Carp Wood Field between the Circle Apartments and Terraces. He was walking toward the northeast direction when the perpetrator came up from behind, pushed him into the woods and sexually assaulted him, according to the Public Safety Alert issued the morning of Sept. 21.

The victim described the assailant as a white male, about 5 feet 11 inches, with medium-length dark-blond hair, blue eyes and long fingers. The perpetrator was last seen wearing dark Toms shoes, black skinny jeans and a white V-neck, according to the victim’s report.

Despite the victim’s recantation, Public Safety says it is continuing to investigate the reported incident.

The facts of this particular incident aside, campus sexual assaults are a subject currently receiving significant national attention.

On Sept. 19, President Barack Obama and Vice President Joe Biden announced the start of a public awareness campaign urging all members of campus communities to be active in preventing sexual violence and to pledge a “personal commitment to help keep women and men safe from sexual assault,” according to the campaign’s website.

In partnership with the Center for American Progress, a nonpartisan educational institute supporting progressive ideals, student leaders from over 200 collegiate institutions in the country have pledged to take part in the campaign.

The White House campaign, titled “It’s on Us,” parallels the goals of the college’s Sexual Harassment and Assault Response & Education initiative to discourage bystander behavior in light of sexual violence on college campuses.

She said the website will gather information that exists on websites for the Center for Lesbian, Gay, Bisexual, Transgender Education, Outreach & Services; Hammond Health Center; the Center for Counseling and Psychological Services; the Office of Residential Life; and Public Safety and sort it into one place for students to search.

“This is a one-stop shop for all things related to sexual harassment and assault-response education,” she said.

The Jeanne Clery Disclosure of Campus Security Policy and Campus Crime Statistics Act, enacted in 1991, requires higher education institutions to disclose campus-crime statistics and information on prevention programs to the community and the Department of Education. The college will publish its next Annual Security and Fire Safety Report on Oct. 1.

The White House Council on Women and Girls reported in January that, annually, an average of just 12 percent of students who are sexually assaulted report the crime to authorities.

The Task Force to Protect Students from Sexual Assault, which the White House established in January, released a report April 29 that gave recommendations for college campuses in responding to the statistic that one in five women is sexually assaulted in college, which the White House Council on Women and Girls reported in January. Stewart said this report prompted the College Advisory Committee on Campus Security & Campus Life Committee, which she co-chairs, to move forward with the SHARE initiative and the creation of the website.

Stewart said the goals of the initiative, which seeks to educate the college community on active responses to sexual assaults on campus, will be solidified once she recruits student participation.

“I would like something that’s symbolic to show that this isn’t just more marketing, this isn’t just the launch of a website, and I don’t think I can do that successfully without the students,” she said.

SHARE is working with the Office of Marketing Communications to get the word out about the active campaign, which will kick off with the website launch, she said. Stewart said she will be presenting the campaign at the Student Government Association meeting on Oct. 6, where she said she will be soliciting student advocates for the cause.

“We need students who are passionate about sexual harassment and assault,” she said.

During the announcement in the White House’s East Room, President Obama said the campaign emphasizes the inclusion of men in the effort, according to The Washington Post.

Stewart said a balanced cohort of student advocacy is important to the mission of SHARE.

“I would love a contingency of male and female students,” she said. “I would really love to see some men step up in our community.”

While the website has been in development since the summer, she said she wants to emphasize that this accumulation of resources is not new.

“We’ve always had it,” she said. “The question becomes: Did everyone know where to get it?”

Luca Maurer, LGBT Education, Outreach & Services program director, said the issues of students having resources available to them and feeling comfortable enough to report these crimes apply to every student demographic.

“I really want to make sure that all members of the campus community understand how to report and what resources we have for them on and off campus,” he said.

Maurer said the LGBT Education, Outreach & Services Center is an example of a resource for students who need a listening ear, regardless of sexual orientation or identity.

“The main thing here is that someone experienced an assault that is absolutely egregious, and there are resources on this campus to support people,” Maurer said.

Junior Lauren Bristow, who lives in the Circle Apartments, said hearing about the sexual assault on the trail localized the issue in her perspective.

“It kind of just changes your perspective of stuff, like things can happen here,” she said.

Dave Maley, senior associate director of media relations, said as of Sept. 24 that the investigation of the Sept. 21 assault is still continuing.