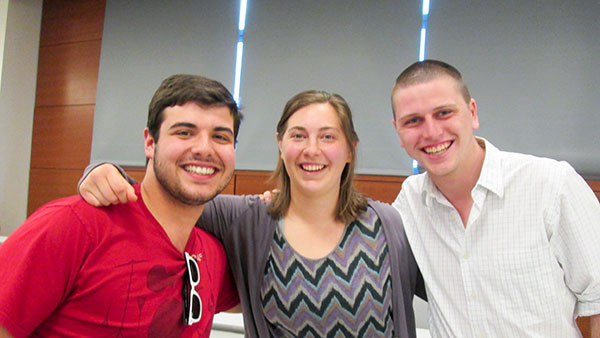 The efforts of junior Dominick Recckio and Moriah Petty ’14 will be recognized when the IC SUW is honored for its work with the United Way of Tompkins County at the annual conference for Student United Way Sept. 12–14 held in Alexandria, Virginia.

Recckio said the young students are the social entrepreneurs who address real community problems by developing innovative ways to solve them.

The IC SUW and the Cornell University Student United Way were among nine student United Way clubs to be presented with the EDUCATION Promising Practice Award on May 15 for their role in working with UWTC to launch the Youth Venture program.

The Promise Practice Awards celebrate student United Way clubs and their dedication to giving, advocating and volunteering to improve the community and the lives of its members, according to the United Way website.

Alison Twang, relationship manager for community impact at the United Way of Tompkins County, said the college won in the education category of the awards for its work with Youth Venture, and Cornell University won the GIVE Promise Practice Award for its work with Summers of Service, a summer job program for local youths.

“We were the only community to have two campuses win awards, so it’s a great honor to receive the award, and it’s really a testament to the great work the students did this year,” Twang said.

Youth Venture is a project of the international organization Ashoka, which supports teams of young high school students as they lead their communities through club, organization and business initiatives, according to the Ashoka website.

Twang said the UWTC partnered with Ashoka’s Youth Venture to initiate the United Way Youth Venture at the Lehman Alternative Community School and Dryden High School as a pilot program.

Recckio, a mentor and leader for the program, said through Youth Venture, he works with high school students to brainstorm projects and help them implement their ideas.

“[Youth Venture] serves as a wonderful springboard for young people to get out there and do something about whatever it is that they care about,” Recckio said. “The issues that they can focus on are endless, and they can really leave an impact on their communities.”

Petty, former president of IC SUW, said the program has a set curriculum for the students to follow but allows for creativity when deciding what social issue to focus on and when creating business designs.

“It was refreshing to see high school students who want to be change makers in their community because they care, not just to add a line to their college application,” she said.

Recckio said he mentored the student groups regularly by helping them plan, develop and initiate the next steps for their business ventures.

Petty said through her role in providing funds for approved Youth Venture projects, she motivates students to continue with activities dedicated to addressing social issues.

Recckio said through Youth Venture, he connected with the students he worked with and became inspired, particularly while working with a group of female students who were advocating for women’s rights.

“The group of girls I worked with at LACS, Sheila and Francesca, were wonderful to work with,” he said. “They consistently inspired me with their commitment to women’s rights and fighting the culture surrounding gender stereotypes.”

Recckio said he plans to grow the program at LACS and Dryden High School in the future. He said he wants more student and community involvement because the program has limitless potential.

“It’s a really unique program that lets students shine in their own positive ways, and that will be a magnet for more and more young people,” he said.