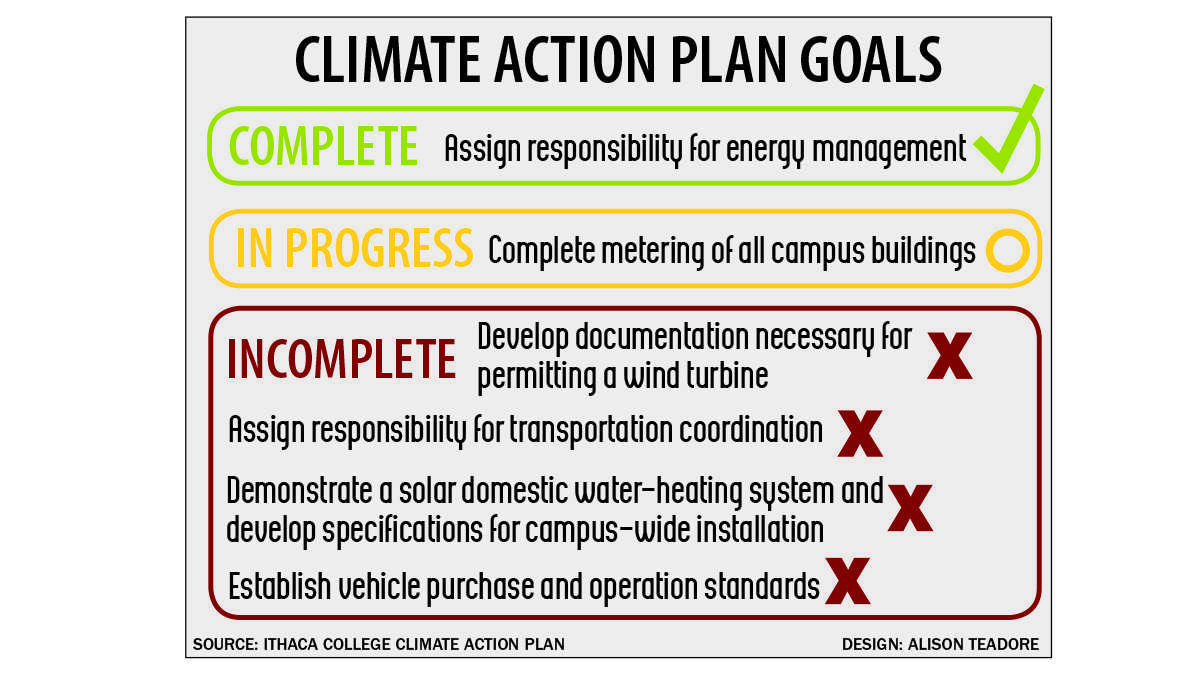 Despite Ithaca College’s goal to decrease total emissions by 25 percent from 2007, records show emissions have increased. This goal, laid out in the college’s Climate Action Plan to become carbon neutral by 2050, is one of several incomplete milestones for 2015.

According to emission reports submitted to the American College and University Presidents’ Climate Commitment, the college’s net emissions for 2007 were 32,629 metric tons of carbon dioxide equivalent. CO2e describes different types of greenhouse gases in one unit, based on how their impact compares to CO2. In 2011 the college net emissions jumped to 44,357 metric tons, the highest emissions have been since reports began in 2000. Though the biennial emissions reports are not yet available for 2013 and 2015, Lew Durland, director of energy management and sustainability, said the college has not met the 25-percent reduction goal.

The college’s 2013 Climate Action Plan progress report attributes a 7-percent increase in electricity usage and an 8-percent increase in natural gas consumption between fiscal years 2012 and 2013 to the Athletics and Events Center, which opened in Fall 2011.

Despite achieving gold standard in Leadership in Energy and Environmental Design from the U.S. Green Building Council, Durland said the A&E Center is the college’s most energy-consumptive building.

Durland, who is currently in the first year of his position at the college, said staff changes over the five-year period contributed to missing the goals. He said those who worked on sustainability were not structurally coordinated and worked out of different offices.

Marian Brown, the college’s former special assistant for campus and community sustainability, is now the director of the Center for Sustainability and the Environment at Wells College, where she said sustainability is valued more.

Brown said the college could do more to use its LEED certified buildings as an educational tool.

“We haven’t really done enough to have the occupants of the building understand that they have a role,” she said.

Brown said challenging new students to reflect on their habits and to live more sustainable lifestyles should be an expectation of coming to college.

Wells also has a goal of becoming carbon neutral by 2050, according to the ACUPCC. “Wellspring,” the newsletter from the Center for Sustainability and the Environment, is featured on the homepage of the Wells College website. Ithaca.edu has no immediately apparent content or links to sustainability information on the homepage or under any of the main tabs.

To keep the college on track, Durland said he is developing a strategic plan, similar to the action plan, that will have more detail on how things will get done.

“The Climate Action Plan is really the way for us to get to climate neutrality,” Durland said. “I want to consider the social justice issues as well. We’re trying to level the playing field so people who live far away can get to campus without having to drive their cars.”

College employees can ride the Tompkins Consolidated Area Transit bus on a free, unlimited basis using their employee ID, according to the Office of Human Resources. Monthly unlimited bus passes for employees who use Ride Tioga and Chemung Transit are also offered.

Kelly Dietz, assistant professor of politics, commutes 18 miles one way from Cayutaville. She said she would use the bus more if the routes were more convenient.

“The faculty bus pass is terrific,” Dietz said via email. “I would use it if it extended to the Mecklenburg park and ride bus stop, which is 6 miles from [my] house. But the closest such stop is Enfield, and at that point I am more than halfway to work.”

As part of his strategy, Durland said he is excited to bring more renewable energy to the college. The current action plan puts off solar photovoltaics for future consideration due to unfavorable economics. Durland said the cost of solar has since improved, and it is less intrusive than wind turbines.

“I’d like to explore doing solar over some parking lots,” Durland said. “Then you can park your cars underneath them to keep cars cool, and you already have a pretty unsustainable space … do something good with it.”

Durland said it is unclear when the college will implement solar energy.

In addition to implementing renewable energy and increasing use of public transportation, the action plan calls for cultural change.

“I want to get everybody thinking about sustainability to the point where they don’t even think about it, so it becomes just part of what you do,” Durland said.

Junior Erika Bucior, student director of the Ithaca College Eco-Reps Program, said changing everyday habits is a simple way for students to get involved with sustainability.

“Taking shorter showers in your dorm, wasting less food in the dining hall and turning off computers and projectors in your classroom all add up to our campus energy usage,” Bucior said via email.

Goals for the years 2016–25 in the Climate Action Plan include another 25-percent reduction in emissions — 50 percent overall from 2007 — installation of solar domestic water-heating systems for residential and dining facilities, construction of two commercial-scale wind turbines and obtaining alternative-fuel vehicles for the campus fleet.