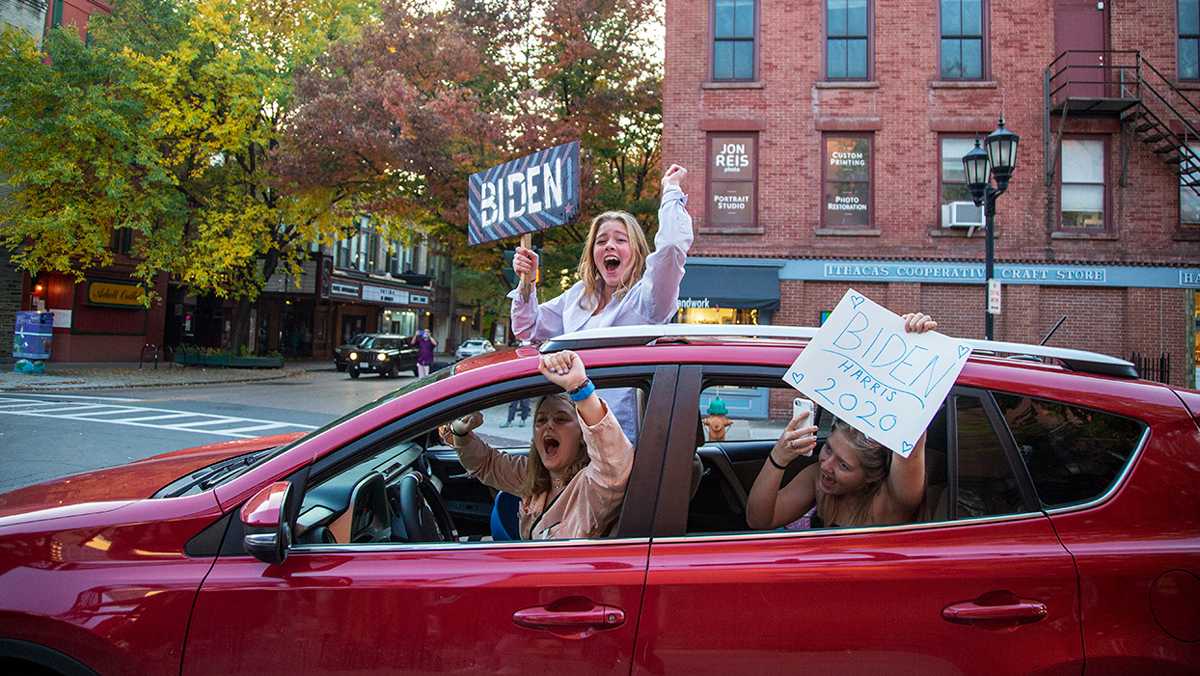 A sense of relief and exhilaration filled the air Nov. 7 at the Bernie Milton Pavilion on The Commons in Ithaca, only an hour after U.S. President-elect Joe Biden secured the projected win over President Donald Trump in the 2020 presidential election.

Pride flags, Black Lives Matter flags and flags supporting Biden and Vice President-elect Kamala Harris billowed behind cars as they drove down Green Street with passengers hollering out of the windows. The crowd members on The Commons raised their fists in solidarity and looked toward the stage for the Every Vote Counts rally. The event was planned before organizers found out, only an hour before the rally, that Biden won the election.

After officials close to Trump said that he will likely not formally concede the election, the rally was organized to demand for every vote to be counted and a peaceful transfer of power. However, with the Democratic victory, the rally became a celebration. Some speakers noted that they had to make edits to their speeches — specifically changing their tone from uncertainty to cautious optimism — but encouraged attendees to keep fighting for the progressive movement and marginalized communities.

Biden’s projected win came at the end of an extremely close race. With a projected win in Pennsylvania, Biden exceeded the needed 270 electoral votes to win the presidency.

Nia Nunn, associate professor for the Department of Education at Ithaca College, spoke at the rally. She said that despite Biden being elected, there is still work to be done. Nunn said that Biden will need to clean up many messes left from the previous presidency but also will need to create transformative and innovative methods of democracy. As seen with the grassroots organization “Settle for Biden,” created by supporters of former Democratic presidential candidates Elizabeth Warren and Bernie Sanders, it is no secret that Biden was not the first choice for many who voted for him.

Nunn said that it is important to continue the momentum of advocating for structural change following voting Biden into office.

“It’s heavy,” Nunn said. “It’s intense. I simultaneously think it’s critical that we remain vigilant, that we remain aware, that we remain conscious and that we don’t welcome any complacency at all. If anything, there’s even more intense work to be done.”

Sandra Steingraber, distinguished scholar in residence for the Department of Environmental Studies and Sciences, spoke about the environment with experience as the co-founder of New Yorkers Against Fracking and Concerned Health Professionals New York, which both helped win a fracking ban in New York state.

“The people who are hurt first and worst by the climate crisis, who are hurt most by the toxic exposures from oil and gas extraction, are not at the political table,” Steingraber said. “We cannot unfrack our nation without unsuppressing the vote.”

Maintaining power plants and fracking is more expensive than turning to clean energy, Steingraber said. She said the jobs in fracking are more dangerous. While fracking jobs in Pennsylvania were a hotly contested part of the campaign, Steingraber said she thinks that is not what kept people from voting for Biden. She said that fracking does not have the voting pull that Trump said it did during the campaign. 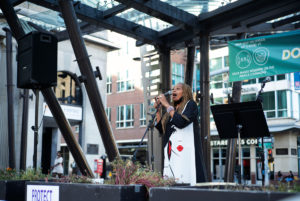 Steingraber said just 100 companies are responsible for 71% of the world’s industrial greenhouse emissions. In his campaign, Biden said he does not support an outright ban on fracking but favors a ban on new fracking on federal land. Acknowledging the existential threat of climate change, Biden created the Clean Energy Revolution climate plan with goals to achieve a 100% clean energy economy and net-zero emissions by 2050.

Students at the college have had mixed reactions to Biden’s projected win.

Junior Sebastian Chavez said that he is disappointed that both Biden and Trump are old, white men who have said and committed racist actions. Trump has a history of discriminatory and racist speech against Black people, Latinos, Muslims, Jewish people, immigrants and women. Biden was one of the primary senators who worked to pass the Violent Crime Control and Law Enforcement Act of 1994. This law contributed to mass incarceration and disproportionately affected people of color, specifically Black men.

“I actually was not going to vote,” Chavez said. “I actually voted on Nov. 3. I checked if I was registered in Ithaca. If I was, I was going to do it. … Being a POC [person of color] and being a Latinx man, it kind of disappointed me that I had to pick the lesser of two evils. … These old, white men won’t change any barriers or any stereotypes.”

When Harris was attorney general for the state of California, some of the legislation she put in place disproportionately affected Black people.

Senior Connor Shea, president of the Student Governance Council, who has been working on IC Votes, an initiative to encourage students at the college to vote, said that he looks forward to seeing what Biden and Harris’ administration will bring.

“With the announcement of President-elect Joe Biden and Vice President-elect Kamala Harris, we now must shift our focus and look to what’s next,” he said via email. “It is crucial that we hold this administration accountable, continue to organize and collaborate and stay engaged. There will be elections before 2024, and I ask that we all think about those local and statewide elections that impact our communities and continue to vote and think critically.”

Senior Agnes Scotti said that she was very impressed by the voter turnout for this election. Approximately 159.8 million people voted in the 2020 presidential election, a number that is a record high. The youth vote increased compared to the 2016 election as well, with 49–51% of 18-to-29-year–olds voting in the election, a percentage that could increase to up to 56% once all votes are counted, according to Inside Higher Ed.

“I hope that it gives our country a little bit of hope, a bit of sunshine,” Scotti said. “I know that I’m going to wake up tomorrow and get back to work because we know that Biden and Kamala Harris are great, but we have to push them to be better. We need to push them to speak for everyone — Black voices, brown voices, trans voices. The work doesn’t stop today.”

She said that the United States is facing many issues, including a global pandemic and a widespread civil rights movement, which will not go away once Biden is inaugurated.

“We need to change a bunch of the systems in our country,” she said. “We need to not be depending on capitalism. There’s a bunch of things that we need to fix, but Biden is not the solution for them. He’s just a better choice.”

Ithaca community members echoed these sentiments in an informal postelection rally, called “Beyond the Ballot Box,” on Nov. 4 on The Commons.

Speakers from Ithaca Tenants Union, Ithaca Pantheras, the Poor People’s Campaign and the Party for Socialism and Liberation spoke about goals they believe others should have, no matter who wins the current election. Approximately 100 people attended.

A member of the Tompkins Anti-Racist Coalition who referred to himself as G spoke about how racism, no matter who wins the election, is still an issue. 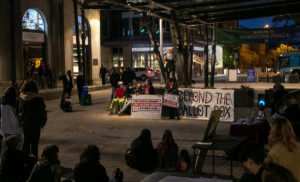 Ithaca residents gathered Nov. 4 on the Ithaca Commons for the “Beyond the Ballot Box” rally. Ash Bailot/The Ithacan

Shannon Gleeson, associate professor of Labor Relations, Law and History at Cornell University and organizer for the Tompkins County Immigrant Rights Coalition, called the human rights movement a bipartisan project and urged others to volunteer and become involved with local organizations dedicated to the cause.

“I want to emphasize that securing our basic rights is not enough,” Gleeson said. “Of course, we can’t take that for granted. … The dignity of immigrant lives is a foil for us to reflect on the dispossession of native peoples and the enduring anti-Blackness of our country’s history.”

Scotti said that she would like to see this progressive movement continue through future elections.

“There will be a Republican challenger in four years,” she said. “Trump’s not going away. The people who support him, they didn’t go away either. … They exist, and they hold his values and they’re very upset right now, and they don’t believe that this is right. Their voices deserve to be heard, but we have to push for a president for everyone.”

Even before the election, there have been allegations from conservatives of voter fraud with mail-in ballots. Many of the allegations have been false. The accusations, which have primarily been made by Trump and his allies, have continued into the days after the election.

Senior Michael Deviney, president of Ithaca College Republicans, said he believes there has been voter fraud with the increased number of mail-in ballots for the election.

“I believe there is more voter fraud in this election than in any other,” he said.

“If that litigation does settle and Joe Biden is the president, you won’t see Republicans looting and rioting in the streets,” he said. “If nothing changes, it just lets Republicans know to work harder and uphold our values even more.”

Ithaca College Democrats released a statement Nov. 8 congratulating Biden and Harris for their win on its Instagram.

“Waking up this morning, we can exhale knowing that America is on the right track to a brighter, more peaceful future for all of its citizens and to truly heal from these last four years,” the statement said. “But the hard work is yet to come. Though we endorsed Biden and Harris, and still do, we will continue to hold them accountable in the days, weeks, months and years ahead.”

Deviney said that he is satisfied with the congressional elections so far. As of Nov. 7, Democrats and Republicans tied in the Senate. Democrats are leading by 19 in the House of Representatives, but Republicans flipped eight seats.

U.S. Rep. Tom Reed (R-NY) was reelected as representative for New York state’s 23rd Congressional District. Deviney said that he had been volunteering for Reed’s campaign since early this year.

“I’m really happy for him and glad that all the hard work these past few months really paid off, even with the COVID pandemic occurring,” Deviney said.

In other Tompkins County elections, Democrat Anna Kelles is projected to win the 125th District New York State Assembly seat with 60.44% of the vote over Republican Matthew McIntyre.

The Tompkins County Board of Elections began counting mail-in ballots Nov. 10. Approximately 11,000 absentee ballots need to be counted, according to The Ithaca Voice.

Chavez said that he is excited about the increase in diversity in elections, both local and state, across the United States. In Delaware, Democrat Sarah McBride became the first transgender state senator. Democrat Mauree Turner became the first nonbinary state legislator, the first Muslim legislator in Oklahoma and the first Black person to represent the state’s 88th District. Democrats Zohran Mamdani and Jenifer Rajkumar became the first South–Asian people elected to the New York State Assembly.

Democrat Cori Bush is the first Black woman to be elected to the House of Representatives in Missouri, and Democrats Mondaire Jones and Ritchie Torres became the first gay Black members of Congress.

“If we look at local politics, we are coming up,” Chavez said. “There’s a lot of diverse candidates who were just elected — transgender, POC. It’s amazing to see POC getting involved and actually getting elected at local levels, which will soon rise up to higher levels.”