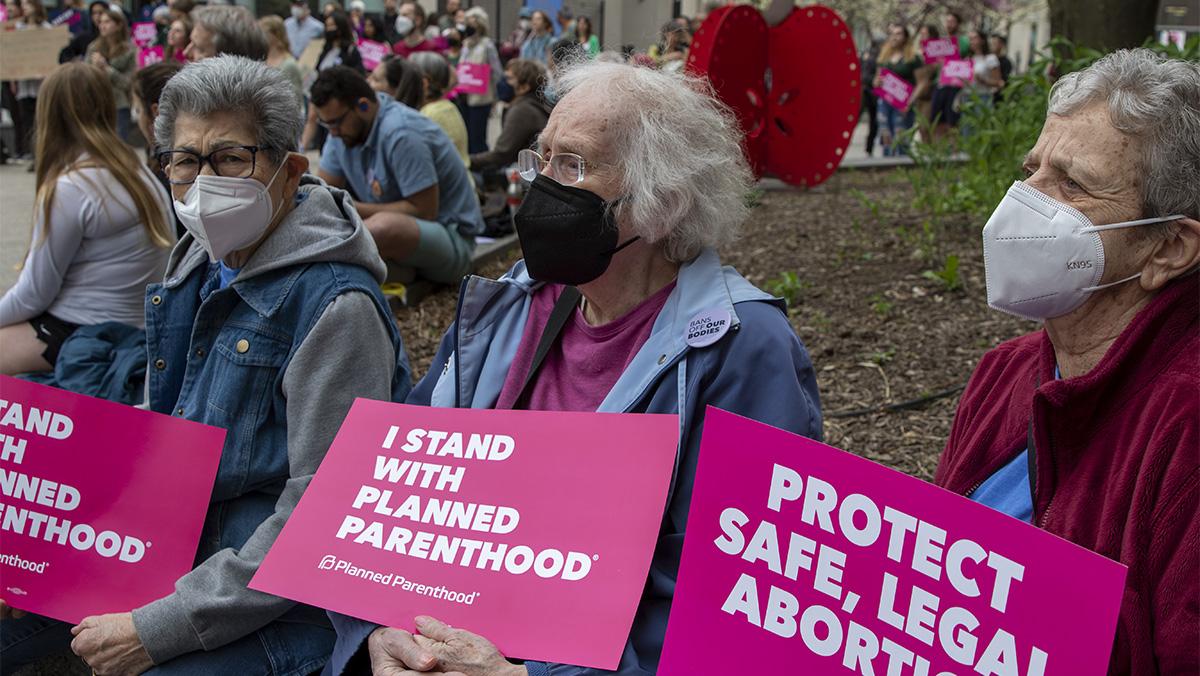 Eva Salzman/The Ithacan
About 100 members of the Ithaca community gathered at the Bernie Milton Pavilion on The Commons to rally in support of the right to an abortion. Protestors held signs that read, “Abortion is a human right,” “Women should have more bodily autonomy than a corpse,” “I stand with Planned Parenthood,” “Safe abortions save lives” and “Not your body, not your life, not your business.”
By Alexis Manore, Elijah de Castro — Editor in Chief, News Editor
Published: May 5, 2022

Despite long-standing legal precedent and public opinion, the United States Supreme Court intends to overturn Roe v. Wade, a landmark piece of civil rights legislation that made access to abortion a constitutional right. On May 3, the Ithaca community gathered in protest.

According to an initial majority opinion draft leaked to Politico, the Supreme Court is planning to overturn Roe v. Wade and Planned Parenthood v. Casey in the coming months, returning abortion legislation to the jurisdiction of individual states. Chief Justice John Roberts verified the authenticity of the draft opinion May 3. The draft decision was authored by Associate Justice Samuel Alito, a conservative judge whom former President George H. W. Bush nominated to the court. Justices Clarence Thomas, Amy Coney Barrett, Neil Gorsuch and Brett Kavanaugh have joined Alito in the decision, according to Politico.

“We hold that Roe and Casey must be overruled,” Alito said in the draft decision. “The Constitution makes no such reference to abortion, and no such right is implicitly protected by any constitutional provision.”

Roberts has yet to vote, but no matter how he votes, the conservative justices hold the majority on the court and on the draft decision. However, Roberts did note that because it is a draft, it could change before the final ruling, which is set to be released in June.

Since Ithaca College is located in New York — which has codified the protections in Roe v. Wade into law — the campus community will likely still have access to safe and legal abortion. However, at least 23 states including Texas, Mississippi, Georgia, Alabama, South Carolina, North Carolina, Utah, Idaho and more, have laws banning abortion that preceded Roe v. Wade already on the books, or have trigger laws that will go into effect once Roe v. Wade is overturned.

The leak ignited both outrage and celebration from thousands of people across the nation. Many gathered to protest the draft decision and to show their support for Roe v. Wade, including in Ithaca.

About 100 members of the Ithaca community gathered at the Bernie Milton Pavilion on The Commons to rally in support of the right to an abortion. Protestors held signs that read, “Abortion is a human right,” “Women should have more bodily autonomy than a corpse,” “I stand with Planned Parenthood,” “Safe abortions save lives” and “Not your body, not your life, not your business.”

Colin Benedict, an organizer for Planned Parenthood of Greater New York, said at the protest that the government has no business interfering with people’s personal healthcare decisions.

“Abortion bans are the perpetuation of racism, sexism and economic injustice in a country that has a long history of stripping people of their own autonomy,” Benedict said. “New York must remain an access state for abortion.”

Leslie Danks Burke, a local political organizer and candidate for the 53rd New York State Senate district, said she has fought for abortion rights for so long that she could see the overturning of Roe v. Wade coming, it was no less a punch to the gut.

“Abortion does not end when it’s illegal,” Danks Burke said. “What changes is how many more girls, women, trans women, will die from it. … Make no mistake about it, this is a crushing blow.”

Reporting by The New York Times shows that if Roe v. Wade were to be overturned, the number of abortions that occur in the United States would only fall by 14%. Those seeking abortions in states where it is illegal would then have to turn to the black market or perform an abortion themself, which is unsafe and risks creating health issues.

Tiffany Kumar, a sophomore at Cornell University and candidate for the alderperson of Ithaca’s Fourth Ward, said those most heavily impacted by Roe v. Wade’s overturning will be marginalized communities.

“How is this democracy?” Kumar asked. “How is it pro-life? … I, as well as many people here, possess similar privileges, but it is so moving to see us all out here today, fighting for those who cannot, lending a voice to the voiceless. This is what democracy looks like.”

Senior Adele Gulino is the social media manager for IC Planned Parenthood Generation Action, a group on campus that advocates for reproductive freedom. Gulino said that while she was disappointed to hear about the decision, she and other members of the group expected it.

“This is something that we [the club] has been talking about for a long time,” Gulino said. “It came as a surprise because I think all of us were anticipating what’s going to happen in the summer. It came so quickly.”

Gulino said she hopes members of the campus community from the Northeast do not forget about Southern states, where women face greater poverty rates than other areas of the country.

Junior Claire Thompson is from Houston, Texas where abortion has become almost entirely banned. Thompson said that in states in the south, there is a different perspective on abortion that is influenced by religion.

“I was raised in the Southern Baptist Church,” Thompson said. “It does sound terrible to say that people are killing babies. If that was what was happening, I’m sure that we should put an end to it. But, you know, that’s just not really the case.”

In a statement provided to The Ithacan, Ithaca College Republicans endorsed the position that Alito took in the draft decision.

“This reconsideration is long overdue, and if overturned, the decision would be left for each state to decide,” the statement said. “We hope these changes will result in the conservation of countless innocent human lives otherwise scheduled for slaughter.”

The organization also condemned Politico’s decision to leak the documents and labeled it as an act of intimidation in an attempt to force the justices into changing their position.

“We hope the Supreme Court will take appropriate disciplinary actions against the leaker,” the statement said. “Life is the single most precious gift given to us by our Creator, and every institution of government has a sacred duty to protect it.”

Kasia Bartoszynska, assistant professor in the Department of Literatures in English, teaches women and gender studies classes. Bartoszynska said the issue is made worse by the fact that the United States is the only wealthy nation to not mandate paid maternity leave.

Bartoszynska also said the draft decision is a failure of the Democratic party. In both former President Barack Obama and President Joe Biden’s campaigns, the politicians promised to codify Roe v. Wade into law. Neither attempted to fulfill their promise.

“We’ve been constantly told that we have to vote for Democrats because what Republicans do will be worse,” Bartoszynska said. “But it is also like, ‘what are Democrats even going to try to do when they’re in power?’”

Thompson said that while she is hopeful that young people will be educated on the issue, she believes the discussion around abortion rights should already be settled.