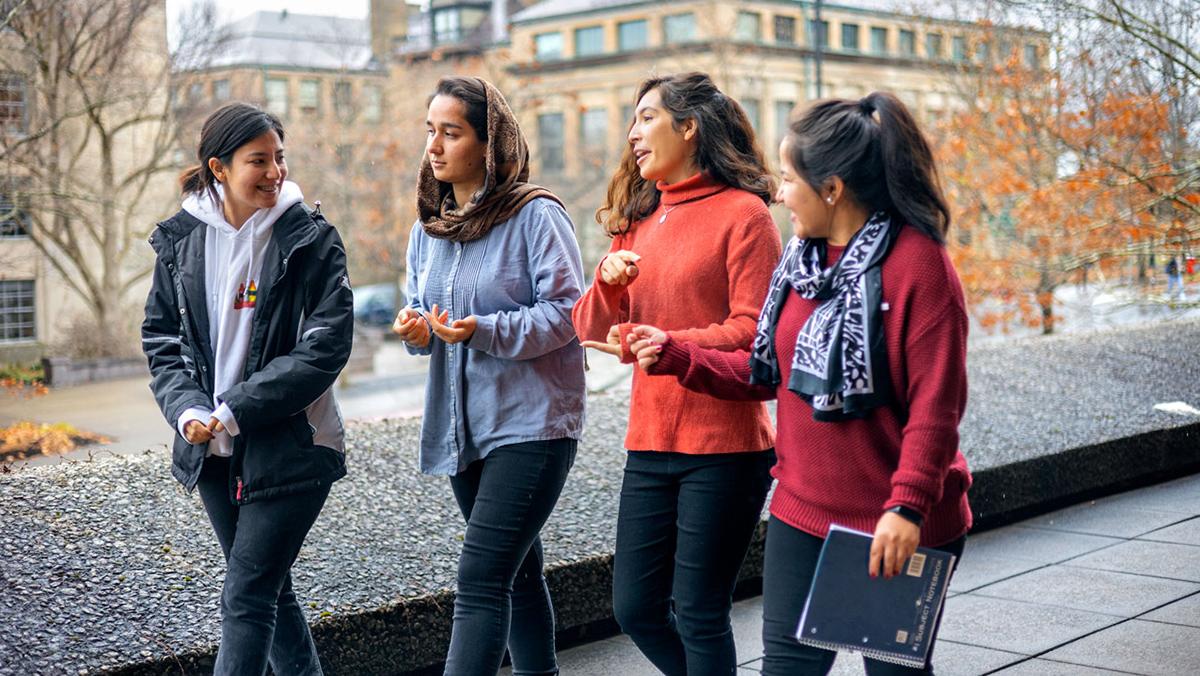 Diana Ayubi arrived in Ithaca months after escaping Afghanistan as the Taliban gained control of the country. Ayubi expected to end up in Bangladesh, but after multiple diversions was placed in the United States. She is a part of nine Afghan refugees who are attending Cornell University for Spring 2022 after arriving in Ithaca in late 2021. Ithaca College housed some of the students last semester, due to lack of space at Cornell.

After the United States ended its 20-year occupation of Afghanistan in August 2021, the Taliban took control and the country plunged into economic despair. Additionally, President Joe Biden’s administration froze billions of dollars in humanitarian aid and imposed crushing sanctions on the country, resulting in 23 million Afghans facing extreme levels of hunger, according to the United Nations. There are 2.6 million registered Afghan refugees spread throughout the world, according to The UN Refugee Agency.

Ayubi said she planned to flee to Bangladesh, but was redirected to Saudi Arabia — the first of many redirections in her journey — where she was informed she would not be able to enter Bangladesh.

“The system was totally changed,” Ayubi said. “They said, ‘We have no idea where your destination is.’”

After 36 hours in Saudi Arabia, Ayubi was told by the U.S. military that it was moving her, and other refugees traveling with Ayubi, out of the country.

“There was no information about the destination,” Ayubi said. “When the plane arrived they said ‘Welcome to Spain. You’re in Spain.’”

Days of waiting passed and Ayubi ended up in the U.S. at a military base in Wisconsin. After three months, Ayubi was placed in New York and informed she would be studying at Cornell University where she enrolled as a psychology major.

Ayubi and her classmates were assisted in their escape by the Asian University for Women (AUW), an independent regional institution that is located in Bangladesh that focuses on women’s education and leadership, according to their webpage. The school opened in 2008 with a total of 130 young women from many countries like Bangladesh, Cambodia, India, Nepal, Pakistan and Sri Lanka.

Due to the COVID-19 pandemic, AUW was closed for in-person classes for almost two years and sent their students back to their home countries, including about 150 students who were from Afghanistan.

Ayubi was in her final year of schooling at the Asian University for Women where she studied public health. Ayubi said public health was not what she really wanted to study, but AUW does not offer a psychology degree. Cornell’s course offerings have allowed Ayubi to switch majors.

“When I came to Cornell I changed my major,” Ayubi said. “I want to be a therapist and I want to have my own clinic. I can achieve my dream of what I was thinking when I was in high school.”

Tim DeVoogd, a psychology professor at Cornell has been on the AUW Board of Trustees for about two years. After hearing that the Afghan students were displaced, DeVoogd notified Cornell that the woman would be looking for places to stay in the U.S..

“I think Cornell specifically and Ithaca, in general, have been amazingly welcoming,” DeVoogd said. “… There’s been a whole lot of people in Ithaca who have volunteered meals or potential homestays if they were needed.”

Ithaca College housed some of the refugees, including Ayubi. She said the staff was helpful and kind.

“It was out of my expectations,”Ayubi said. “Even though I’m in Cornell it’s still sometimes I really miss Ithaca College.

Marsha Dawson, director of the Office of Residential Life and the Office of Student Conduct and Community Standards, provided leadership in the college’s role of housing the woman. Dawson did not respond to requests for comment.

Ithaca Welcomes Refugees (IWR), a volunteer-based organization that was founded in 2015 in response to the Syrian Refugee Crisis, worked with the refugees to help them sign–up for necessities like public health benefits.

Casey Verderosa, executive director of IWR, said the organization also works to get the women what they need through fundraisers in the community.

“We have a really, really great network in the community and this community is extremely supportive of refugees,” Verderosa said. “It’s wonderful how the community, including the major educational institutions and just regular people, really gathered around to support this group of women. I think it is really affirming of the goodness of the human spirit.”

Cornell senior Willow Martin is president of Women’s Higher Education Now (WHEN), a student organization that explores the intersectionality of issues like gender equality, sustainable development and equitable education.

Martin said that once WHEN was alerted that the crisis in Afghanistan was leading to the students being evacuated to the U.S. they wanted to find ways to ensure that the women would have the resources they need while staying here.

DeVoogd is the club advisor of WHEN and has helped affiliate the organization with AUW.

“They had left with literally a carry-on. They didn’t have clothes, they didn’t have books,” DeVoogd said. “[WHEN] raised $550 each for these nine students. For winter coats, or fixing up their dorm rooms, just so things could be nice.”

The group raised $4,950 from Oct. 25 until the end of the fall semester which it donated to the nine refugees as a way to help provide financial support to the students. WHEN held a clothing drive in conjunction with the fundraiser where Martin said they received lots of winter gear.

“I think any community would be made stronger by having members as brilliant, strong, and kind as these young women,” Martin said. “In addition to being remarkable students, they are also community-minded individuals. While they were living at [Fort] McCoy Airforce Base in Wisconsin, they spent much of their time teaching other Afghan refugees English; they worked with a wide spectrum of age groups, ranging from little kids to fully–grown adults. It’s an honor and a privilege to welcome people like them into the Ithaca community.”

Ayubi said that her time at Cornell has been busy with meetings and meeting new people and  that everyone has been welcoming and supportive.

“Here I’m not having any relatives I know or family,” Ayubi said. “So on my side is Cornell right now and those people that are around me.”