Ithaca is smart: what makes Ithaca the “Smartest city in America” 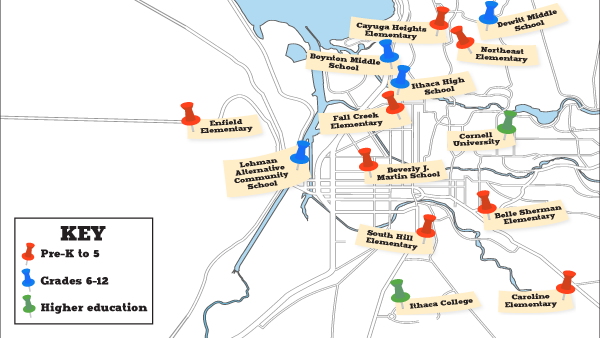 Over the years, national polls have dubbed Ithaca, N.Y., the best college town, the most enlightened city and, more recently, the smartest city in the U.S., making way for yet another “Ithaca is Gorges” variation.

Lumosity, an online brain-training platform designed by neuroscientists, named Ithaca the “Smartest City in the United States” in June after analyzing the results of online cognitive exercises taken by more than 1,500 respondents with IP addresses in Ithaca.

Daniel Sternberg, data scientist on the research and development team at Lumosity, said the term “smartest” was defined by cognitive performance in five areas: speed, memory, attention, flexibility and problem-solving.

“What makes these rankings different from other rankings of smartest cities … is that [while other groups] might look at things like employment rate, proportion of people working in technological sectors, the number of libraries per capita … we are actually looking at tasks that can measure cognitive performance within a sample of people,” he said.

Sternberg said while college towns scored higher than others overall, Ithaca’s geographic location may have given it an advantage.

“Ithaca is actually its own metropolitan area, whereas Cambridge, Massachusetts, for example, is part of the Boston metropolitan area,” Sternberg said. “So Ithaca also pops up a little higher in part because it is this geographically isolated area with lots of education to support [it].”

Ithaca Mayor Svante Myrick said these rankings did not surprise him.

“I thought it was funny, but not surprising,” Myrick said. “Knowing Ithaca now as well as I do, I know there are some incredibly brilliant people here. I also know that there are also a lot of people here who have time on their hands to go on Lumosity.com and play these brain-improvement games.”

Home to more than 28,000 undergraduate and graduate students from Ithaca College and Cornell University, the city’s academic culture dates back to the 19th century.

Sean Eversley Bradwell, assistant professor at Ithaca College’s Center for the Study of Culture, Race and Ethnicity, received his PhD in policy analysis and management from Cornell University. Bradwell, who has also served a three-year term on the Ithaca City School District Board of Education, said Ithaca was at the forefront of education in the 1820s.

“Fifty years before New York State mandates public education, Ithaca already has a high school called the Ithaca Academy, which began in 1823,” Bradwell said. “So there has been a long-standing tradition of academics and learning in this community.”

The academy was in existence until 1874, when it became what it is today — Ithaca High School.

Luvelle Brown, superintendent of the Ithaca City School District, said the 12 schools in the district embody what he said constitutes being “smart.”

“The definition of smart is creation, collaboration, problem-solving, critical thinking, to create new knowledge,” Brown said. “Our vision statement and our mission is to do just that. All that we do has critical thinking embedded in it, whether it is policy development … or relationship building. All that we do has thinking at its core to create and help young people be able to build new knowledge.”

“We have redesigned some learning spaces … that promote critical thinking, collaboration and problem-solving for young people,” he said. “We have young people in physical spaces that allow them to work, to write on desks, write on walls.”

Bradwell said Ithaca’s history of racial ups and downs is another aspect that makes the city special. Bradwell said the city’s scenic beauty may also help set it apart from others.

“It is supported by just the physical beauty and nature, that almost inspire all wonder and reflection,” he said. “It seems to be a community where people want to come and think.”

In the New York Times article “Colleges Help Ithaca Thrive in a Region of Struggles,” published last month, Myrick said the city’s success could also be attributed to the fact that its universities have partnered with private industries.

According to the U.S. Census Bureau, 62 percent of people in Ithaca have a bachelor’s degree or higher, compared with 32 percent in New York state and a 28 percent national average.

However, Bradwell said there are two types of educated people in the city.

“There is a significantly higher number of ‘formally’ educated people [in Ithaca], but as I am sure we know, along with that formally educated population also comes a number of people who are informally trained — artists, musicians, actors, etc. — who may not have academic credentials but are no doubt ‘smart’ in their own right,” Bradwell said.

College and grade-school students in Ithaca have often come to the spotlight, but Bradwell said Ithaca natives also contribute to the city’s reputation of being “smart.”

“I do some work in the community, and I know folks who are multi-generational Ithacans — people who have been here for three or four generations,” he said. “I think the same thing applies to all folks who live in this community.”

More bright students and a bright future seem to be on the horizon for Ithaca. Speaking to the media in Albany last month, Myrick said the city will need to build 2,000 to 3,000 housing units in the city to accommodate its expected population growth.

Bradwell said he expects the city to see “brain gain” in the coming years.

“If you read the New York Times article [on Ithaca], you will see that we seem to be the only county in upstate New York that experienced economic growth, as opposed to economic recession,” Bradwell said. “And part of that is because of the fact that education remains a viable industry. When three of your top four employers are educational institutions, you continue to attract a particular group of folks who come to live, work and learn in this community. I only see this increasing in the years ahead.”