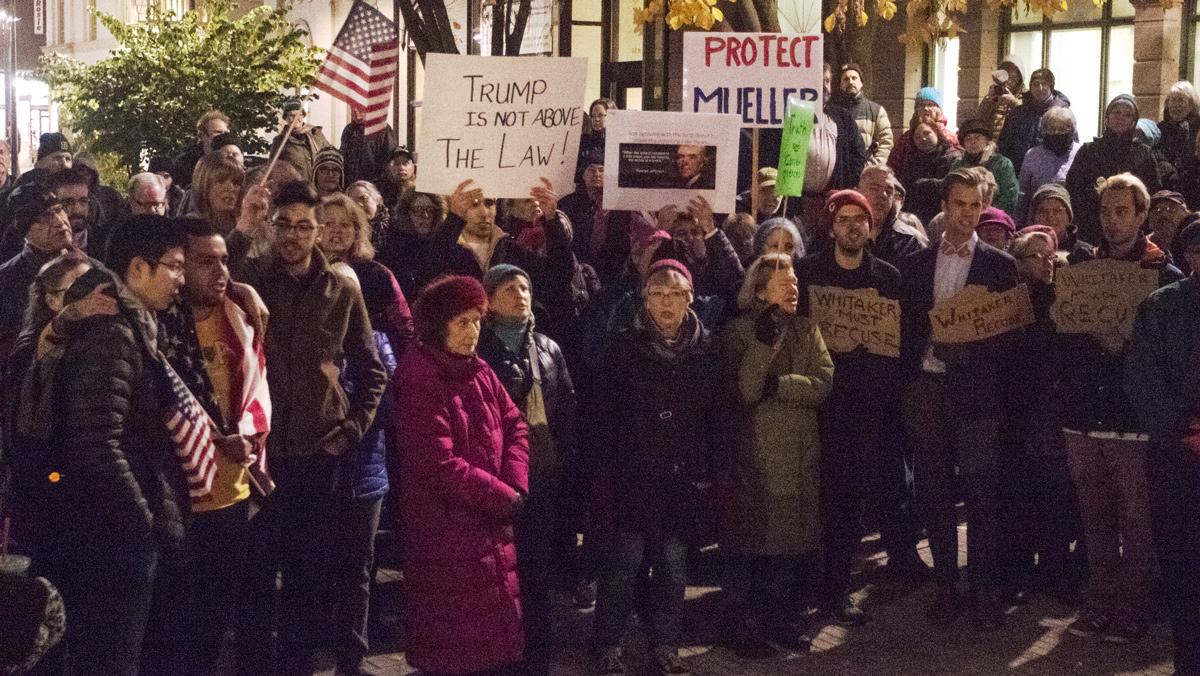 Maxine Hansford/The Ithacan
The evening event at the Bernie Milton Pavilion was one of over 200 rapid response protests happening nationwide. The series of protests is part of an ongoing national campaign called Nobody is Above the Law.
By Ben Kaplan — Senior Writer
Published: November 9, 2018

A large crowd of locals Ithacans gathered Nov. 8 on The Commons as part of a nationwide protest organized by MoveOn.org in response to the recent resignation of former Attorney General Jeff Sessions.

The evening event at the Bernie Milton Pavilion was one of over 200 rapid response protests happening nationwide. The series of protests is part of an ongoing national campaign called Nobody is Above the Law. The campaign called for protesters across the country to mobilize at 5 p.m. after Sessions resigned from his position Nov. 7 at the request of President Donald Trump. Following his resignation, President Trump named Sessions’ former Chief of Staff Matthew Whitaker as acting attorney general. The appointment has been controversial due to Whitaker’s past criticisms of special counsel Robert Mueller’s investigation of Trump-Russia relations.

The event drew around 100 to 150 people at its peak. Patricia Heckart, a Trumansburg resident and host of the Ithaca protest, said the event’s purpose was to show the strength of the people’s voice. Common themes for the night included unity and faith. 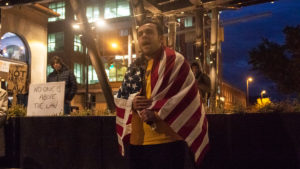 Andres Loret de Mola, a Cornell University student, tells the story of how he is a second generation immigrant and how he would be personally affected by the removal of birthright citizenship at a protest on The Commons on Nov. 8.

“Around the midterms, it was so obvious that this was going to happen,” Heckart said. “We have to fight for the fact that Whitaker does not have the legal right to be a part of these investigations.”

According to MoveOn’s event page, protests were planned to be initiated if any of the following events occurred: the firing of Mueller, pardons of any key witnesses in the investigations by Trump, the replacement of Mueller’s supervisor Rod Rosenstein or any significant attempts by the Trump Administration to block the public from obtaining information about the investigations. According to the page, Sessions’ resignation and subsequent replacement with Whitaker will directly undermine Mueller’s ongoing investigations and requires immediate action.

As the crowd huddled close for warmth, students, residents and self-proclaimed “extreme Ithaca liberals” stood up and took the opportunity to voice their concerns, share poetry and sing together. Though the protest was called to action specifically because of Sessions’ resignation, speakers touched on a variety of topics. Some called on Trump to release his tax returns while others reinforced the importance of standing in solidarity with minority communities.

Many attendees were drawn to the event to show support for their neighbors. Carol Chock, an Ithaca resident who served as a member of the county legislator for nearly a decade, said she believed the only way to stop abuses of power is to call the abusers out when they are recognized, preferably as a group.

“I’ve been in government, and I’ve been an activist, and right now I think we need both,” she said. “Only people coming to these events are going to prevent this overindulgence we have been seeing.”

Other speakers told stories of immigrant relatives and being raised to value the qualities that make people different. Andres Loret de Mola, a Cornell University student adorned with a United States Flag as a cape, recounted his own experiences as a second generation immigrant and how he would be personally affected by the removal of birthright citizenship. In a video published by news organization Axios on Oct. 30, Trump said that he may repeal the amendment that allows undocumented immigrants’ children to gain citizenship if they are born on American soil. The crowd used call and response to amplify speeches, as there were no microphones present.

Though the event only lasted an hour, attendees found it cathartic to be able to actively participate in the process. Ithaca resident Deborah O’Connor said she attended because she still believed the rule of law would see the country through, but she felt it was necessary to emphasize it to others.

“We’re a nation of law,” she said. “And if we stop recognizing that, our democracy disappears.”