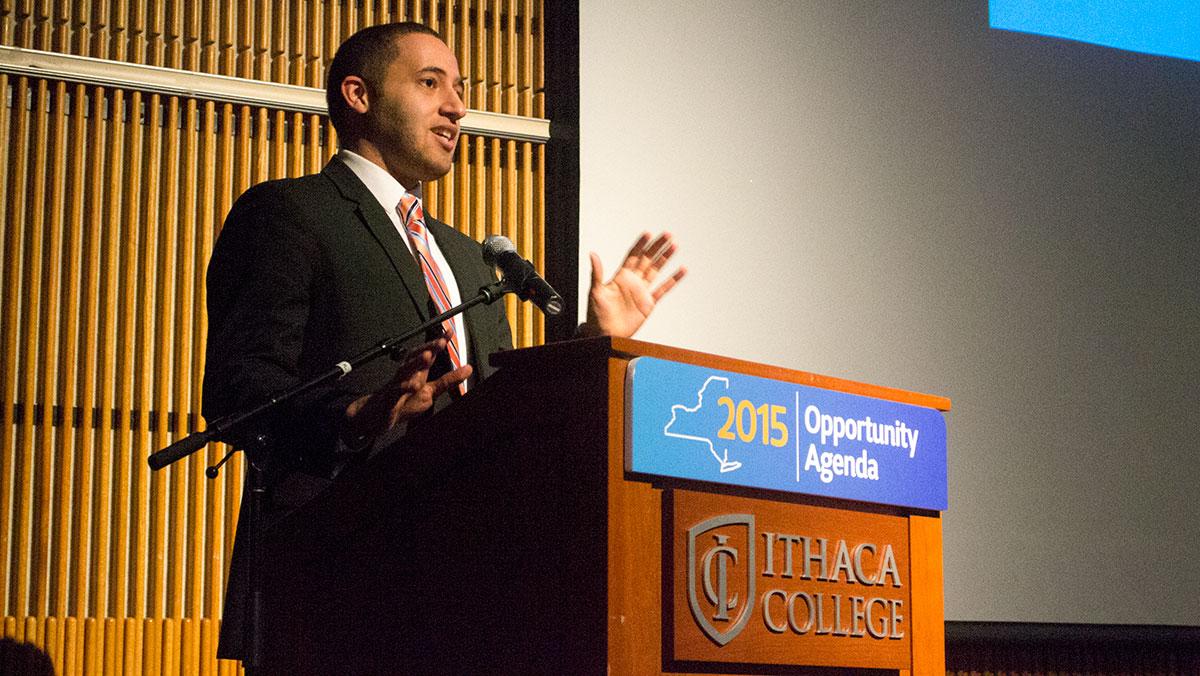 Cuomo will take a multifaceted approach to policy in 2015, spending the first year of his second term focusing on economic opportunity, education reform, public safety and ethics reform.

Corinda Crossdale, a member of the Cuomo’s cabinet and director of the New York State Office for the Aging, visited Ithaca College on Feb. 5 to outline the four key points of the governor’s 2015 Opportunity Agenda. The presentation, part of a tour of colleges in upstate New York, was open to the public and was meant to explain the governor’s fiscal plans and policy proposals.

Crossdale presented to an audience of a little over 20 people, including several students as well as Ithaca College President Tom Rochon. Crossdale was introduced by Ithaca Mayor Svante Myrick, who praised Cuomo’s plan for New York in a short opening address.

“It is such a forward-looking and progressive agenda that the governor has laid out,” Myrick said. “It’s forward looking in that it recognizes not just where we’ve been and where we are, but where we need to take New York state and upstate New York.”

“New York should be in the forefront of protecting students from sexual assault, and we believe that these changes will do just that,” Crossdale said.

“We have to ensure those strategies that we’ve put in place over the past four years that have proven effective continue on,” she said of the governor’s policies of fiscal constraint and tax relief. “In order to do that, we have to maintain that lower level of spending in government. And because we can spend less, we can tax less.”

Crossdale said Cuomo’s economic plan also proposes increased investment in New York’s infrastructure. In addition, she said the governor is proposing a plan that would give every New Yorker access to high-speed broadband Internet by 2018. The proposal would commit $500 million to expanding broadband services around the state.

She said the economic plan also includes steps to fight poverty in the state and address the wage gap by increasing the minimum wage. Cuomo announced Jan. 18 he will be seeking to raise minimum wage to $10.50 statewide and $11.50 an hour in New York City by the end of 2016.

However, sophomore Timothy Conners, who attended the presentation, said he believes increasing access to charter schools is the wrong approach to education. He said more attention needs to be paid to improving public schools.

“Why aren’t we putting more into public schools and spending instead of cutting if we know that we need to improve things there?” he said.

The final point Crossdale addressed was improving ethics in New York state politics. She said the governor believes restoring the public’s trust in state government is important. This comes on the heels of the recent scandal including former Speaker of the New York State Assembly Sheldon Silver’s resignation after his arrest on federal corruption charges earlier this month.

Crossdale said Cuomo is proposing a plan exposing legislators to pension forfeiture if they commit a felony. The plan would also reduce lawmakers per diem to cover only necessary costs. Crossdale said the governor will refuse to accept a budget without his ethics reforms adopted.