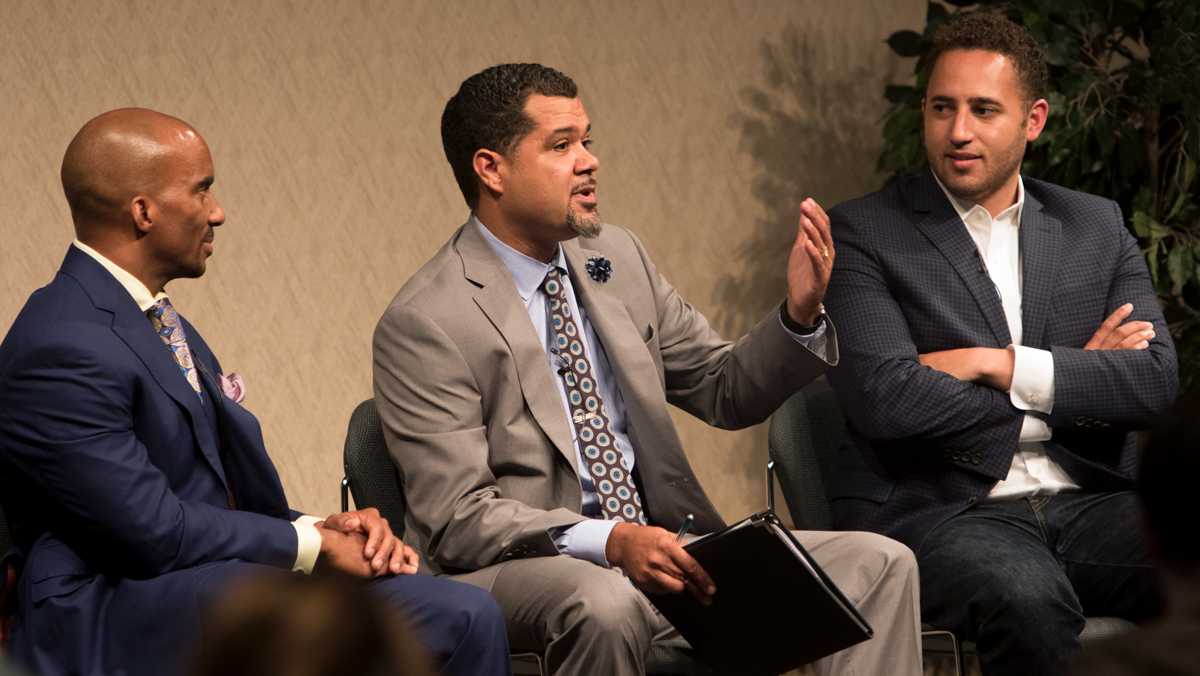 As Ithaca Mayor Svante Myrick watched news coverage of white supremacist violence in Charlottesville, Virginia, this summer, he was struck by the similarities the college town shared with Ithaca.

“If I were to put you in downtown Charlottesville right now, you might think you were in Ithaca,” Myrick said.

Myrick participated in a Sept 5. discussion with Luvelle Brown, superintendent of the Ithaca City School District, which was facilitated by Sean Eversley Bradwell, director of programs and outreach in the Center for the Study of Culture, Race, and Ethnicity. About 200 people attended the event, held in the Emerson Suites.

On Aug. 12, Neo-Nazis, members of the Ku Klux Klan and other white nationalists, descended upon Charlottesville. Counterprotestor Heather Heyer was killed by a Nazi supporter who drove a car into a crowd of demonstrators.

Brown, a native of Charlottesville, opened the conversation by talking about how he experienced racism growing up in the city. He said he remembered that no one wanted to talk to him in his first high school advanced placement class, presumably because he was black.

“They probably didn’t want me to succeed,” he said.

He said that in the weeks following the rally, he received numerous phone calls from friends and family who also grew up in Charlottesville. He said he heard voices filled with disappointment, fear and anger through the phone.

Eversley Bradwell asked Myrick why he thinks it is important to have conversations about racism. Myrick said he believes Ithaca could be the location of a similar event, which is why talking about these issues is so important.

Myrick and Eversley Bradwell also spoke about how people in the Ithaca community can combat hate. Eversley Bradwell encouraged listeners to not just actively disengage in racist, sexist or homophobic thoughts and actions, but to also stop those thoughts and actions when they encounter them. Myrick then recalled the day he learned about the KKK as an elementary student. After the class discussion, a group of his classmates hugged him and told him he was accepted as a student of color.

“It made me feel supported enough to learn and focus on my math homework rather than looking around the room thinking, ‘Who has my back, and who doesn’t have my back?’” Myrick said.

Throughout the conversation, people hummed tones of approval and nodded their heads in engagement.

Belisa Gonzalez, associate professor and director of the Center for the Study of Culture, Race, and Ethnicity, brought her class, Practicum in Social Change: Urban Mentorship Initiative, to the event. She said she wanted to bring her students because part of their participation in the class includes teaching at a middle school in Brooklyn, New York. She said she felt it was important to introduce her students to the types of conversations they are expected to have with the students in Brooklyn.

“Often times we try and skirt around these conversations, especially with young people and children,” Gonzalez said.

Freshman Yetunde Smalls said the part of the discussion that revolved around promoting kindness and love was important to her.

“What really resonated with me is the message of leading with love,” Small said. “I think a lot of times as a society, we think about having the power to be actively against racism, but never about how to be actively kind to someone.”

Myrick said he was glad a conversation about what happened in Charlottesville was able to occur at the college in order to define for students how to react to the event.

“I think that I wanted to be here because our students just came back, and they were experiencing Charlottesville through the TV or translating it through a phone,” Myrick said. “We wanted to send a message about what it means to come to school in Tompkins County or the Town of Ithaca and how much we care about our students.”