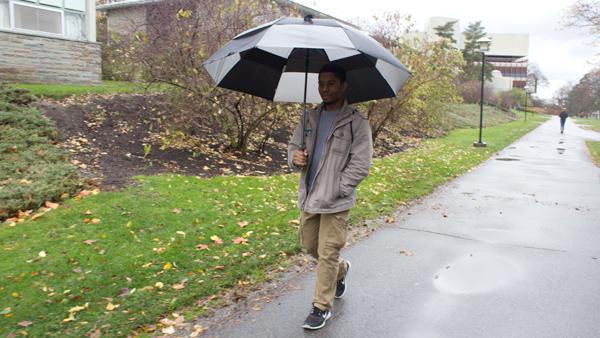 Superstorm Sandy moved through New York Monday and early Tuesday, but the Ithaca area experienced little effect from the storm.

On Tuesday morning the City of Ithaca reported little accumulation of rain and little chance of flooding in a press release. However, wind speeds in excess of 40 mph do still have the potential of toppling trees and downed power lines.

Ithaca College canceled all classes and activities after 5 p.m. and closed academic buildings at 8 p.m. Monday, but is open on Tuesday. There are no plans for cancellation on Wednesday.

New York State Electric & Gas reported six customers in Tompkins County are without power as of noon Tuesday.  A press release from NYSEG on Monday warned customers that power may be out for multiple days.

“We are prepared to respond to outages and we encourage our customers to be prepared to be without power as a result of this historic storm,” Mark Lynch, president of NYSEG, said in a release Monday. “The first phase of the service restoration process, damage assessment, will not begin until the storm passes, perhaps on Wednesday, so we ask that customers be prepared for a long duration event,” Lynch said.

Not all of the Ithaca College community was spared, however, as there are students studying in New York City this semester. Senior Emily Menez, who is interning at Saturday Night Live this semester, is living in Midtown where she said the power flickered on and off Monday night.

Menez said there isn’t much the college can do for the students, but the program director did contact everyone to check on their whereabouts.

“I’m just hanging out in my room and trying to stay calm,” Menez said. “It’s been pretty dreary all day and I’m just trying to make things less scary so I’ve been listening to Disney music and stuff. It’s definitely scary being out here alone.”

The American Red Cross is preparing for response and throughout the mid-Atlantic and Northeast, the Red Cross has organized disaster workers and has more than 100 emergency response vehicles on alert.

Barry Stein, executive director of the Tompkins County Chapter of the Red Cross, said in a press release that residents should have a plan in place.

“The Tompkins County Chapter is mobilizing volunteers, shelters, relief supplies and disaster vehicles to help,” Stein said in the release. “The best thing families can do is to get ready now by staying informed about Sandy’s progress, listening to the advice of local authorities, checking their emergency supplies and reviewing their household’s emergency plan.”

The Red Cross, Department of Emergency Response and National Weather Service will be updating as the storm approaches.

To report injuries or damage on campus, contact the Office of Public Safety at 911 from any campus phone or 274-3333 from a cell phone. Off campus students should call 911 to contact the local emergency services dispatcher.

Last update was at 1 p.m. Tuesday. Check back for more updates to this story.