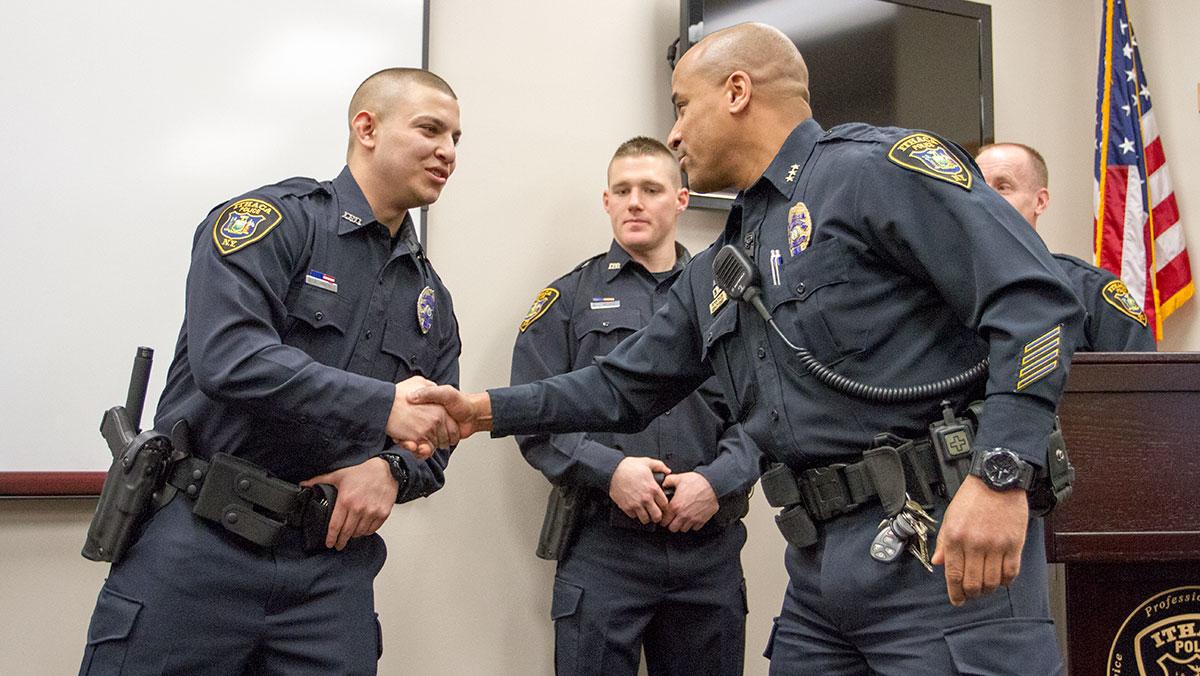 To improve relations with community members, the Ithaca Police Department has hired two officers and re-established a youth education program. However, members of the IPD said the hires are not enough to address understaffing in the department.

Officers Michael Meskill and Joseph Jiminez officially joined the force Feb. 9. Jamie Williamson, public information officer for the IPD, said the new officers were hired as part of Mayor Svante Myrick’s proposed 10-percent expansion of the police force. Both the 10 percent increase in staffing and increased community outreach programming were part of Myrick’s Plan For Excellence in Policing, which was released Aug. 25, 2014. The proposal was released following an Aug. 10 incident in which an IPD officer drew his weapon following a chase with several unarmed black teens. This incident coincided with national protests last fall regarding police brutality and violence following cases in Ferguson, Missouri, and Staten Island, New York.

Williamson said the addition of the two officers will benefit the department but noted staffing levels are still below where they once were or where the police department would like them to be. According to a commentary published in the Sept. 4, 2014, issue of The Ithacan by Sgt. John Joly, president of the Ithaca Police Benevolent Association, as a response to Myrick’s plan, the size of the police force has decreased by over 13 percent since 2011.

Sgt. Jeff Cole, vice president of the Ithaca PBA, said while the PBA welcomes the new officers, hiring two officers does not do enough to address the department’s depleted workforce.

Cole said members of the PBA believe Myrick’s elimination of funding for officer positions in recent budgets, such as Myrick casting the deciding “no” vote on whether to refund vacant positions, has limited the police force to being a reactive department.

“The consequences of cutting the department so deeply and inadequately funding officer positions within the department’s budget has been displayed by the declining police services,” Cole said. “Our skeletal work crew does not allow us to provide the level of service the Ithaca Community expects and deserves.”

The IPD also announced in a press release Jan. 29 the restoration of Ithaca Police Department Explorer Post 392. The Explorer program is intended to give youths in the Tompkins County area a better understanding of careers in law enforcement. The media release stated that IPD Police Explorers, between the ages of 14 and 20, would “learn relevant law enforcement skills, such as building searches, CPR, first aid, crime scene security and courtroom testimony.” Low staffing levels in previous years prevented the Explorer’s program from operating, though Police Chief John Barber reorganized personnel to re-establish it this year.

Williamson said the Explorer’s program demonstrates Barber’s commitment to transparency and desire to inform the public of  why the IPD operates the way it does.

In addition to the Explorer’s program, the IPD also announced the formation of an eight-week long Citizens Police Academy. In a press release Jan. 20, the CPA was described as “a combination of lecture and interactive activities which will give a firsthand look at the department’s functions, resources, and programs.” The program will run from Feb. 25 through April 15 with instructors from the IPD, the Cornell University Police Department and the Tompkins County Sheriff’s Office.

Cole said the PBA fully supports the re-establishment of the Police Explorer Post and the launching of the Citizens Police Academy with the belief that the programs can provide an understanding of the duties of police officers.

“These programs will help to build stronger community relationships with a wide range of age groups,” Cole said. “Although this will be taxing on our limited numbers, we believe the outcomes will be worth the effort.”

Williamson said the addition of the two officers, the re-establishment of the Explorer’s program and the creation of the Citizens Police Academy are all steps to improve the IPD’s relationship with the community.

“Chief Barber is fully committed to strengthening the relationships that we have with every single person in the Ithaca community,” Williamson said. “He fully understands and appreciates the fact that the community is our greatest asset when it comes to improving the quality of services that we provide.”

Barber said the restoration of the Explorers Post and the implementation of the Citizens Police Academy were programs that he has wanted in place since he took over as chief in July 2013. Barber said his goal is to have a transparent police department, which will allow for a better relationship with community members.

Another outreach program Barber said he is planning is coffee with the police chief and mayor. This will involve Barber and Myrick traveling to several coffee shops to meet and interact with the  people that they represent.