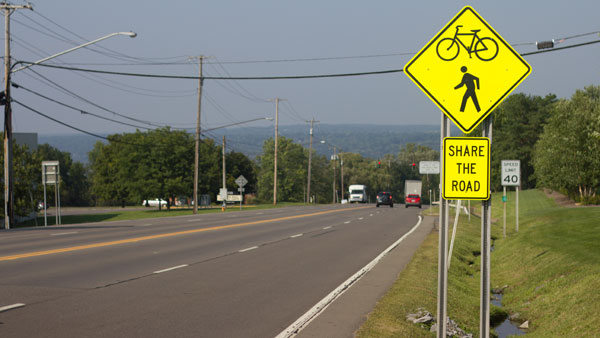 CJ Anasoulis/The Ithacan
The New York Department of Travel installed 'Share the Road' signs after Ithaca College raised concerns about the lack of sidewalk on 96B.
By Kayla Dwyer — Contributing Writer
Published: September 18, 2013

The Ithaca-Tompkins County Transportation Council has allocated $95,000 of federal funding to a study of Danby Road to determine the logistics of building a sidewalk and amending crosswalks for safer pedestrian travel.

In recent years, several pedestrians along Danby Road have sustained injuries, though there have been no fatalities. Anthony Hopson, assistant vice president of community and government relations and civic engagement at Ithaca College, said the college has been concerned by the lack of a sidewalk for decades.

The study, spanning over the 2013-2014 fiscal year, will determine possible sidewalk routes based on analyses of car traffic, pedestrian movement patterns and current construction constraints such as drainage and slopes.

According to the Ithaca Town Board’s application to the New York State Department of Transportation, the estimate of $95,000 was based on anticipated consulting fees. These fees will cover hiring consultants to conduct field studies and collect data from three segments of Danby Road between the city line and its intersection with King Road.

Susan Ritter, director of planning on the Town Board and representative on the Planning Committee of the ITCTC, said she prepared the application for this state grant alongside Town Engineer Creig Hebdon. Because Route 96B is a state road, the town had to request state money for the 2014-2018 Transportation Improvement Plan, the five-year plan that determines which transportation projects to prioritize in Tompkins County.

The ITCTC approved the TIP on June 18 and will go into effect Oct. 1, according to the council’s Web page. The Danby Road study is projected to begin around January 2014, Ritter said.

A large part of the funds will be used to hire consultants, who plan to hold meetings with college students, property owners and other stakeholders who will be impacted by permanent changes to the landscape, Ritter said.

These field analyses and discussions will serve to develop a preliminary design of where and how sidewalks will be put in, how crosswalks will be updated at the King Road intersection — which is currently not handicap accessible — and to estimate how much the construction will cost.

Ritter said this study will make the construction of a sidewalk more likely.

“We’re in a much better position to get money if we’re all set to go and have a plan in place,” she said.

Hopson said the town’s recent action to pursue the study was prompted largely by the student-led effort headed by college alumna Charlotte Roberts ’13.

“In large part due to Charlotte’s efforts, the town has begun to look at this again,” Hopson said.

Roberts said she is pleased and not surprised at the $95,000 allocation for the study.

“Extra allocation doesn’t surprise me too much — it actually makes me feel good about it, because they are guessing that there is no way to tell how much this would cost,” she said.

Her campaign calling for a sidewalk on Danby Road began last summer after she narrowly escaped a car accident on 96B.

Roberts said she recalls driving uphill toward the Circle Apartments in July 2012 when a group of six to eight college students was walking downtown on a non-standard shoulder on Danby Road. She said she swerved into another lane to avoid hitting them.

“People have been walking down this road for decades,” she said. “Why don’t we have a sidewalk?”

Roberts said the experience prompted her to file a petition online, calling for officials to pave a sidewalk on the road. The petition received more than 600 signatures within about six months.

Using Facebook, Roberts said, she organized the Pedestrian Protest, an evening march from the college entrance down Danby Road to the city line, last November. The protest took place on the same day and in the same spot where an Ithaca College student and the public safety officer who came to his rescue were hit by cars in 2008. Both victims survived the accidents.

“I wanted to make sure that we were as plainly visible as possible from the road, and even so, a lot of cars swerved as if they didn’t see us,” Roberts said.

Part of the purpose of the march was to attract the attention of the ITCTC, and the Bicycle Pedestrian Advisory Council joined her in this effort.

“Everything pointed to the ITCTC,” Roberts said. “They were the ones who could take responsibility for it when really no one else would.”

After attending the December meeting of the ITCTC, Roberts said she would be persistent until the town properly addressed the problem. Ritter said the involvement of students like Roberts is necessary.

“The Ithaca College students did a great job at prodding us along to get that going sooner than later,” Ritter said.

Hopson said his job is to assist the college in establishing strategic partnerships in the community. He said he was involved in the Student Government Association when it held a conversation in 2010 with representatives from the Town Board and local businesses to address pedestrian concerns.

At this meeting, Hopson said, the college made inquiries about its concerns to the state DOT but received no response except the installation of some “Share the Road” signs.

After talking with his predecessors about these efforts, senior Cedrick-Michael Simmons, president of the SGA, said the news of the recent budget allocation was well received.

“We’re all excited that this is actually happening,” Simmons said.

Simmons said he sees this as a prime example of witnessing collective efforts over time come to fruition.