Ithacappella conductor sets the tone for the group 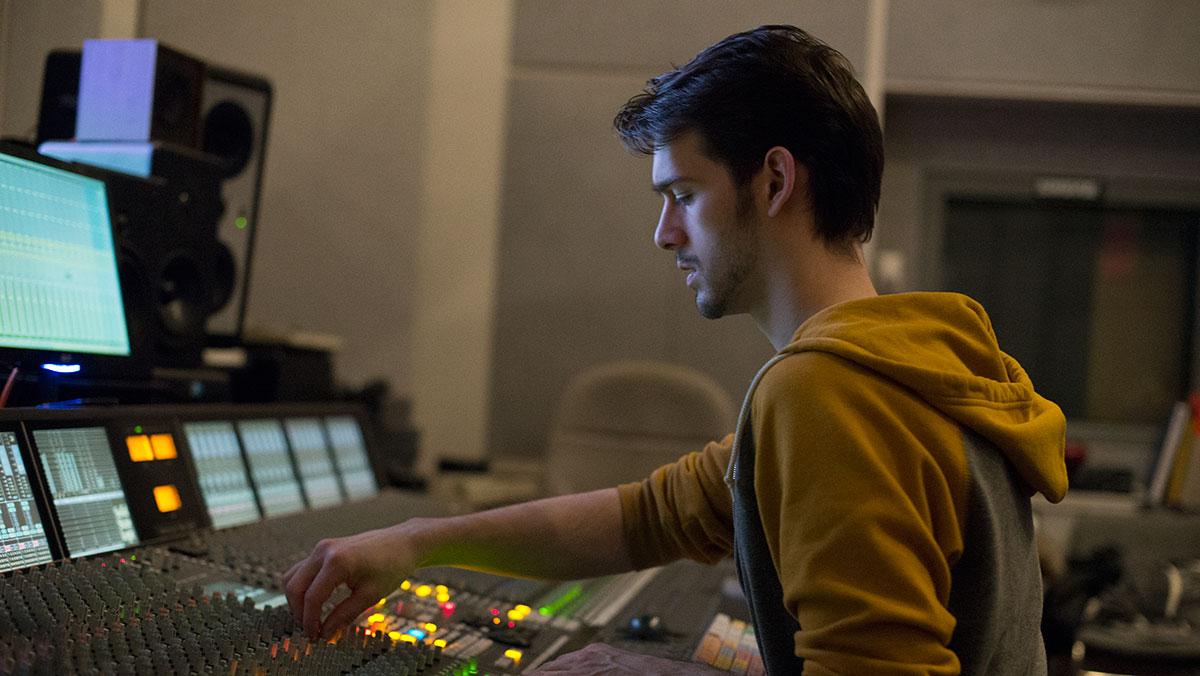 Jennifer Williams/ The Ithacan
As a sound recording technology major, senior David Allen’s courses are geared toward learning how to record songs, mix them and transfer them into a format that can be shared on the Internet or bought on a CD.
By Avalon Singer — Staff Writer
Published: March 31, 2015

As the piano sounds, the humorous and light-hearted atmosphere morphs into a silent focus, as the men stand ready to begin. Commanding full attention, senior David Allen stands among his peers and leads them through vocal exercises before practicing the songs they have prepared.

Allen is the conductor of Ithacappella, the only all-male a cappella group on campus, in addition to being a music producer both within and outside of his curriculum as a sound recording technology major. As conductor, he runs rehearsals, makes sure they are ready for performances and makes musical decisions on how the delivery of each note should sound.

Within Ithacappella’s brotherly atmosphere, he is a friend and an equal to the other members of the group. However, they treat him as a respected leader.

Senior Christopher Frost, president of Ithacappella, said although Allen is humorously sarcastic, when it comes to leading, he is serious and driven.

“I think the biggest thing that I’ve seen him go through in college is the ability to take that humorous side of himself and bring it to something professional and still be respected,” he said.

As a sound recording technology major, Allen’s courses are geared toward learning how to record songs, mix them and transfer them into a format that can be shared on the Internet or bought on a CD. He has taken courses in music theory and music history and has taken vocal lessons through his four years in college. To further fulfill his love of music, he has also taken physics classes to learn electrical engineering in order to have more background for sound engineering.

In the summer of 2013, Allen said, he became interested in live sound, which entails mixing sound, setting up stages and setting up sound systems.

“I’ve been a live sound engineer for Calf Audio, the GrassRoots Festival, Sound on Sound Productions, the State Theatre and a number of other venues in the Ithaca area for the past two years,” he said. “In a different vein, I fulfilled my internship for my degree at Voodoo Amps working as an amp technician for two months.”

Through his various experiences over the past couple of years, Allen has worked with front-of-house engineering, monitor engineering, sound-system design and also the installation and removal of lighting systems, sound systems and staging.

Alex Perialas, associate professor of music performance and director of the sound recording technologies program, said he has seen Allen excel in the classroom setting and also in the professional field where they worked together at the GrassRoots Festival.

“He’s a hard worker, detail orientated, which is important in this business,” he said. “He’s a strong performer, he’s very creative and he definitely puts in the time.”

Besides being a key component of Ithacappella, fulfilling what is needed for his major and getting work experience in the field, Allen has recently been focusing on producing his own music. For the past month, he has been doing a remix each week and creating a new track from scratch.

Allen released a humorous yet innovative track titled “Tartar Sauce,” which includes lines from several “SpongeBob SquarePants” episodes, on March 27. Frost said Allen’s style is different than other music producers at this time and that this is what helps to make his music unique.

“He’s had an eclectic track record so far with the songs he’s been producing,” Frost said. “There’s more space in his mixes than a lot of other people that are doing what he’s doing … what I mean by that is dead time. That’s something that makes him stand out from what’s going on around him.”

Allen’s goal for after graduation is to create a live show by performing his music and remixing other people’s work. He plans to treat this as his full-time job while doing other work on the side in order to support himself financially. Allen also has the opportunity post-graduation to work under Perialas as a recording engineer at Perialas’s downtown facility, Pyramid Sound.

“Hopefully before graduation we will be able to finalize arrangements for that position,” Allen said. “I think working with Pyramid and being able to collaborate with other musicians will help me to grow as a producer and engineer, ultimately having a positive influence on my own music.”

Though he is excited for his future endeavors, Allen focuses on his goal of a new track each week and devotes his time and energy to being an effective conductor.

Frost said Ithacappella has benefitted significantly since Allen began conducting the group, and the singers have not had someone this spectacular leading in years.