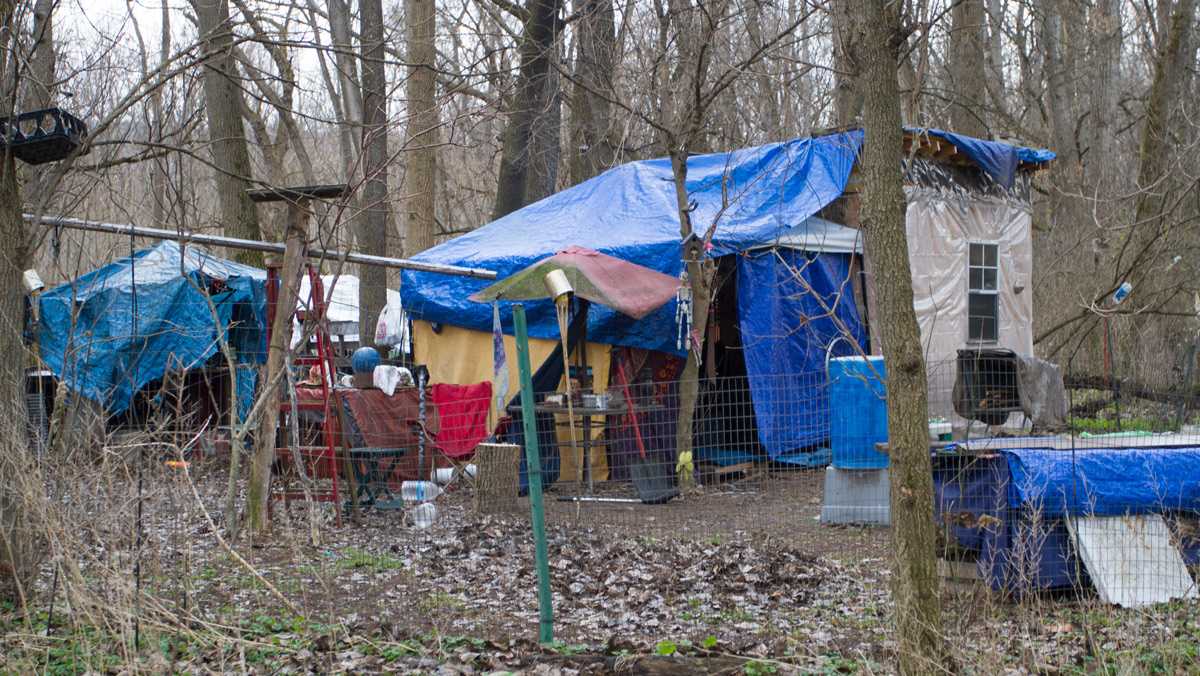 Maxine Hansford/The Ithacan
One of the makeshift houses in The Jungle, an unauthorized neighborhood that houses an estimated 50 people.
By Emily Snyder — Contributing Writer
Published: December 13, 2017

Ithaca College junior Chris Biehn spent last Tuesday morning visiting his friend, Eddie Dejesus Rodriguez, who goes by the name Sinbad. Rodriguez lives in “The Jungle,” a series of makeshift shelters spread along the railroad tracks off of Elmira Road in Ithaca. Rodriguez showed Biehn additions to his home, made out of plywood, tarps and a repurposed tent.

A noticeable increase in homelessness, primarily due to the absence of affordable housing, is putting stress on local shelters and organizations as temperatures drop in Ithaca.

As homelessness increases both nationally and locally, Biehn is leading a student effort to raise awareness of homelessness in the Ithaca area and to raise funds for those affected. Biehn said the campaign will initially distribute supplies to people living outdoors and ultimately expand emergency housing.

Homelessness in the United States has increased for the first time in seven years, according to the Annual Homelessness Assessment Report from the federal Department of Housing and Urban Development. This is predominantly due to the 9 percent increase in the number of people experiencing homelessness in unsheltered locations.

Between 2016 and 2017, homelessness in New York State increased by 3.6 percent, the second–largest rate among 20 other states that increased.

“I recognize the homeless crisis in Ithaca is probably the worst it’s ever been, and I realize with winter rapidly approaching, there’s something that needs to be done,” Biehn said.

The increase in homelessness in Ithaca is a result of the lack of affordable housing, Mike Foster, program manager of the Ithaca Rescue Mission said.

The Ithaca Rescue Mission, located on West State Street, is a nonprofit organization that provides emergency shelter to people without homes, meals for families and individuals in impoverished situations, and services to encourage people to find employment.

With a 1 percent housing availability rate in Ithaca and a high cost of living, many families resort to the Rescue Mission.

“If someone has a car break down or they have a medical bill, all of a sudden they can’t pay rent anymore,” Foster said.

Ithaca ranks eighth in the Market Watch list of the most expensive places in which to raise a family, according to data collected by the think tank of the Economic Policy Institute. High tax rates, high rent rates and costs of childcare in New York state contribute to Ithaca’s high ranking. The annual cost to raise a family of four in Ithaca is $92,603.

There was a 5 percent increase from 2016 to 2017 in the number of people experiencing homelessness in major cities, according to The Annual Homeless Assessment Report. However, 95 percent of homeless people in New York City were considered sheltered by staying in emergency shelters, transitional housing programs or safe havens. The report stated there was an increase in the number of unsheltered people experiencing homelessness in smaller cities and counties within the last year.

“At the local level, what has been proven to be effective both in research and in practice is that helping people get a home is the first step towards them being able to obtain employment, resolve and deal with mental health or substance abuse challenges,” Layton said.

Layton said the affordable housing crisis must be addressed first for change to appear on the national level. One solution is to increase the amount of subsidy housing and the availability of affordable housing, since only one in four people nationwide who would qualify for rental subsidies get one, Layton said.

Richard Bennett, director of the Rescue Mission, said he noticed a significant increase in the demand for beds at the Rescue Mission within the past few years. Bennett said that two summers ago, no more than five of the 12 beds were occupied but  said that this summer, the shelter filled the 12 beds and sought housing for 25 additional people through local hotels and homes.

Foster said the Rescue Mission provided shelter to 45 people Dec. 10 and said he is aware of at least 45 additional people outdoors in Ithaca.

Fourteen people who received services from the Rescue Mission have died in the past year alone, Foster said. Layton said documenting homeless people’s deaths can be difficult because they do not have permanent housing.

Staying in a shelter can be challenging for people with mental illnesses because the confined environment can increase anxieties and discomfort, Foster said. People with addictions also resort to living in improvised shelters within The Jungle for more freedom to use, Foster said.

Rodriguez and an estimated 50 people live in tents and plywood shelters throughout The Jungle. Rodriguez said he estimated 45 out of 50 residents in The Jungle are addicted to drugs.

Although he said he disapproves of some of his neighbors’ habits, Rodriguez said, he appreciates his temporary home where he is secluded from drug activity. He said he refuses to live with self-destructive roommates in unsanitary houses.

The current encampment behind Walmart is considered the third iteration of The Jungle. Foster said authorities have been lenient toward residents of The Jungle by expressing a “live and let live” attitude. However, according to the Ithaca Voice, the city had cleared the area where The Jungle originated, behind the Agway, in 2013. The second Jungle that expanded to Cherry Street was found empty the following year, but camps emerged in the current Jungle. Four years ago, the city cleared trees in the forest to make activity in The Jungle more visible from the road. A dirt path cuts through the newest Jungle to make the area less appealing, Foster said. 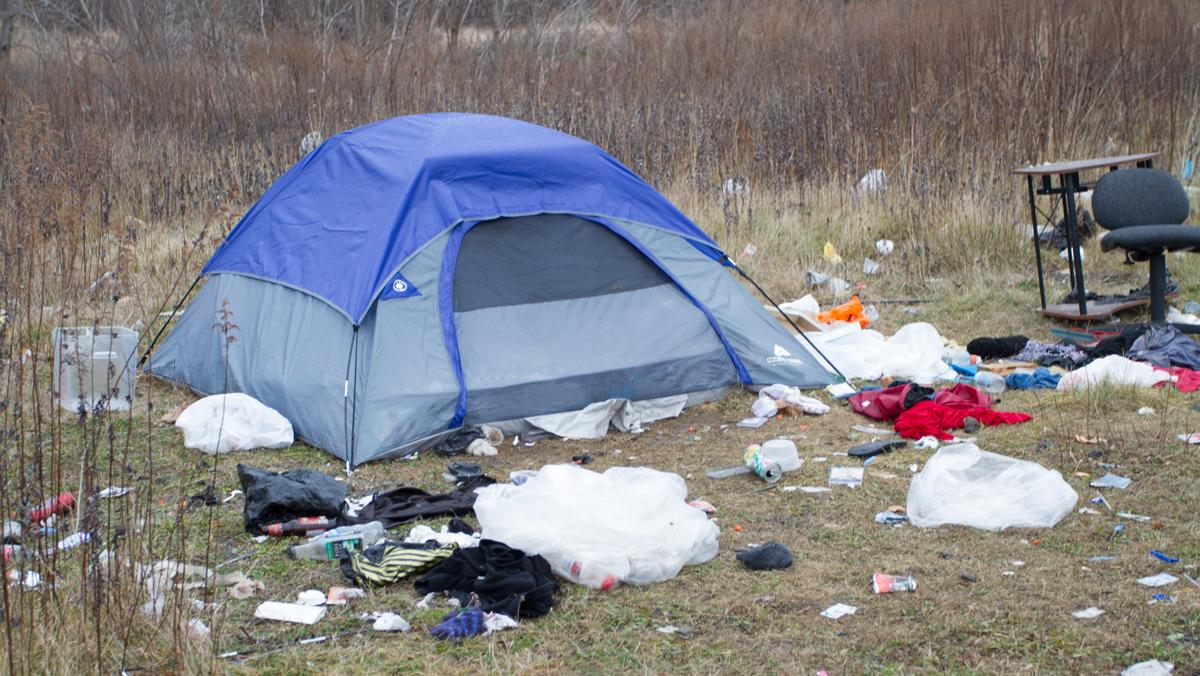 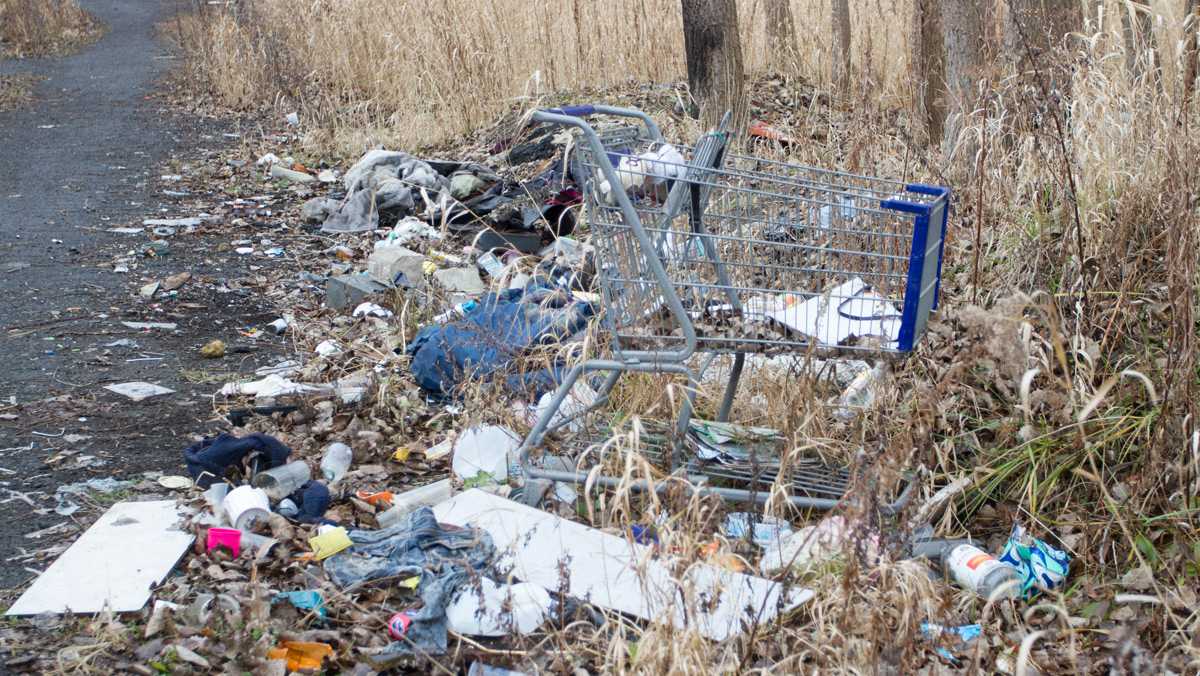 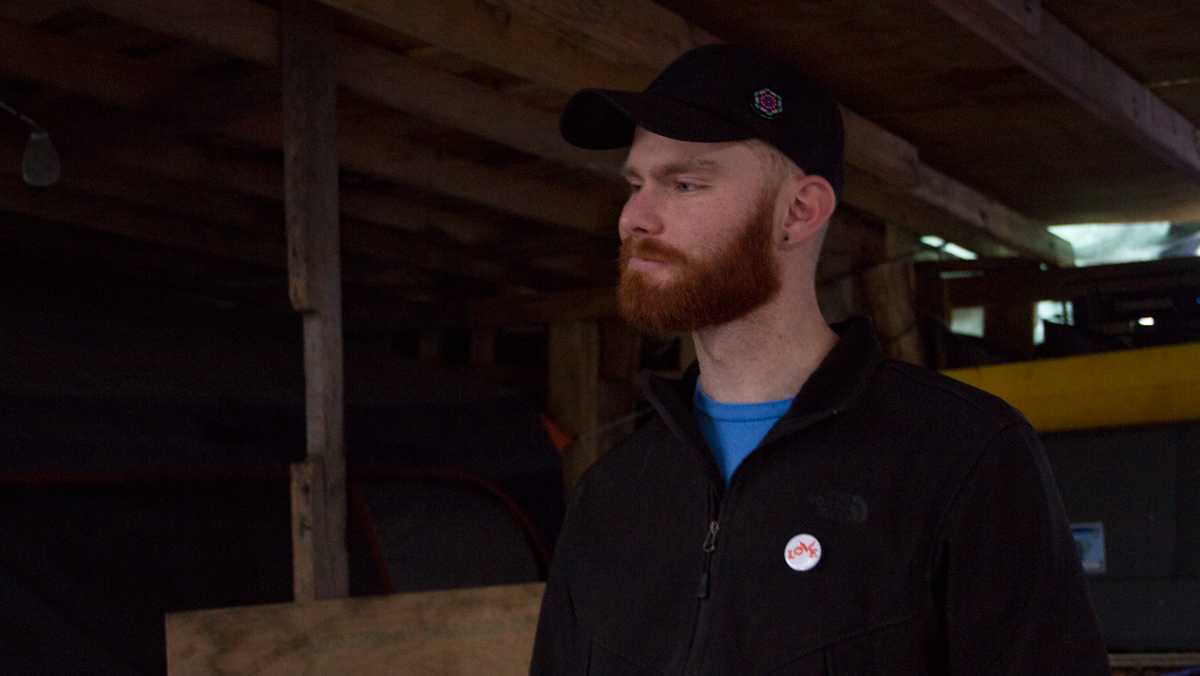 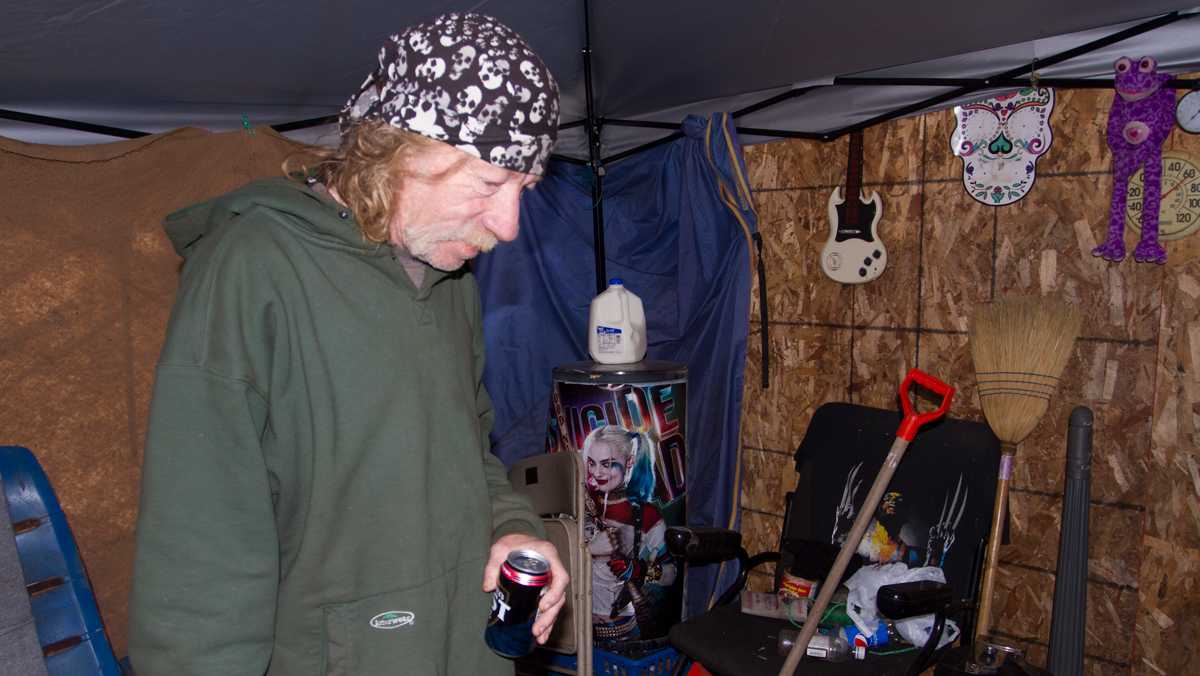 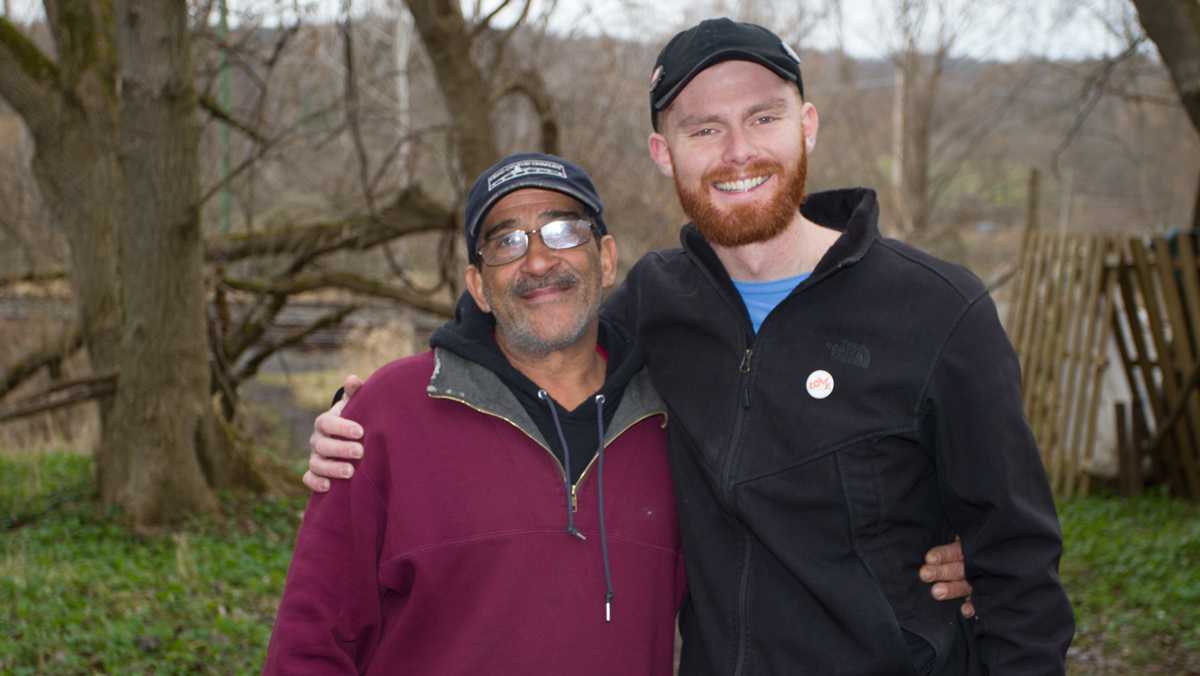 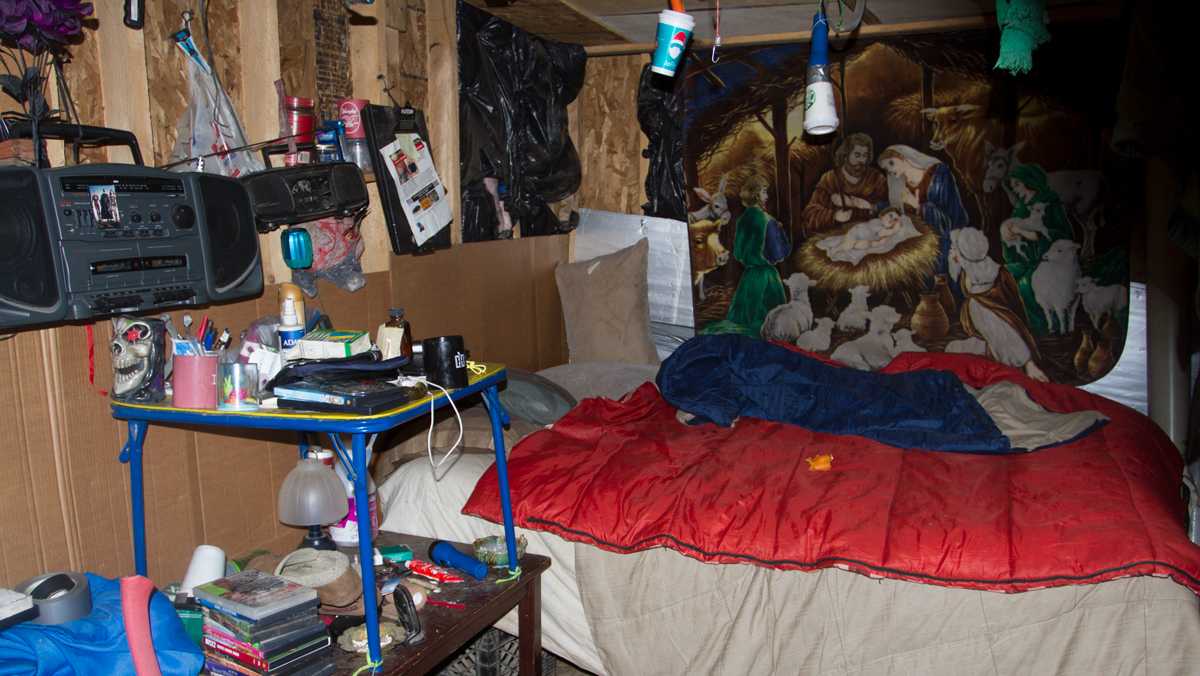 <
►
>
From left, Eddie Dejesus Rodriguez, who lives in The Jungle, stands with junior Chris Biehn. Biehn is the founder of Let’s Help End Homelessness & Hunger in Tompkins County, NY, which aims to bring awareness to local homelessness. MAXINE HANSFORD/THE ITHACAN

Rodriguez said receiving assistance from the government is not easy. The requirements for Section Eight Housing, Medicaid and even food stamps are too unrealistic to obtain, Rodriguez said. As stated by the New York City Housing Authority, Section 8 Housing assists eligible lower-income families to rent housing in the private market based on a family’s size and income. Rodriguez said he has to wait four more years — until he is 62 — to qualify for Medicaid. He said his neighbor Ozzy earns seven dollars too many to receive food stamps. Rodriguez said he occasionally visits the food pantry at the Rescue Mission.

“As we have seen an increase, we are trying to provide basic resources and transportation for food and linkage to services,” Bennett said.

Junior Joe Cruz said college students need to be aware of the economical effects they bring to locals within the city of Ithaca since they play a role in driving up prices in the area.

It is far more difficult picking up side jobs in the winter to pay for food, child support and savings than it is in the summer, Rodriguez said.

“Work is the hardest thing; the students take everything,” Rodriguez said.

Biehn’s campaign, called the The Let’s Help End Homelessness & Hunger in Tompkins County, NY campaign, aims to address the lack of awareness college students and Ithaca residents have toward the extent of homelessness in Ithaca by holding fundraisers and making a public service announcement.

Biehn, who is currently on a leave of absence from the college launched, a Venmo account and a Givebutter campaign to raise money for the Ithaca Rescue Mission. The Venmo account accumulated over $300 within 24 hours. Biehn is still exploring fundraising options like clothing and food drives to provide basic needs to homeless people.

Half of the proceeds from the fundraisers will go to the Rescue Mission’s food pantry and “save a life” packages. The packages are filled with supplies such as blankets and unsustainable propane tanks that can be placed inside plywood and tarp shelters to prevent frostbite and hypothermia. The remaining money raised will go to Second Wind Cottages, an organization that offers 16’ by 20’ housing on Route 13 in Newfield, New York, to homeless men.

“This is all in its infant stages,” Biehn said. “We’re just beginning this process, but it’s a very important process; it’s a timely process, and we’re hoping to get the ball rolling.”

The goal of documenting these individuals is to address the issue in a humanizing and dignifying way, Cruz said. He said he will focus on branding and spreading awareness through social media outlets.

“I think it has to be a group effort for sure,” Cruz said. “It’s so much more when you can bring in the strengths of other people.

Junior Elena Piech was drawn to the campaign because of her interest in social change. She is in charge of the PSA, which will introduce the issue, profile individuals living in The Jungle and announce the campaign’s call to action.

“It’s important to show community members and the students here the issues that are going on right in the same place where they live or where they go to school,” Piech said.

Sleepout helps to raise awareness of the homeless