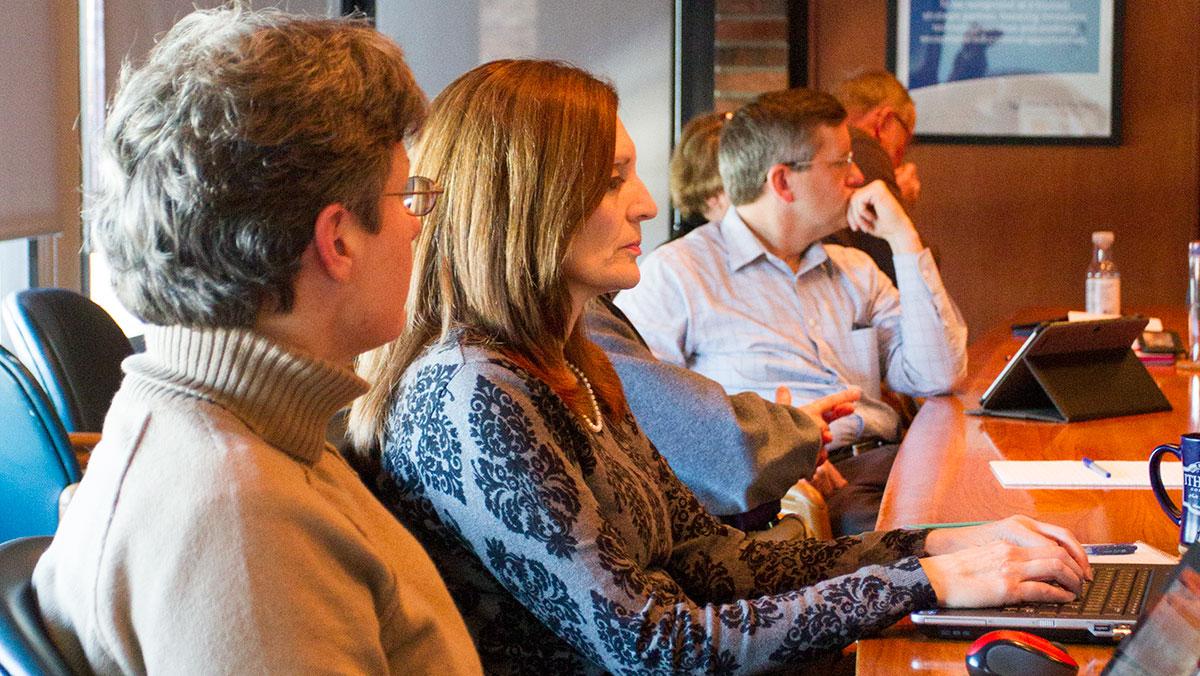 Ithaca College’s Information Technology Services has recently completed analyzing the first round of surveys sent out to 25 percent of the college population in late October and is moving toward drafting its five-year strategic plan.

ITS distributed the 13-question survey to 2,042 students, faculty and staff through the Higher Education Techqual+ Project, a survey platform for assessing college IT practices.  Five hundred thirty-five surveys were completed, which is roughly a 26 percent response rate. The surveys sent out by ITS had an additional section where respondents could write comments.

Marilyn Dispensa, ITS instructional technology coordinator, compiled the results and sifted through over 800 comments. She said the biggest concern among everyone who took the survey was regarding connectivity and access on campus.

“[The respondents], especially the faculty, were very critical of the wireless connectivity,” Dispensa said. “Our customers think that service is particularly poor, and it is below what their minimum expectations are.”

The Techqual+ surveys measured in a scale of one through nine, with one being the lowest and nine being the highest, the respondents’ expectations of having an Internet service that is reliable and consistent across campus, as well as what they perceived current Internet service to be. Dispensa said the overall expectation ranged from approximately 7 to 8.7, while the respondents rated the current service between 6 to 6.8.

“This doesn’t surprise me because I work with customers all the time, so I hear what their problems are,” she said. “Wireless problems have been on my radar for two, three years now. I understand that students especially really have to rely on wireless.”

Another section of the survey was technology and collaboration services, which includes assessments of the access to online services via mobile devices or tablets and technology services for collaboration or presentations. Dispensa said results showed that while these services weren’t rated as being as important as wireless connectivity, the respondents felt ITS was doing below what they expected.

Keith “Mac” McIntosh, associate vice president of ITS and the chief information officer, said the survey results and S.W.O.T. — Strengths, Weaknesses, Opportunities and Threats — and P.E.S.T. — Political, Economic, Social and Technological — analyses ITS has conducted will be the basis of the strategic plan he hopes to have drafted by April.

“The [ITS] team is now working on what the important themes are that are bubbling up from these analyses, and from those themes we’ll take some data points and set our goals,” McIntosh said. “These goals will be our objectives, which will tell us what actions we have to take.”

Paula Wedemeyer, head of the ITS project management office, said a few of the themes the strategic plan committee has come up with are networking infrastructure, operational excellence and user innovation. She also said she hopes more themes will be added in the upcoming months as she and others in the committee plan to talk directly to the college community for additional feedback.

“In addition to doing the Techqual+ survey, we wanted to actually go out to each individual area and do a one-on-one interaction that we are calling campus outreach,” Wedemeyer said. “So a small group from ITS goes out and meets with the [Roy H. Park] School of Communications, then we’ll ask based on what we learned if we already captured everything or if we need to add something else,” Wedemeyer said.

In addition, when the first draft of the plan is complete, McIntosh said he and his team will meet with the college community to get feedback on the initial draft before submitting it to the administration for review.

“The draft in April, whether that will be a 70 percent or a 90 percent completed draft, I’m not sure yet, but I want to get it in front of the college community early enough so people can get their input on it,” McIntosh said. “Then we’ll correct it based on that feedback, update it again and then bring it back in August for another public review, then try to push it through for approval in time for next year’s budgeting cycle.”

After doing all this, McIntosh said, he hopes by next year, when the Techqual+ surveys are distributed again, the overall satisfaction with technological services will improve.

In the survey results, Wedemeyer said there were also complaints about technology and services that are not within the domain of ITS. Comments on the campus having poor cellular service, the college’s website being difficult to navigate and the lack of electrical outlets were frequent complaints, she said. She added that ITS is planning on working with appropriate departments to resolve technological issues even though they are not controlled by ITS.

“We can’t throw our hands up and just say, ‘It’s not our problem, sorry about that,’ so we are going to Marketing and Communications to do something about [the college’s] website and work with facilities,” Wedemeyer said. “We are not operating in isolation, and we are saying there are some things that we can’t do, but we can help to resolve problems.”

McIntosh said he and his team will work aggressively to come up with a draft of the strategic plan that not only aims to resolve ITS’ problems but technological issues of the entire college community.

“I’m asking my team to take 12–18 months’ work and compress it into 6 1/2 months,” McIntosh said. “There’s a lot of work condensed in a small period of time. The big thing that I want folks to understand is that this is an Ithaca College ITS strategic plan. It’s not Mac’s. It’s not IT. I’m here to meet the needs for all of our faculty, staff and students.”