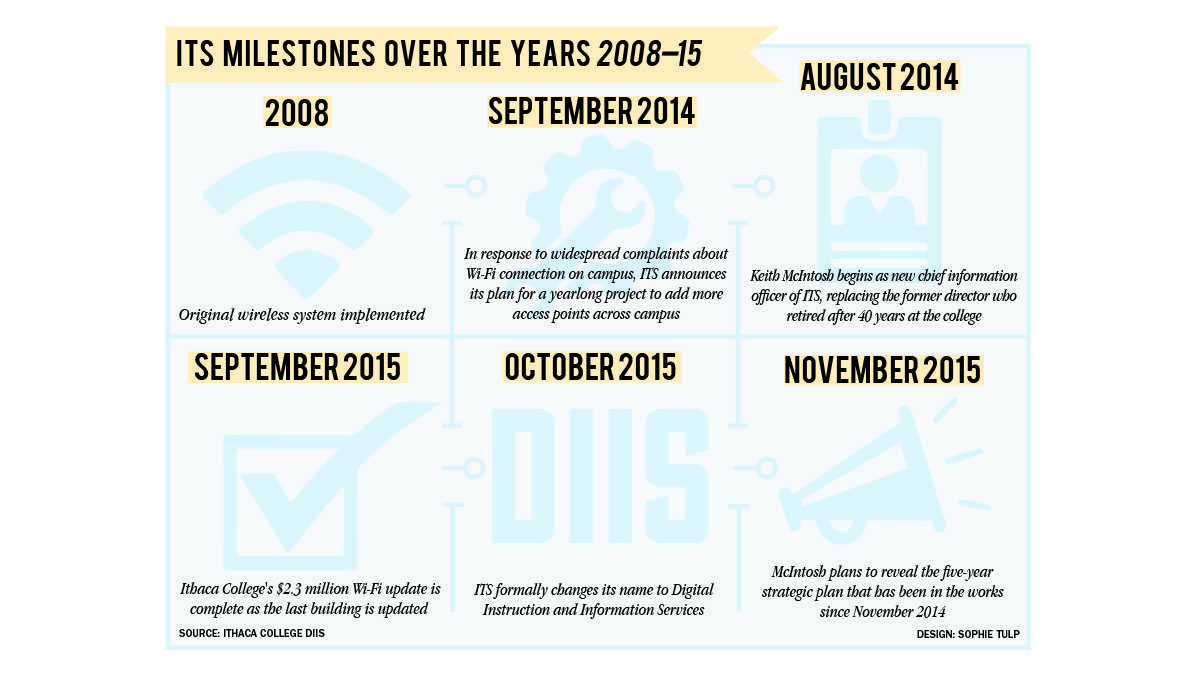 On Oct. 7, a crowd of more than 400 freshmen filled almost every seat in Ford Auditorium to hear alumni Bob Iger, chairman and CEO of The Walt Disney Company, and David Muir, anchor of ABC’s World News Tonight, Skype in to speak about the future of communications. The discussion, part of the Roy H. Park School of Communications S’Park class for freshmen, featured smooth video quality, limited buffering and a constant connection to Wi-Fi throughout the hourlong session.

This differed from the class’s Skype session with Iger and other influential alumni in previous years, when the Wi-Fi caused the picture and audio to be distorted and garbled. Bryan Roberts, associate dean of the Park School, called the sessions “brutal” and “embarrassing,” making the Skype calls almost impossible.

This occurrence and others inspired Roberts to take the lead in forming an initial Campus Wireless Working Group in collaboration with Information Technology Services. The group assessed the needs of the campus for better Wi-Fi connection, and the yearlong installation of 1,000 additional access points across campus, a project which cost $2.3 million, is complete as of Sept. 9. However, Roberts said it took a change in ITS leadership to get there.

“A lot of the guys had been here for 20, 30 years and just didn’t understand the change in technology,” Roberts said. “Innovation was perhaps not at the forefront of their thinking, and that hurts your whole organization.”

The new leadership came in the form of Keith McIntosh, now the chief information officer. McIntosh replaced Ed Fuller, former associate vice president, who had been with ITS since the 1980s. Additionally, Michael Taves, executive director of ITS, and Mike Testa, director of infrastructure and communication services, retired as well, leaving McIntosh to move positions around throughout the department in a restructuring of the organization.

After over a year of planning, ITS formally became Digital Instruction and Information Services on Oct. 16 in order to place a greater emphasis on teaching and learning with technology, increase efficiency in its services and transition the college to better function in the digital era, McIntosh said.

“This is what the institution needs … Now is the time for Ithaca College to make this transition,” McIntosh said. “The traditional way that ITS has been since the 1980s has not changed in the last 20–25 years, and it needs to.”

Before the update, faculty members like John Barr, associate professor in the Department of Computer Science, struggled to teach his programming classes without functioning Wi-Fi and did not get much responsiveness from ITS. Barr said it got to the point where he could not teach class because the students could not connect to the Wi-Fi, download software or do projects.

Jack Powers, associate professor in the Department Media Arts, Sciences and Studies, teaches a class in building media apps, which uses large amounts of Wi-Fi daily. Suffering from the same problems as Barr back in 2013, Powers now calls the difference “night and day.”

“It became very, very frustrating when we couldn’t get Wi-Fi access,” Powers said. “I also have exams that were online, and that was creating a massive headache … I don’t even mention it now. We will be building apps with Wi-Fi and nobody gets knocked off.”

Junior Samantha Rhodes was in Powers’ class as a freshman.

“Half the class couldn’t get to Wi-Fi at one point,” Rhodes said. “But by the time the class ended, they made huge improvements with Wi-Fi. I am a junior now, but I’ve definitely seen those improvements.”

The “old” system of ITS, which McIntosh calls “Mode 1,” was primarily focused on creating and maintaining programs like HomerConnect, Parnassus, databases, word processors, storage and security. However, the new system places a greater emphasis on services — teaching and learning with technology, using cloud-based services and creating flexible systems — that can change rapidly with the demands of technology.

Under the new system, students are likely to see teachers integrating technology more fully into their classrooms, McIntosh said, with greater support from DIIS. Along with the restructure of the department, McIntosh added two instructional designer positions that will help faculty use technology in their lessons.

McIntosh said his long-term goal is to enable student learning outside of the classroom while maintaining access to the technology they need for their lessons.

Lisabeth Chabot, one of the college’s librarians, has given ITS input for the Wi-Fi project and advocated for teaching and learning with technology. Before the Wi-Fi project, she was on the Information Technology Planning and Advisory Committee, which was formed in 2005 to assess which projects should be the college’s priority.

They identified teaching and learning with technology as a top priority over 10 years ago. Looking at the new structure, Chabot said she believes the organization is starting to evolve to meet those needs.

“Over time, we identified that we needed more robust services to support teaching and learning,” Chabot said. “As more teaching and learning happens with devices, clickers, streaming, video, audio — all those things — we recognized for a long time that there is going to continue to be a support for that and a need for instructing people in the best use of it.”

When McIntosh arrived in 2014, he surveyed faculty, students and administrators to see what they identified as their biggest issues with ITS on campus. From the data, he formed a strategic plan to address the reported problems, which were mainly issues with the Wi-Fi and how to create virtual communication spaces at the college in a Google Docs–like forum. Before McIntosh came in, the department had never worked off of a strategic plan before.

Matt Gorney, digital media coordinator for Technology and Instructional Support Services, said the strategic plan, coupled with the change in leadership, allowed DIIS to become more accessible to staff and students in and outside of the department. Gorney has been at the college since before 2013 and is one of the only members of DIIS that is still in the department from before the Wi-Fi project.

“When I started here, we didn’t have a strategic plan. Now we do, and that helps me feel more comfortable about knowing the direction we are supposed to go in,” Gorney said. “A lot of times when you are running a department and you don’t have a document to look at or a strategic plan to tell you this is how we do things, then it creates a little bit of chaos.”

With the changes in job descriptions, titles and positions, McIntosh said it would be too difficult to explain what each individual staff member is doing now in DIIS as opposed to what they were doing before in the old structure of ITS. He said around one-third to one-half of his staff’s job descriptions have been changed.

While the strategic plan and the survey results are not yet public information, McIntosh hopes to release them online in November and begin implementing the top priorities soon after.

Of these priorities, McIntosh said he sees “collaboration capabilities,” or virtual, real-time connecting between communities of students, faculty, staff and alumni, as the biggest area people indicated they would like to see progress and that he would like to carry out.

“We want to be better … and the Wi-Fi could be an example of that,” McIntosh said. “We are listening to the college community, we understand there are issues with certain areas that need improvement … and in the new organization that is what we want to do.”