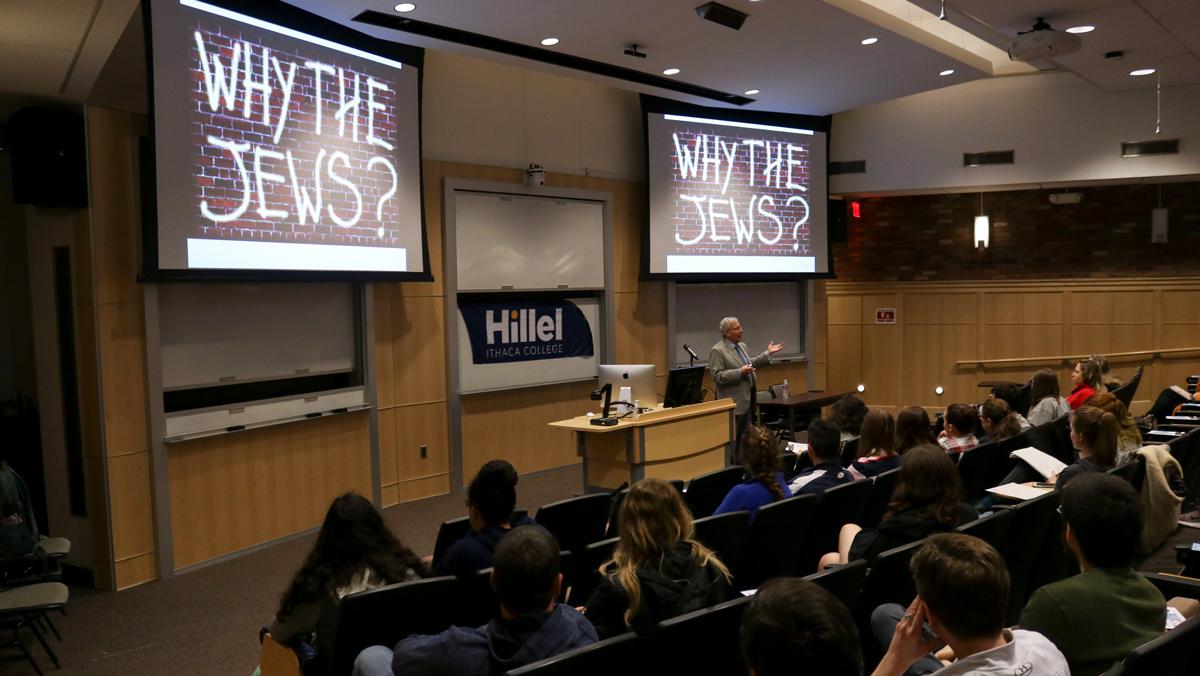 Caroline Brophy/The Ithacan
Steven Hess, Jewish Holocaust survivor and educator, spoke about his experiences during World War II being transported to Westerbork, a dutch transit camp, and Theresienstadt, a concentration camp. He said he and his family emigrated to the United States as Jewish refugees from World War II in 1947.
By Maggie McAden — Staff Writer
Published: April 16, 2018

Steven Hess, Jewish Holocaust survivor and educator, said that in January 1945, his mother sold her wedding band on the concentration camp black market to buy him and his twin sister each a single piece of bread with sprinkles for their birthday. Now, he said that he will never let a piece of bread go to waste.

“I could not throw a piece of bread away, and I still can’t,” he said.

This is how Hess concluded his talk to 50 students, faculty, staff and community members at Ithaca College in Textor 102 on April 12 for Yom HaShoah, Holocaust Remembrance Day. His visit was sponsored by Ithaca College Hillel and organized by Lauren Goldberg, executive director of Hillel.

Hess and his twin sister, Marion, were born in Holland on Jan. 14, 1938. His parents, Ilse and Karl, had left Germany two years prior, as they believed that Holland would not be invaded by Nazi Germany.

In 1943, when Hess was 4 years old, he and his family were taken to Westerbork, a Dutch transit camp that served as a stop on the way to the Auschwitz, Sobibór, Theresienstadt and Bergen-Belsen concentration camps. From 1942 to 1943, 97,776 Jews were deported from Westerbork. The Germans deported 54,930 Jews to Auschwitz, 34,313 to Sobibór, 4,771 to Theresienstadt and 3,762 to Bergen-Belsen.

In February 1944, on his parents’ 10th wedding anniversary, Hess said his family was moved by cattle car to Bergen-Belsen in Germany.

Hess said he soon became desensitized to the horrors of the camp, such as starvation, disease and death. For example, he said, he recalls that many of the beds had the slats torn out of them to use for firewood in the winter. He also said he learned math by counting corpses with his sister while trying to figure out which head belonged to which body.

“It was absolutely a normal sight,” he said. “It was all we knew.”

Hess said the Nazis put many of the surviving Jews, including him and his family, on three trains to Theresienstadt, an extermination camp. He said each train held approximately 2,000 Jews.

“I remember my father lying on top of me, and crying because he was hurting me,” Hess said. “It was rib against rib, and all was dark, and all I saw were these shafts of light coming from the curved ceiling of the car.”

Shortly after the train was captured by the Allied powers, he said, they were liberated in a small farming town in Germany. Hess said he and his family then made their way back to Holland and shortly after got visas to the United States. The family came to the U.S. on Jan. 1, 1947.

At the end of World War II, eight million people were displaced from their homes.

and there were an estimated 250,000 displaced Jews that lived in camps established for displaced people throughout Europe. In 1948, Congress passed the Displaced Persons Act, which eventually allowed more than 80,000 Jewish refugees to emigrate to the U.S. By 1952, 136,000 Jewish refugees also emigrated to Israel. Twenty thousand refugees also emigrated to other regions and countries that accepted people displaced by World War II, including Canada, Australia, New Zealand, Western Europe, Mexico, South America and South Africa.

Hess also said it is important to avoid viewing the Holocaust universally because the experiences differed based on the individual. The likelihood of survival was often dependent on the country the Jews lived in and the attitude of the local population toward them, he said. Hess said it is pure luck that he and his family, especially with him and his sister being very young, survived.

“Any Jew who survived Nazi-occupied Europe, such as my family, did so purely because of luck,” he said. “I mean, you couldn’t be smart enough. You couldn’t be rich enough. Luck is not equally distributed. It never is.”

He also said he thinks his father’s Aryan appearance — blue eyes and blonde hair — and his family’s German tongue may have helped their chances of survival.

Hess also said that when he moved to America, he struggled with both the language and the culture. Although he still embraces his Jewish heritage, he said it is difficult to practice the Jewish faith.

Hess said that one of the reasons he shares his story is because it is important to remember the Holocaust and the circumstances under which it unfolded.

“This happened in the most advanced, scientifically and culturally advanced country in the world, Germany,” he said. “It was amazing what the Germans did, the good things that had been invented, the music and arts, and if it can happen in a place like that, it can happen anywhere.”

A study conducted by the Conference on Jewish Material Claims Against Germany, an organization that advocates for the compensation and care of Holocaust survivors, found that 41 percent of millennials believe that only two million or fewer Jews were killed in the Holocaust. In reality, approximately 6 million Jews died. Sixty-six percent of millennials were also unaware that Auschwitz was a concentration camp. Fifty-two percent of Americans believe that Hitler was not elected into power but came to power by force.

Goldberg said she believes that hearing stories firsthand is more impactful than any other form of Holocaust education.

“I think that the impact that hearing a firsthand account of a survivor can have on an individual is not replicable in any other format,” Goldberg said. “All of the movies and documentaries and classes that you take, you can grow your knowledge base so broadly, but there’s something that transfers, I think, into your DNA when you are sitting with that survivor.”

Rachel Steinmetz, junior and member of Hillel, said her grandfather was a Holocaust survivor and that it had a profound impact on her life. She said she thinks it is important for others to hear firsthand accounts of survivors.

“I continue to want to learn more and really understand what happened to these people,” Steinmetz said. “I think it’s important that people continue to stay educated and be aware because anti-Semitism is all around us, and it will continue.”