As 1,250 Ithaca College seniors prepare for commencement in a few weeks, they are set to face the reality of a competitive job market. And the prospects aren’t looking too great. 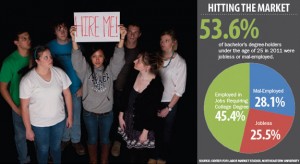 The Associated Press reported this week that almost 50 percent of recent college graduates were either unemployed or underemployed in positions that did not require college degrees, bringing employment rates for young adults to the national spotlight.

According to the Center for Labor Market Studies at Northeastern University, the percent of bachelor’s degree holders under 25 who are employed in a job that required college degrees has decreased in the last 10 years. In 2000, 58.8 percent of graduates landed jobs requiring college degrees. And in 2011, 46.4 percent or about 1.3 million graduates were employed in jobs requiring a college-level education.

Though 74.5 percent of college graduates under 25 were employed after college in 2011, 28.1 percent were “mal-employed,” which means more than one in two college graduates faces the possibility of having to settle with being employed as a waiter, retailer or any other low-paying job that does not require a set of college-acquired skills.

Martha Gray, director of institutional research at the college, said the college is currently conducting a survey to find out how many of the college’s 2012 graduates have already secured employment.

Elise Springuel ’11, who majored in  communication management and design, went through many job interviews after college during which she was told there was either a more experienced candidate for the job or that she was overqualified. So she went back to her summer job as a bartender and waitress.

“It was incredibly frustrating. It’s very downtrodding — it’s a big ego blow,” she said. “You graduate college being told that the world is your oyster, and you feel that way.”

In November after graduation, she got a new job at a jewelry store and applied to Americorps at the same time. Though it wasn’t exactly what she planned on doing with her degree, she accepted a job in the Anti-Hunger Empowerment Corps, which ended up being along the lines of what she intended for a career goal in food and social justice.

“It wasn’t quite the job I thought I would end up with — a lot less pay than you expect with an entry-level position — but I’m doing work that I love, and the wonderful thing about AmeriCorps is I’m doing a lot of work that I wouldn’t get to do in an entry-level position,” she said. “It’s providing me with all sorts of opportunities that are way beyond the desk job.”

Andrew Sum, director of the Center for Labor Market Studies at Northeastern University, said the low number of college graduates employed is a result of the global recession five years ago that still lingers in the economy.

“The labor market is still kind of weak,” he said. “A large part of what is going on here is the fact that we are still recovering from a very deep recession, and so when you enter the labor market at a time like that, young people always suffer the most.”

Yet, Sum said there is still enough incentive in receiving a college education.

“It’s just that over the long haul, on average — and that is the key thing that most people don’t emphasize, it’s still on average — that your long -term earnings outlook are always going to be better if you go to college than if you don’t,” he said.

According to the National Association of Colleges and Employers, class of 2012 graduates can expect a 10.2 percent increase in hiring compared with the class of 2011, and experts agree this year students will have a better chance at landing a job in their field.

John Bradac, director of career services, said opportunities are increasing and those graduating this year will face a “healthier” job market.

“Students who have actively looked for a job — and I would say actively means doing more than simply applying for jobs via some search engine — who have actively been involved with their career development, they are finding jobs left and right,” he said.

However, based on annual rankings, some fields’ hiring outlook are listed above others. Career Cast, a U.S. and Canadian job database, recently ranked the best and worst jobs in the United States. The rankings are based on several factors, including work environment, stress level, physical demands and income. The only two on the list of worst jobs that generally require a bachelor’s degree were news reporter and broadcaster. It’s the first time two media jobs made it on the list of the worst. Some others that made the list were dairy farmer and lumberjack.

Darius Conger, assistant professor of economics at the college, said in the last couple of years employers were most likely to hire applicants who had been laid off during the recession because of the amount of experience they offered.

“That’s a no-brainer,” he said. “And that is probably what pushed those college graduates who were employed down into jobs that you may say, ‘Well perhaps they are overqualified for them.’”

Career Services has increased its number of users in the past few years. Last year, there was a 32 percent increase in students and alumni who sought counseling from the center, Bradac said. There were more than 7,000 contacts as opposed to the usual 5,000 to 6,000 annual users because more students were concerned about getting employed after college.

Eloise Greene, professional development coordinator in the Roy H. Park School of Communications, said jobs are available for graduates, but students are not taking advantage of the opportunities the Park School has to offer.

“I don’t understand why they can’t find a job. There are jobs out there,” she said. “Use SPJ, use ICTV, WICB, The Ithacan, Buzzsaw, all the different organizations, use internships, use every opportunity that is available to you — and students aren’t doing that.”

Some of the top jobs to be going into this year, according to Career Cast, include software engineer, actuary, human resources manager and dental hygienist.

Marissa Sternberg ’11, who has a psychology degree, has not been able to find a job in her field. She works at her local mall and makes $9.20 an hour, but she said she is still hopeful she will find a job that lets her apply the skills she acquired in college.

“I would definitely say if you’re graduating this year to be prepared for a lot of rejections,” she said. “Sometimes, if you don’t have a lot of the skills and the experience some of the employees are looking for, you’re going to have a tough time finding a job in your field.”