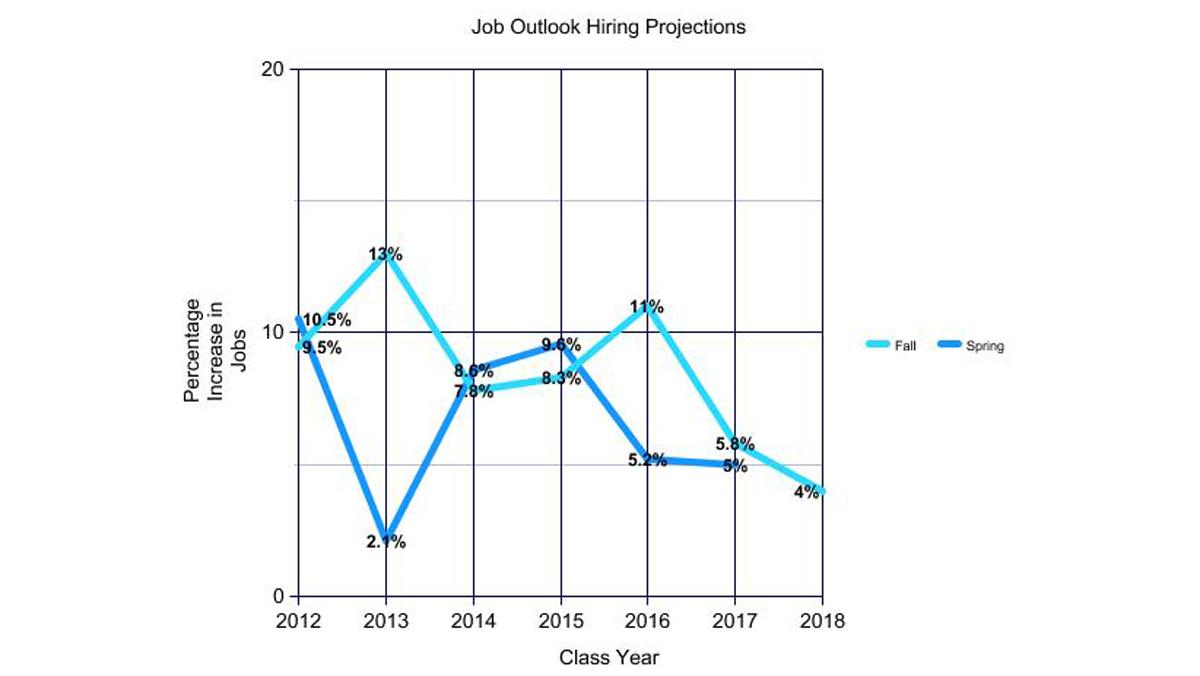 As the fall semester comes to an end, seniors who will be graduating early have something to look forward to. Ithaca College graduates will be entering a favorable job market.

The NACE’s Job Outlook 2018 survey shows that while the increase is lower than previous years, it still projects a positive market for the college graduates. Since the job outlook survey has different respondents every year, it’s not an exact year-to-year comparison. The organizations that are decreasing their hiring numbers said it was due to lack of turnover, lack of work, organizational changes and uncertainty in the marketplace.

There are approximately 254 expected graduates in December, according to the Office of the Registrar. The graduation ceremony was on Dec. 9 in Emerson Suites.

Andrea Koncz, a research manager for NACE, said the increase in jobs is due to older employees retiring, which makes room for employers to hire recent graduates.

John Fracchia, associate director of the Office of Career Services, also said the increase in jobs is due to the retirement of the baby boomer generation and the improvement of the economy.

Fracchia said the increase in jobs is a continuation of what has been a long-term trend for the last several years as the economy continues to recover from the 2008 financial recession.

“If you go back and look at NACE’s Job Outlook surveys, you’ll definitely see an upward trend, and this is supported by the number of job postings that we get from companies who recruit at IC,” he said.

Environmental studies major Jake Barney ’17 graduated early. He said he was not planning on graduating this fall semester. He said studying abroad helped him, since all the classes he took went toward his major, which is not the case for most students. Barney said he has plans to substitute–teach at his hometown high school.

“When I was registering for my classes for senior year, I realized that I had taken most of the classes,” Barney said. “I just sent an application to substitute–teach at my high school, and my goal is to go to law school next fall. I’m trying to find work between now and law school.”

Even though Barney said he is happy about the job outlook, he said he feels like he would not be able to find a job in his field, which is why he decided on going to law school.

Koncz said most employers recruit during the fall. This year, employers are looking for graduates who have a degree in business, Koncz said.

Television-radio major Riley Ludwig ’17 also graduated a semester early. Although she does not have plans for what she will do after graduation, she said she has starting looking for jobs.

“I haven’t been actively applying for jobs mostly because of a personal situation, so it will take a month after graduation to relax, which a lot of people recommend sometimes anyway,” Ludwig said. “I’ve been really fortunate because I’ve had a few internship experiences over the course of my college career, and I’ve been contacted by those companies about potential job opportunities.”

Ludwig said she has planned on graduating early since she came to Ithaca College with 30 Advanced Placement credits that transferred.

Even though it is great that the trend is going upwards, it still does not entirely eliminate the stress that comes with trying to land a first job, Ludwig said.

Hiring outlook for Class of 2016 is more favorable than 2015