Journalist speaks about communication methods for those with autism 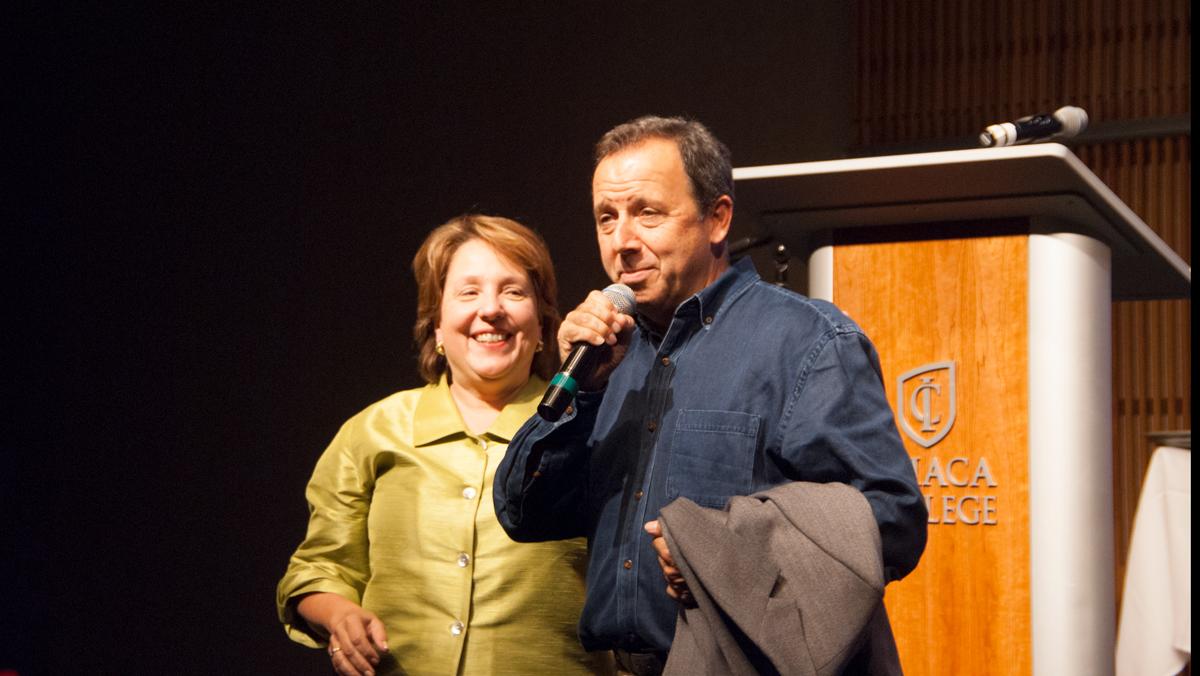 Elena Chang/The Ithacan
From left, Diane Gayeski, dean of the Roy H. Park School of Communications, stands with Ron Suskind, an award-winning journalist, as he addresses a crowd of students during a speech he gave Sept. 28 about alternative communication skills he learned through working with his autistic son.
By Laura O'Brien — Contributing Writer
Published: September 29, 2017

Ron Suskind, a Pulitzer Prize–winning journalist and critically acclaimed author, spoke to the Ithaca College community Sept. 28 about the lessons he learned in alternative communication methods through raising his autistic son, Owen.

Suskind said his family’s most important breakthrough with Owen was their realization that his passion for animated films could be utilized to form emotional connections that are difficult to attain with autistic children. The Suskind family spent hours together watching Disney movies in their basement, which allowed them to bond with Owen once he was diagnosed.

“The most meaningful conversations I had with Owen were the ones in that basement,” Suskind said. “It’s about the stories we tell ourselves to make our way in the world.”

Prior to the presentation in Emerson Suites, Suskind also held a small reception with a handful of students and faculty members interested in his work. Freshman Abby Atkeson said attending the reception was a positive experience. Suskind reflected on the importance of storytelling within the mediums he has worked in, ranging from journalistic pieces to his recent documentary.

“He talked about culture being bigger than strategy,” Atkeson said.

Suskind also gave a short presentation to those enrolled in the minicourse “Life With Autism Spectrum Disorder (ASD): Fact From Fiction.” The course explores the portrayal of those with autism in the media. The class viewed Suskind’s documentary Sept. 26.

Suskind spoke about the power of evolving communication, both in connecting with those with autism and on a much larger, global scale. He also said communication allows society to find common ground, even in the midst of different backgrounds and perspectives.

“You and I seem to have nothing in common, but of course we do,” he said. “We are identical in all of the essential ways. All humans are.”

Suskind received a lengthy standing ovation that included at least a minute of applause and only concluded at his urging. Freshman Madison Zaccagnino said Suskind was an innovative speaker who excelled at appealing to his specific audience.

“He did a good job of relating it back to us in some way,” Zaccagnino said. “I mean, we’re just college kids who are going to a talk, so it was nice that it felt like he was talking to us and not at us.”

Bob Woodward, most famous for his investigations of the Watergate scandal with fellow journalist Carl Bernstein, spoke to student and local media this afternoon about his work as a journalist and author, and about the war in Iraq. Woodward, whose latest book “State of Denial” will serve as a centerpiece for his presentation at 7:30…

Senior Kristen Axelsen is an A student who is planning to spend the five years after her graduation working hard to earn a doctoral degree in psychology. But for three semesters at Ithaca College, it was all about laughter.