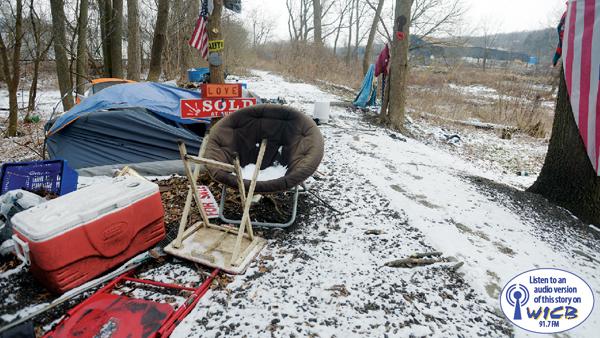 The Ithaca Jungle, located off South Fulton Street near Ithaca Agway, has been home to some of the city’s homeless for at least five decades. Births, deaths and marriages have happened there. People have come and gone. But today, all of its inhabitants have roofs over their heads, and the Ithaca Jungle is empty.

The tents where dozens spent many nights have collapsed under the weight of the snow. The ceramic plates are empty. The small area of land known as The Pit — where people would gather in the evenings for a drink — is now a mass of ash from the fires that once warmed the jungle inhabitants. Nailed onto a tree is a box with the words ‘Jungle Brothers’ on it. A few yards away, an American flag is pinned to the bark of a leafless tree.

In the first week of December, Newfield resident Carmen Guidi found shelter for the 10 remaining inhabitants of the Jungle. Guidi, a board member of Community Faith Partners, moved them out of the chilly Ithaca Jungle and gave them new homes, new jobs and new lives.

Guidi said emptying the jungle was not his motive when he first visited the Jungle three years ago.

“I just wanted to help my friends,” he said.

Guidi was born in Ithaca and raised in Newfield, where he still lives and is the owner of Guidi’s Collision Services. Guidi said he was inspired after a mission trip to Haiti and wanted to make a change in his own community.

“What I saw there in Haiti, it just shook me,” he said. “It just rocked my whole world.”

When he returned to Ithaca in July 2010, Guidi began to contact agencies to find out if there was any way he could help the people around him. When Guidi heard about the Ithaca Jungle, he decided to visit. With six large pizzas in hand, he walked into the jungle and into the inhabitants’ lives.

Guidi’s efforts to house the inhabitants and find them work has cost him about $50,000, but he refuses to take credit.

“When the guys that I have helped try to give me the credit, I say it’s not me — it’s the Lord working through me,” he said.

Tom Persun lived in a tent in Ithaca Jungle for nearly four years. Persun was among the group of inhabitants that Guidi moved out of the jungle. Today, Persun lives in a trailer down Jackson Hollow Road in Newfield. A thick sheet of snow covers the trailer, but it is 80 degrees inside. In a corner, a small TV screen is playing Jesse James’ “History of the Chopper.”

Persun said he remembers the bitter cold of the Jungle. He said one of the hardest struggles was staying warm and keeping his tent from collapsing under the weight of the snow.

When asked what he misses about the jungle, Persun said he didn’t miss anything.

“Not a damn thing,” he said. “It was a hard way of life, living in a tent, especially on days like today.”

However, he said, he does miss his friends.

“You make friends you can depend on, because you shared something in common,” he said.

Persun said there were times when the jungle inhabitants worried about being evacuated by the city. In 2011, Jungle residents said they were considered a “problem” by the city. In August 2011, the City of Ithaca gave the American Red Cross of Tompkins County a “draft eviction notice,” requiring that residents living in the city-owned Sectors Two and Three of the Jungle to leave by September or get arrested. Jungle Sector One inhabitants were not warned, because they rested on land owned by Norfolk Southern Corp. Railroad.

In a meeting later that month, the city removed the deadline. No arrests were made and no one was evicted.
Guidi’s work means the city can take the Jungle off their agenda for the moment.

Ithaca Mayor Svante Myrick said he was glad that citizens had worked to make such a change.

“Both personally and professionally, I am thrilled,” he said. “I think that’s not an environment for anyone to live. I am glad that a committed group of private citizens were able to make this positive change.”

Gossa Tsegaye, assistant professor of television-radio at Ithaca College, has produced three documentaries on the Ithaca Jungle. Tsegaye spent months immersing himself in the Jungle community and researching for his documentaries. He said the people he saw were hopeful and adaptable.

“What stood out to me is the resilience of human beings,” he said. “People can survive no matter what the condition is. They cared for each other, they trusted each other. I think it was important to understand that they really loved each other.”

Persun smiles as he talks about his other friends from the Jungle — the cats. Cats that once belonged to Jungle residents peer from under the fallen tents and weather-beaten couches.

One of these cats is Meow Meow, whose black coat and green eyes have captured many Jungle hearts. Persun said she is known in the Jungle as the “mother of all cats.”

“When she would have a litter of kittens, we always got the first pick of them,” Persun said. “I had a great kitten. I called her Spirit. But she just disappeared. I don’t know what happened to her.”

Two years ago, Meow Meow’s owner hanged himself. Guidi said the man had killed himself because he was desperate to get out of the jungle.

Meow Meow’s owner was not the only person who died in the Jungle. Many deaths have been reported in the Jungle over the years — some suicides and some accidents.

The number of homeless persons using shelter in Tompkins County has decreased by nearly 50 percent since 2001, according to shelter usage data analyzed by the Human Services Coalition of Tompkins County. Myrick said homelessness is not a problem that can be solved by a single establishment.

“The private sector, nonprofits, government, none of us alone can solve this problem,” he said. “Only together can we solve it.”

Guidi is working with local rescue missions to build a 10-room supportive living home on Court Street to house inhabitants. But keeping the Jungle empty is the next and biggest challenge. In the summer, the jungle is usually home to 30 to 40 people. Guidi said he does not expect the Jungle to stay empty.

“As soon as the weather warms up, there’ll be people back in there,” he said.

Myrick said the city has long-term plans to keep the Jungle empty.

“We’d like to have housing for everyone, and we’d like to put that land to good productive use,” Myrick said.

Today, Persun works at the Ithaca Rescue Mission, where he runs the donation center — a job he said he loves. Persun pays Guidi a sum of money at the end of the month, whenever he can afford it. Guidi drives him to and from work for the moment, but Persun is working on getting a learner’s permit.

Though originally from Pennsylvania, Persun said Ithaca is his home — Jungle or otherwise. He said those who have a place to call home should not take what they have for granted.

Listen to a radio feature on the Jungle at https://soundcloud.com/92-wicb-ithaca/ithacas-jungle-is-empty.