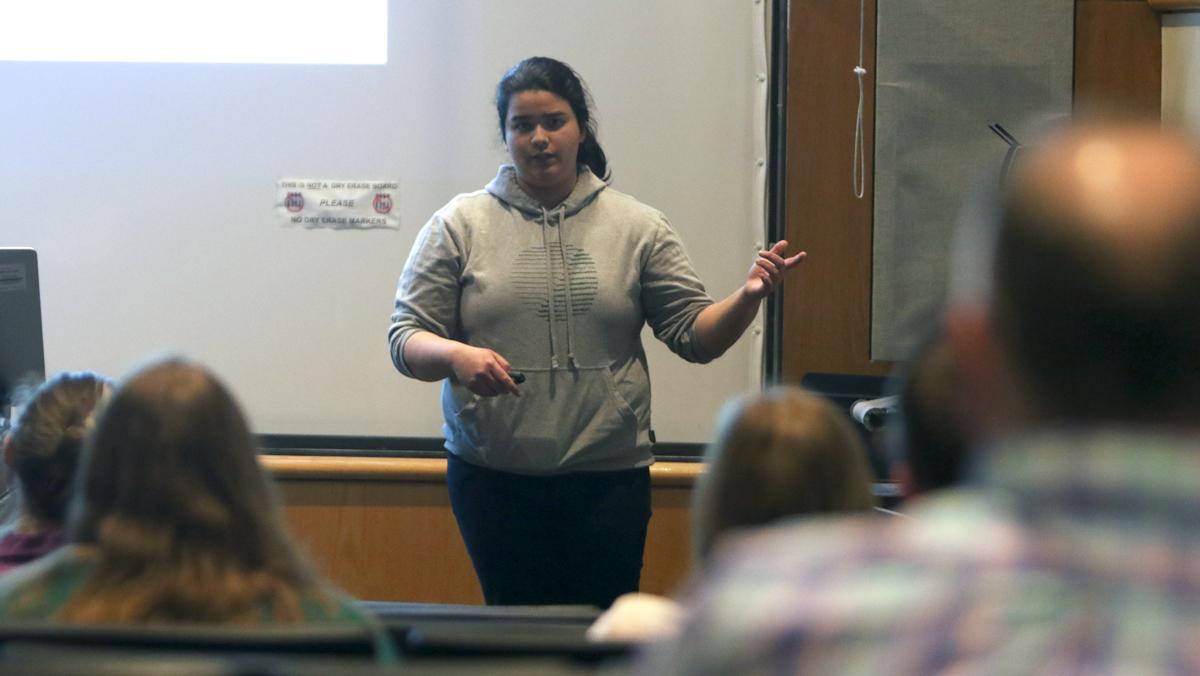 Junior Miranda Ella walked into the Center of Natural Sciences nervous about giving her presentation at the annual Biology Symposia. After weeks upon weeks of preparing, she presented her research on plant species in Puerto Rico to professors and students of the Ithaca College community.

Afterward, Ella said she felt grateful for the opportunity to gain valuable skills and experience in her field.

“As nervous as I was, it’s fun to let other people know what you’re doing,” Ella said.

Juniors presented their biology and chemistry research at the annual Biology Symposia May 1– 3. Approximately 40 people attended the event Tuesday afternoon when six students presented their research methods, results and conclusions. Some of the topics explored included invasive species in Puerto Rico, corticosterone levels and behavior in hamsters, and melanin as a survival method against solar ultraviolet radiation.

Susan Swensen Witherup, professor in the Department of Biology, said the symposia is a requirement for students in the department because it gives them valuable experience in the field and the important skill of communicating their research to faculty and other students. She said she believes one of the important aspects of being an exceptional scientist is understanding how to communicate your work to other people.

Junior Cara Hoefen presented her research titled “Effect of Prenatal Stress on Personality and Physiology in Siberian Dwarf Hamster Offspring” at the event. She said she wanted to research the topic because she has always liked hamsters and was interested in how maternal stress could affect a species. Her research found that stress levels do affect offspring of hamsters during the weaning period, post-birth.

Hoefen said she feels that the event is important for students in the field because it is a good way to the work that undergraduates are doing with fellow students and the community. She said she also felt that it was an excellent way to practice public speaking.

“It’s a really good way for those who want to go on and continue doing research type jobs in the future to practice and prepare for it,” Hoefen said.

Hoefen said doing research that did not always result in what she hypothesized, such as the hamsters not producing offspring, was an important skill for her to learn because obstacles in research will occur.

Ella also presented her research at the event and said she agrees that the event is important in developing and practicing future skills.

“It doesn’t really do you any good to do all this research when the common public doesn’t understand what you’re doing,” Ella said.

Ella’s presentation, titled “Quantifying Post-Disturbance Damage of Scaevola Plumieri and Scaevola taccada Using aerial Photographs,” was about her semester–long project about the effects of recent hurricanes and storms on the two species in Puerto Rico. Her research focused on assessing damage levels and recovery rates of the two plant species in Puerto Rico after Hurricane Maria.

Ella said she agreed with Hoefen that overcoming obstacles was an important learning curve. She said she had to figure out how she was going to get to Puerto Rico and how to finalize measures for her research.

Witherup said this particular event is something many big universities do not get to experience because of the amount of time and faculty involvement it requires. She said that several years ago, the department reviewed the curriculum and held a survey about the symposia with alumni, asking what the most important experience was to them as a biology major at the college. Witherup said the response was overwhelmingly the Biology Symposia because it gave them important, real–world experience with original data and public presentation.

“It really defines the kind of experience a student at a school like this can get compared to a larger university where that kind of faculty time is just not available,” she said.