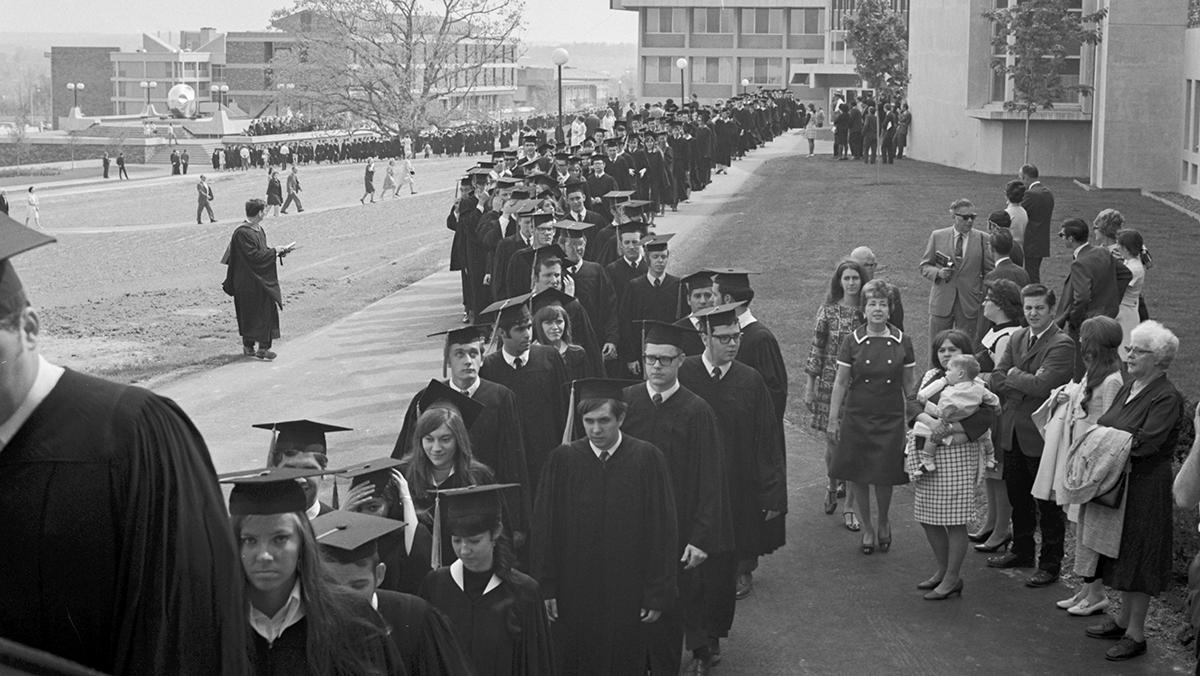 C. Hadley Smith/Ithaca College
The Class of 1969 walks toward the Hill Center for Commencement on May 17, 1969. Representation of low-income students among degree recipients has always been low.
By Kayla Dwyer — Editor in Chief
Published: April 26, 2017

The story of higher education in the United States is one of rapid rise and steady fall, with the only unchanging variable being the persistence of class inequality.

Even with the explosion in college attendance post–World War II — aided in part by the GI Bill of Rights, which granted veterans benefits that included tuition payments — access for low-income students has been consistently low while significant ground was gained in gender and ethnic diversity. Americans began to think of higher education as a public good in this period, and government funding followed suit. But the rapid expansion quickly outpaced fiscal support, and the public’s optimism toward opportunity waned. The shifting of the financial burden to families has systematically excluded those from the bottom quartile of income.

Sociologists theorize about why this might have happened. Sigal Alon in the American Sociological Review points to a mechanism called social closure, in which social groups seek to reap certain benefits or keep their privileges by controlling access to them, thereby excluding others. Some exclusionary methods include property barriers, such as rising tuition costs, and the “inflated use of academic qualifications” or standardized tests like the SAT.

Privileged groups can devote considerable resources to helping their children adapt to these requirements, investing in resources to improve test scores and promote college attendance, resulting in a polarization of resources based on class, Alon writes. Though class has always been an inhibitor for some in terms of accessing higher education, it was not always a disadvantage.

In the early 1800s, going to college was not expensive, but it also was not for everyone. Employers rarely required college degrees, so families had to weigh the potential cost of lost opportunities — losing children who could be working the farm or taking over the business — to college. College was useful for the elite and the clergy, and these institutions mainly focused on the liberal arts.

Special interests and vocationalism began to crop up in colleges in the latter half of the 19th century. Professional schools for agriculture, medicine and law developed, as the 1862 Morrill Land Grant Act allowed states to use money from the sale of public lands to build state colleges for these fields. A high school degree began to lose value compared to a college degree, but college-degree attainment wasn’t yet the universal goal — high school graduation rates were still low. 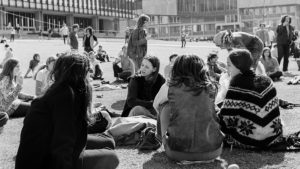 Students sit on the Academic Quad on April 8, 1970 — the year that marked the end of the “Tidal Wave” period of dramatic increases in college enrollment and demand. C. Hadley Smith/Ithaca College

After World War II and the passing of the GI Bill of Rights, higher education became one of the fastest-growing industries in the country as well as a ticket to the middle class. From 1947 to 2001, the number of students enrolling in college increased sevenfold. The SUNY system was established, for example, in 1948. Between 1955 and 1990, the number of institutions nationwide doubled. In the period between 1955 and 1970 — known as the “Tidal Wave” because of the swelling of enrollment and demand — spending per student increased by more than double the rate of the gross domestic product.

Many American families bought into this postwar expansionism. It was, by this time, well-established that a college degree meant higher status in society. The country was moving away from an industrial economy to one focused on services like health care, education and business — services requiring professional degrees. In 1947, about 40 percent of jobs in the U.S. were in goods-producing work like manufacturing and agriculture. But in 2011, this number had declined to less than 15 percent.

But the boom in attendance necessitated more planning on colleges’ parts to accommodate so many students, leading to a more complex bureaucracy and a booming testing industry. The advent of college ranking systems in the 1980s heightened competition and selectivity. Higher education continued to grow costlier, outpacing the GDP and inflation, and applications continued to climb while state appropriations to schools dropped off. The Reagan administration cut a billion dollars from Pell Grants and other federal grants, shifting the cost burden from taxpayers to bank loans. 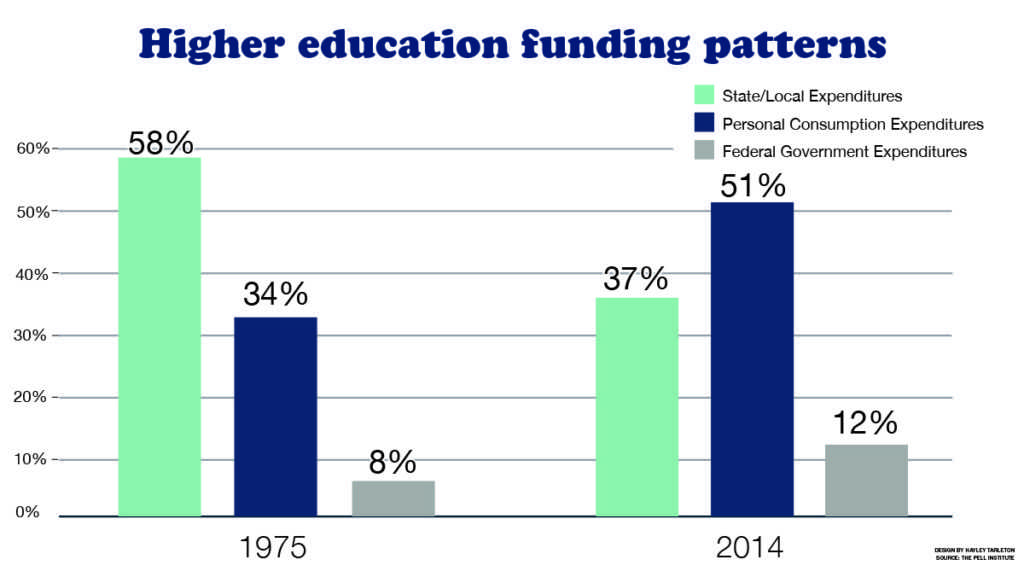 State and local governments covered 57 percent of public and private higher–education costs in 1977, but this dropped to 39 percent in 2012, according to the Pell Institute’s “Indicators of Higher Education Equity in the United States” report from 2016. Meanwhile, in those years, families have gone from covering 33 percent to 49 percent of the costs.

In this same period, the representation of the bottom 10 percent of the family income bracket among bachelor–degree recipients has hovered between 7 and 14 percent.

Carnevale, Anthony P. and Stephen J. Rose. “The Economy Goes to College: The Hidden Promise of Higher Education in the Post-Industrial Service Economy.” Georgetown University Center on Education and the Work Force.

Deresiewicz, William. Excellent Sheep: The Miseducation of the American Elite & the Way to a Meaningful Life. Simon and Schuster, 2014.

Eckel, Peter D. and Jacqueline E. King. “An Overview of Higher Education in the United States: Diversity, Access, and the Role of the Marketplace.” American Council on Education, 2004.

Lazerson, Marvin. “The Disappointments of Success: Higher Education After World War II.” The Annals of the American Academy of Political and Social Science, 1998.