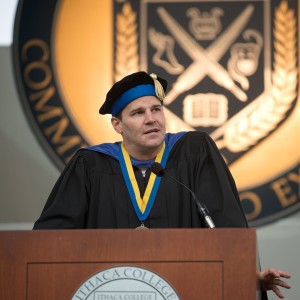 Sabrina Knight/The Ithacan
Members of the Class of 2013 sit at Butterfield Stadium during the Commencement ceremony Sunday. With over 2000 students, this year's class was the largest in the college's history.
By Noreyana Fernando — News Editor
Published: May 20, 2013

Cold winds and overcast skies did not dampen the energy in Butterfield Stadium on Sunday as Ithaca College’s Class of 2013 — the largest class in the college’s history — graduated at the college’s 118th Commencement ceremony. About 1,610 graduates and their guests attended the ceremony.

Not only was it the largest class, but officers of the Class of 2013 announced that the class also had a record number of donors to the senior class class gift, which amounted to $14,915. This is the largest amount ever raised by a senior class.

Tom Grape ’80, chairman of the board of trustees, delivered the salutation, followed by President Tom Rochon who introduced actor and Commencement speaker David Boreanaz ’91.

In 2001, the college’s Alumni Association honored Boreanaz with the Outstanding Young Alumni Award for achieving exceptional success in his profession.

Rochon said Boreanaz’s determination to make a name for himself was one of the reasons behind his success.

“Before David landed that job playing the vampire with a soul… David had to pay his dues,” Rochon said. “After earning his degree in cinema and photography from the Park School of Communications, David headed out to Hollywood along with a few of his classmates… where his roles included parking cars, painting houses, handing out towels at a sports club. But he persevered and soon found himself with actual acting jobs.”

Shelby McElrath ’13 said she thought the tone of the ceremony was lighthearted.

“Graduation can so easily be a boring tedious thing,” she said. “[But] all the speeches, they connected to one another. It was a very smooth, fun and light experience. It really fit with Ithaca.”

“It felt very relaxed, like a conversation you could have in a living room,” she said. “He really seemed to connect with the class and it felt like one of our peers was speaking to us.”

Reflecting on his own experiences, Boreanaz said it was important to work to achieve goals.

“You guys have to work, graduates,” he said. “You have to earn it. Earn it. No one is going to give you anything in this life. Earn it.”

Boreanaz said part of his work as an actor is telling other people’s stories, which he said helped him craft his own story and find his authentic self.

He also encouraged the graduating class to pursue an authentic existence.

“Four years ago, President Rochon invited you to find your authentic self,” he said. “Today, I challenge you to live it. Keep living it, keep loving it. Keep dancing with it.”

Senior class president Rachel Heiss ’13 acknowledged the large size of the Class of 2013, which she said led the college to undergo many changes.

“We are literally so big that the college transformed just for us, even building a brand new residence hall to commemorate our class — the Class of T13,” Heiss said.

Heiss encouraged her classmates to think about the moments that stand out from their four years at the college.

“All [the] obstacles and changes — the class registration, the housing, the branding — have made me realize that these were just small pieces of the larger picture, just elements of our overall experience at IC,” she said. “When we look back at our time here, are these the things we are going to remember? We probably won’t remember our internet frustrations in the library… I want you to think about what you will really remember.”

Ryan Sharpstene ’13 said the reality of graduating has yet to sink in.

“It’s surreal for sure, that I have graduated college now,” he said. “But I could not have asked for a better four years or a better day to cap off my experience at Ithaca College.

Rochon said he remembered when the graduating class arrived on the campus for the first time.

“You were our own Baby Boom generation,” Rochon said. “When the Fall 2009 semester started, you represented one third of all undergraduate students at IC… And you strode onto this campus with an unmistakable swagger.”

He said he sees a noticeable change in the graduates as they leave the college.

“Now you stride into the world as you once strode onto this campus — full of questions and doubts I am sure, but also full of the talent, energy and ambition that will enable you to tackle every challenge,” he said. “Please embrace that world. Revel in its challenges.”