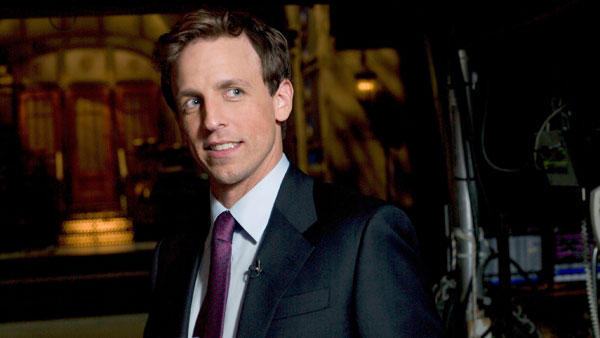 Ithaca College announced March 5 that “Late Night” host and comedian Seth Meyers will perform at 8 p.m. April 12 in the Athletics and Events Center.

Meyers’ performance will be open to the general public, and tickets will go on sale following spring break. Students will receive a discounted $15 ticket price, while the cost will be $30 for general seating and $40 for premium seating.

In addition to his performance, Meyers will also speak to students to kick off the mini-course “Weekend Update: Intersections of Politics and Comedy.” Eric Maguire, vice president of enrollment and communication, said the college reached out to Meyers because he would do more than just perform and leave.

“We wanted to bring in someone who would not just come to campus and put on a show,” Maguire said. “We wanted there to be a little further engagement, and for there to be an academic element.”

Bob Regan, director of Keshishoglou Center for Global Communications Innovation in the Roy H. Park School of Communications, will teach the mini-course, which will be open to students from all majors. The class will explore political satire and how it is used in TV. Regan said along with a Q-and-A session with Meyers, the weeklong course will also include presentations by guest speakers, who will be announced over the next few weeks.

Maguire said logistics for Meyers’ performance, including seating arrangements and ticket quantity, are still being figured out at this time.

Meyers is known for being the head writer of “Saturday Night Live” and the sole host of the segment “Weekend Update.”

Junior Phil Durnford said he is excited to see the college hosting a big-name performer.

“I think it’s great that they’re bringing someone like Seth Meyers here,” Durnford said. “I’d love to see him and hear what he has to say.”

Meyers’ visit comes as part of the accepted-students event “Ithaca Today,” which is hosted by the Office of Admissions. Prospective students attending “Ithaca Today” will be able to purchase tickets for the performance at the current student rate, according to the college’s website.

“Ithaca Today” has been held in the A&E Center for the past few years. Maguire said the idea to host a comedian like Meyers came about at last year’s “Ithaca Today” when he and the other organizers realized that a comedy performance would be ideal for the weekend’s social event.

Though the idea of hosting an event like this began as a part of “Ithaca Today,” Maguire said it has expanded into a campus-wide event. He said the Office of Admission has worked with partners across campus including the Office of the Campus Center and Events Services and the Park School.

The same weekend as Meyers’ performance, students will also be on campus for “An Inside Look,” an event for accepted African, Latino, Asian and Native American students. Maguire said the college is looking into the possibility of offering free tickets to students participating in “An Inside Look.”

Maguire said he hopes this performance will lead to more performances like this. He said this event may determine a future trend of the college hosting big-name performers.

“We have this setup that allows for a lot of possibilities,” Maguire said. “It will depend on how well this event is received and supported by our community.”