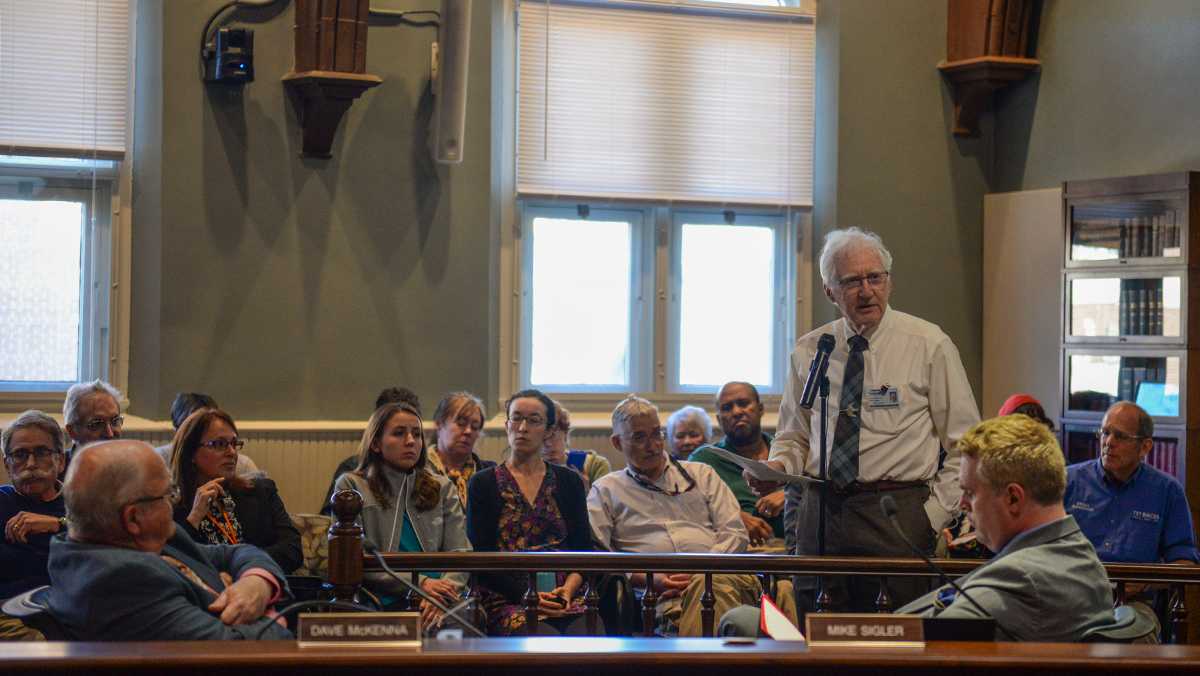 UPDATE: Tompkins County legislators voted May 2 to raise the age to purchase tobacco from 18 to 21. The local law passed with nine votes in favor to five against.

The Tompkins County Legislature held a public meeting April 18 to hear from locals about the bill and decided to hold a vote sometime in the following two weeks. The Tobacco 21 bill would not make it illegal for those under the age of 21 to consume or possess tobacco, only to purchase it. There is no grandfather clause written into the bill, meaning that the law would go into effect immediately for everyone if passed.

About 35 Tompkins County residents attended the meeting, either in support of or against the proposed bill, to speak to legislators and others in the room, providing opinions and facts they had prepared beforehand.

Community members brought several different perspectives to the table: One argument was that the age restriction would only increase the black market of cigarettes and lead to more unwanted behavior from rebellious underage teens. Another argument was that at 18, citizens are able to fight for their country, vote and go to jail, and therefore, should be able to purchase tobacco.

Ithaca resident Ellen Walsh said she did not know if making tobacco less accessible would be enough of a change.

“I don’t know that raising the age would be effective,” Walsh said. “I don’t think that a purchase age makes accessibility more difficult, but I think we should look in the direction of making it unacceptable to have tobacco on your person if you are younger than the age.”

“I’m in support because a 21-year purchase law would reduce smoking initiation in younger kids, who are the most vulnerable to a lifetime of addiction,” Reynolds said. “The health consequences of tobacco addiction are so severe that I believe we should be doing everything we can to prevent it.”

“Honestly, I understand why they want to do it,” Stiffler said. “I mean, you have to be 21 to drink and ruin your liver, so I guess you would have to be 21 to ruin your lungs too, in their eyes. However, I think it’ll be pointless. When I was like 14 or 15, kids from my school would have their older friends buy them cigarettes because they were too young for them, so this law would only make that system continue. I don’t think it’s going to help anything. In the end, people are going to do whatever they choose to do.”

Ted Schiele, coordinator of the Tobacco Free Tompkins project for the Tompkins County Health Department, said he thinks raising the purchasing age would help the community in two different ways. First, he said, doing so would make it more difficult for middle and high school students to obtain tobacco products because they would have to ask someone older to buy it for them. Schiele also said he believes it would change the social norm of 15– and 16-year–olds smoking cigarettes, delay the experimentation of tobacco by two or three years and, hopefully, decrease the number of people who ever even try it.

“There is some research which suggests that some students begin smoking or other tobacco use when they get to college,” Schiele said. “They are away from the oversight of their parents and looking for ways to fit into new social situations. Because this [bill] will make tobacco more difficult to get for 18– or 19-year–olds’, one can imagine that it could deter new college students from initiating tobacco use.”

Some students at Ithaca College feel that this is a right the county shouldn’t take away from them. Freshman Alex Spanos said he is frustrated by the potential bill because he feels his rights would be unfairly limited.

“It’s just annoying for me because I’m 18, and I’ve been able to buy tobacco,” Spanos said. “Now they want to be like, ‘No, you can’t anymore.’ At 18, you can die for your country, but you can’t smoke a cigarette? … It pisses me off so much. I understand the motivation, which is that they don’t want people smoking cigarettes, but people smoke underage anyway.”

Samantha Hillson, director of health promotion for the Tompkins County Health Department, said she believes Tobacco 21 could help reduce the number of young people who decide to try tobacco.

“Young people do not always think about actions today having repercussions in the future,” Hillson said. “Raising the minimum age makes public-health and ethical sense, and I hope the legislature votes in favor for these reasons.”

Research has shown that use and exposure to tobacco is a leading cause of cancer, and worldwide, there are about 6 million smoking-related deaths each year. Ithaca resident Deborah Mendes said that since about 10 percent of the Tompkins County youth, aged 12–15, smoke, it is important for the county to take action.

“This increases the likelihood that these youth will use and abuse other drugs and substances in the future,” Mendes said. “Tobacco 21 is one way that we can protect our youth today, as well as future generations.”

Less than two months after implementing a citywide smoking ban, the City of Ithaca Common Council is planning to expand the ban on The Commons to include the entire outdoor shopping mall.

Ithaca residents will now have to think twice before lighting a cigarette outdoors because of new smoking restrictions passed by the Ithaca Common Council last Wednesday.