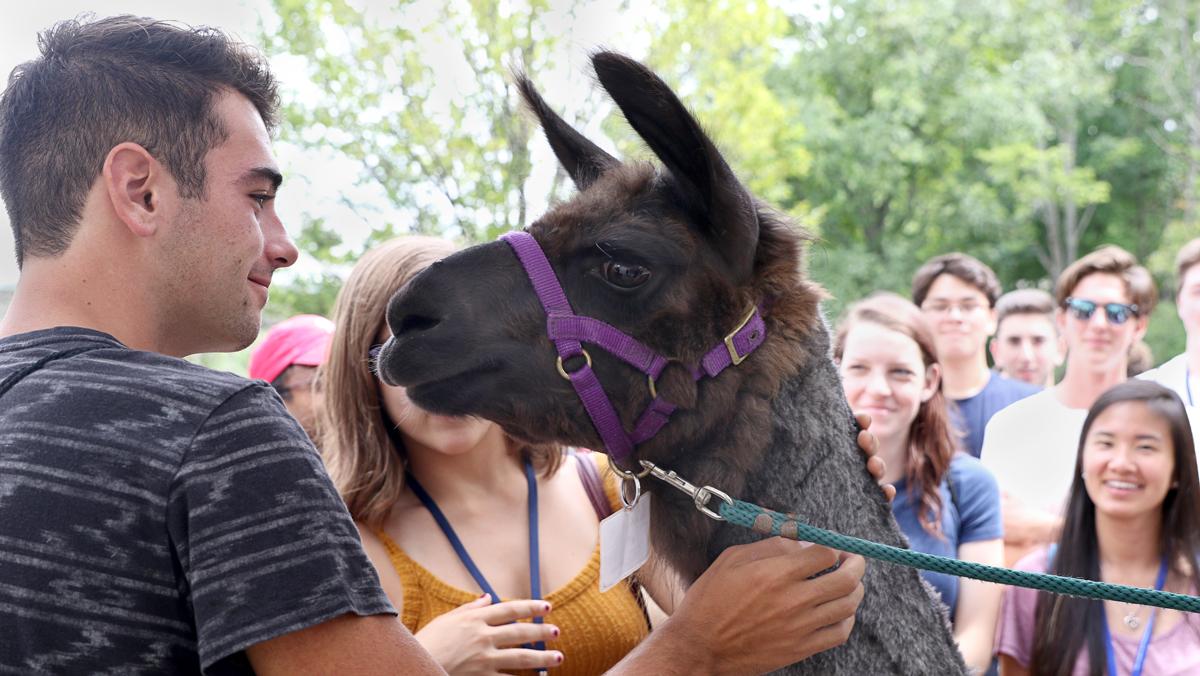 Therapy llamas are not a common subject for academic articles, but Ithaca College Library staff Kelly Hallisy and Ben Hogben wrote about their experience hosting a therapy llama in an article published in June.

The article, titled “We Invited a Llama to our Library and Here’s what Happened: Animal Assisted Activities at the Library,” was published in “Associates,” and it discusses the library’s experience holding animal-assisted activities (AAA) during exam week.

The library organizes a variety of de-stress events and activities for students during exam weeks including virtual reality experiences, coloring, and social events with the college’s President Shirley M. Collado, Hogben said. AAA are informal opportunities that provide motivational, educational and therapeutic benefits, according to Pet Partners, an organization that promotes animal assisted therapies, activities and education.

The library began organizing AAA in 2014 and has since hosted dogs from Cornell Companions, a pet visitation program sponsored by the College of Veterinary Medicine at Cornell University, and Therapy Dogs International, a volunteer organization dedicated to the registration of therapy dogs. Dogs from private pet owners have also attended AAA, Hogben said.

Late For Breakfast, often just called “Breakfast,” is a therapy llama from Cornell Companions who was first brought to Ithaca College during Fall 2018 final exam week. Breakfast has visited the college three times.

Hundreds of students come to visit Breakfast during her visits for the chance to pet, hug and take pictures with her, Hallisy said. Sophomore Elizabeth McCann said the library’s AAA benefitted her during exam week.

“It was a fun experience,” McCann said. “It was a distraction from all of my stress.”

Hogben said library staff from other colleges contacted him before Breakfast’s first visit to ask about the event.

Hallisy said they decided to write an article on AAA because many other libraries were asking how the event was organized and how effective it was. She said the event benefited the library as well as the students.

“I have seen so much more engagement and so much more awareness of the library as a whole on our own campus since we started doing this,” Hallisy said. “I kind of just wanted to communicate to other people that this is something you can do, and to give them the tools to be able to do it.”

Some students were critical of the event’s effectiveness in reducing stress and criticized the college on social media saying they would prefer to have more resources at the Center for Counseling and Psychological Services.

Junior Maddie Rohan was one of the students who expressed this concern on social media. She said she wishes the college would spend its time and resources on a greater variety of mental health services.

“I think it’s definitely important to try to have things that benefit all sorts of people,” Rohan said. “Going to pet some dogs is fun and all but it doesn’t help me get through my stress and my anxiety.”

Hallisy said these AAA do not cost the college anything because Cornell Companions is a volunteer program.

A 2018 study by Joann Jarolmen and Gunjan Patel at Kean University showed a correlation between AAA and decreased blood pressure in college students. The article, titled “The Effects of Animal-Assisted Activities on College Students Before and After a Final Exam” was published in the Journal of Creativity in Mental Health, and it examines the potential of AAA as an inexpensive resource for stress reduction.

Jarolmen said that therapy animals are especially effective with college students because they may be separated from their own animals at home.

“College students are usually homesick and a lot of times, they have pets they left behind, so when they come and see these wonderful, friendly, loving dogs, it’s just so stress-relieving,” Jarolmen said. “They lose the focus on the exam for the time that they are playing with the dogs.”

The library’s article has been well-received by other libraries, Hogben said, and they have been asked to publish it again in The Camelid Quarterly. Overall, the library has received positive feedback on the AAA and plans to continue to bring therapy animals to campus, Hallisy said.

Breakfast’s owner also owns a therapy camel and a therapy goose; however, the camel is not able to travel. Hallisy said they have not ruled out the possibility of inviting the goose to future events.

Disabilities are not always visible. Emotional and mental impairments could be harder to prove than physical disabilities.

Editorial: Under one woof