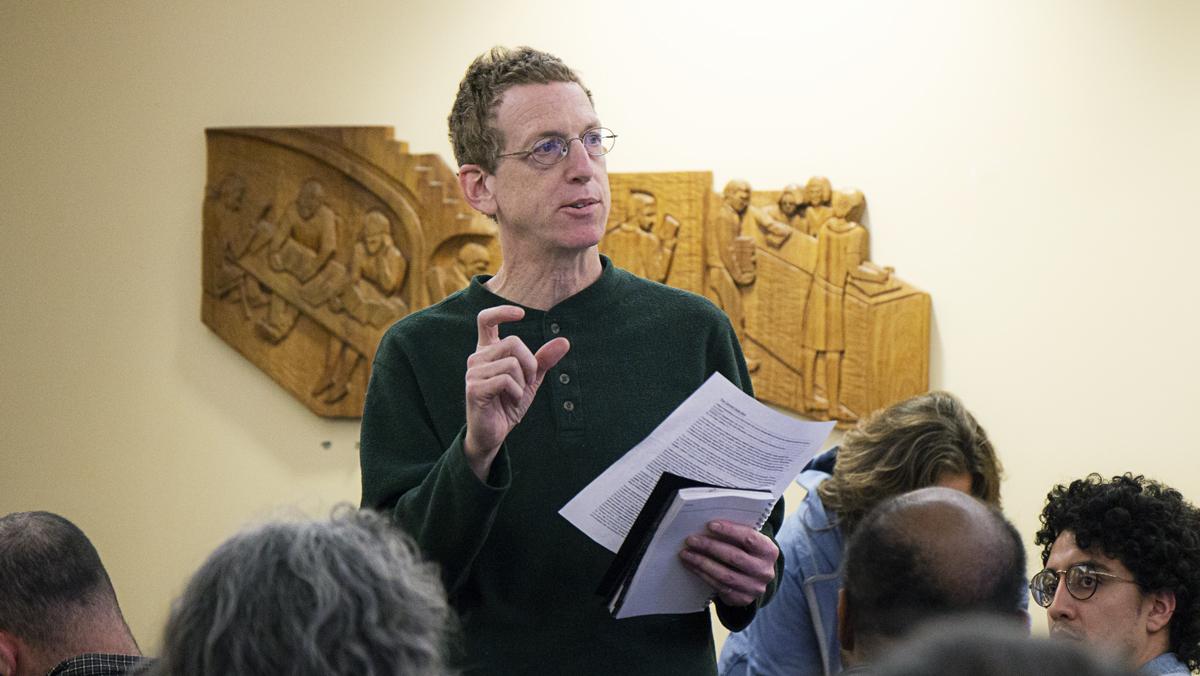 A forum was held March 25 at the Tompkins County Public Library to discuss community members’ concerns surrounding the effects of the Ithaca Tompkins Regional Airport expansion.

At the forum — which was co-sponsored by the Tompkins County Immigrant Rights Coalition Working Group (TCIRC W.G.), the Tompkins County Workers Center, the Ithaca chapter of the Democratic Socialists of America and the Multicultural Resource Center — local activists expressed concerns with how the county was funding the airport expansion, the environmental impact of the expansion and the presence of Customs and Border Protection (CBP) at the airport.

The airport expansion will allow the airport to accept international flights, and due to U.S. airport laws, this would require that a Customs and Border Protection agent be stationed at the airport. The groups that were in attendance are worried the CBP agent at the airport might coordinate with Immigration Customs Enforcement (ICE) and deport immigrants in Tompkins County. They are also concerned that the building process behind the expansion would disturb the surrounding environment.

The expansion was announced in June 2018, is expected to be completed by 2019 and is estimated to cost $24.5 million. More than half of the money for the airport expansion is being provided by a $200 million initiative by Gov. Andrew Cuomo to modernize New York state’s airports. Tompkins County received $14.2 million from the state to expand the airport. Tompkins County legislator Anne Koreman said the county hopes to cover the remaining $10.3 million with various grants. Koreman said the county has gotten additional grants to cover up to $20 million of the total $24.5 million needed to build the airport. Koreman said it is also possible that the airport will go over budget and may reach costs closer to $30 million.

More than 70 people — mostly residents of the town of Ithaca and eight Tompkins County legislators — attended the event. The event consisted of presentations from representatives of the event’s co-sponsors followed by an open dialogue with the audience.

Patricia Rodriguez, associate professor in the Department of Politics and Latin American studies coordinator, helped organize the event and said her group, TCIRC W.G., wants to stop the airport expansion because of environmental and immigration concerns and issues with the Memorandum of Understanding (MOU) between the county and the federal government. The MOU gives the CBP and the Department of Homeland Security (DHS) permission from the county to operate in the airport facility. It details some of the specifics of how the federal government is allowed to operate and also allows the legislature to cancel the MOU for any reason with a 90–day notice.

“The MOU between CBP and DHS and the county, does not do enough to limit the possible enforcement actions,” Rodriguez said. “It gives officers unfettered discretion and leaves open the possibility for data sharing.”

Koreman said she is reviewing the MOU with Rodriguez and a group called Showing Up for Racial Justice (SURJ) to go over what the MOU says to make sure it does not unfairly target immigrants in the county.

Russell Rickford, associate professor in the Department of History at Cornell University gave a presentation during the event and said instead of building an expansion to the airport, the county should be focusing their effort on supporting affordable housing projects and transportation.

Tompkins County legislator Shawna Black read out a statement written by Martha Robertson, chair of the legislature, who was out of town during the meeting, defending the airport expansion and describing the good that it will do for the county.

“The airport helps us keep and create new jobs by helping our local entrepreneurs establish new markets and bringing investors here,” Black said. “Efficient transportation is essential for our high–tech industries to remain competitive. With no federal highway into Tompkins County, our airport is essentially critical for national and global connections.”

Legislator Michael Sigler said the county will not be canceling the contract it has for the airport expansion, a situation that would require the county to return the $14.2 million given to them by the state and use county funds to reimburse the state for the money already used on the expansion.

Sigler said a Customs and Border Protections officer being stationed at the expanded airport is not as much of an issue as those at the meeting made it out to be.

“I don’t agree with [fellow legislators] on all the immigration issues at all,” Sigler said. “But to act like this is going to be some kind of ICE center where we’re going to be running out and arresting people is patently untrue.”

Mike Perry, a member of TCIRC W.G. who attended the event, said he did not feel that the legislators did a good job of answering many of the questions people had.

“We knew that some of them would show up and I was actually pretty satisfied with the number that came,” Perry said. “I feel like they were not really hearing some of our main concerns. But, I guess that’s what continued organizing is for.”

Tompkins County legislator Henry Granison said he thought the event was helpful toward creating a better dialogue with the county and the legislators.

“I went to listen, but other people spoke, and I think it was good to have that back and forth to talk to them directly, about issues and try to correct certain information,” Granison said. “At least, I saw that there was some unity, and I talked to someone afterwards. They thought there was something to gain from talking to each other.”