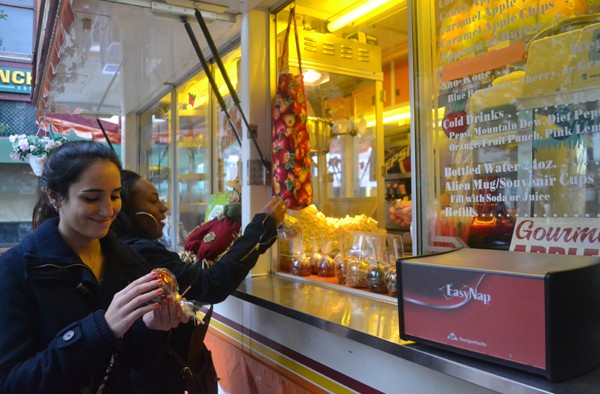 Despite a year of difficult harvests, the 30th Annual Downtown Ithaca Apple Harvest Festival brought in large crowds this weekend.

The festival, which ran from Friday to Sunday, featured more than 100 vendors, selling apple products, jewelry and crafts from the Finger Lakes region. However, despite the large turnout, a poor harvest season affected apple prices and quantity.

Dennis Hartley, co-owner of Little Tree Orchards in Newfield, N.Y., suffered a 70 percent loss in his apple crop this year. Hartley attributes the poor crop yield to higher temperatures last spring, followed by a cold spell in April that affected the flowers.

“We started out with 75-degree weather in March, [and] pretty much all of the fruit bloomed early, which set up the demise of their flowers,” he said. “We were losing blossoms on a regular basis from March on.”

The weather this summer also affected the size of surviving apples, making them smaller, Hartley said.

Kevin Panke, a Cornell graduate student who works in the Cornell Orchards, said the apples that survived did so because of their variety and geography.

“A lot of varieties you usually see here, there’s nothing. We lost it all,” he said. “But a lot of the stuff we have really good crops for; we have a lot of stellar apples out here.”

Vendors who sold other apple-related products at the festival like cider were also affected by the poor production.

John Loveland, co-owner of Allens Hill Farm in Bloomfield, N.Y., processes cider from local orchards. Loveland and his wife, Carolyn, use the cider to make all-natural sweeteners such as apple cider molasses and apple syrup. The farm owners had to pay more this year for apples to make their products.

“Basically the prices for apple cider doubled from last year,” he said.

The increase in production costs resulted in raised prices for the consumers at the Apple Harvest Festival, Loveland said.

Little Tree Orchards normally holds “U-Pick” orchard hours every day for the public from late July to late October. This year, however, the orchard only had enough produce to be open on weekends.

Apples were not the only local harvest affected. Lewis Ward, owner of Ward Maple Products, said that the season for harvesting maple syrup was cut almost in half by the unseasonably warm March weather.

“Everyone was all excited back in March when it turned 80 degrees, but that stopped our crop, so we made about half our crop for the year,” he said.

When temperatures reached 80 degrees for more than a week, maple trees came out of dormancy, producing sap that was no longer suitable for syrup making, Ward said.

Ward, whose stand has been in the same spot for 20 years, said many old customers came back this year, and business actually went up from last year.

“Weather makes a big difference here, and last year was cold and rainy,” he said.

Though there were issues with the harvests, Panke also said there was two-to-three times the number of people at the festival than in the previous three years he has worked.

“The people, they love the apples,” he said. “It might be the scarcity thing — they can’t find the apples that they like and we have them — but it’s pretty phenomenal. The response is great.”

Click here to watch a video about the poor apple season in upstate New York.