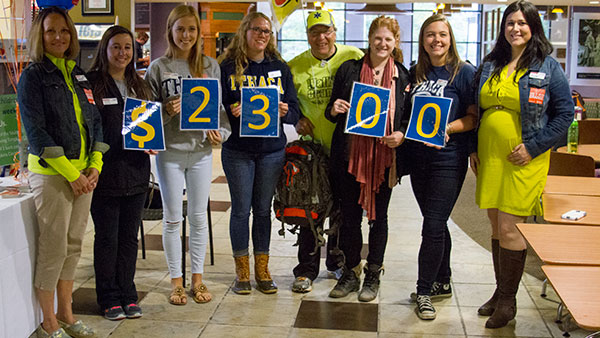 Casey Dennison
The Sodexo-Ithaca Dining Services team stands with Chris Allinger (center) with the amount to be donated to the Food Bank of the Southern Tier's BackPack program.
By Sara Kim — Online News Editor
Published: September 14, 2014

In recognition of September as Hunger Action Month, Ithaca College supported Q103.7 radio host Chris Allinger as he stopped by the college Sept. 12 for the last leg of his 100-mile walk around Tompkins County.

Allinger’s walk, called “Walkin’ the Country,” is an annual event he began in order to raise money for the Food Bank of the Southern Tier’s BackPack Program, which puts food into the backpacks of kids, Allinger said.

“They don’t give kids backpacks; they put food into the backpacks while other kids are at lunch so that nobody knows who gets it,” Allinger said. “And this could be the only food they have in that home for the whole weekend or [during school] holidays.”

For the third year in a row, Allinger said, he walked the county asking for donations from the people he encountered along the way. This year, he said he hopes to have raised more money than last year’s estimated $30,000 total.

“Each year is a little bit different, but it’s been great,” Allinger said. “I asked for $3 from every person I meet, and when we tally up all the money at night, we have fewer dollar bills than we have larger bills. People are generous.”

He said although he walks alone, there are some people who are generous enough to walk with him for a portion of the trek.

He said the walk lasted for one week, with his stop at the college being the last two hours of the walk.

Jaclyn Cheri, sustainability intern for Sodexo Ithaca Dining Services, said the dining services intern team spread the word around campus about Allinger’s arrival to IC Square because it was important for students to gather and cheer him on during the last leg of his walk.

“It was really cool because [Friday] was the last day, so when he stopped here we had to encourage him on the last leg of it,” Cheri said.

Departing from the college, Allinger, as well as six others, walked to Wegmans, his final destination.

Rebecca Sexton, marketing manager for Sodexo and one of the six people who walked with Allinger to Wegmans, said Sodexo works to raise money for its Stop Hunger campaign by bringing awareness to the Food Bank of the Southern Tier’s BackPack program. She said bringing Allinger to the college on his last day would be a great way to involve the Ithaca community.

“The Food Bank of the Southern Tier was an evident local community event that we could really tie into and have community support because people in Tompkins County want to give back to the county, so we sort of took charge of that,” Sexton said.

Sexton said Allinger’s arrival is the kick-off event for Sodexo’s donation drive, which runs through the fall and concludes with the Food Frenzy event.

Food Frenzy, held annually in October, allows students to sample fresh food and dining options while learning about childhood hunger in the community, according to Sodexo-Ithaca Dining Services.

Cheri, along with Sexton and the Sodexo organizers of the event, presented Allinger with a $2,300 check to donate to the BackPack program.

Sexton said the check was the money collected from members of the community.

Senior Mary DiLazzaro, president of the IC Culinary Arts Club, said the event helped shed light on to the fact that students take their meal plans for granted because not everyone has easily accessible food.

“So $3 can barely buy us a meal, but you can fill a backpack up with $3 worth of food and give it to kids,” DiLazzaro said.

“Our efforts are always trying to make more money for the BackPack program every year thanks to the community,” she said.