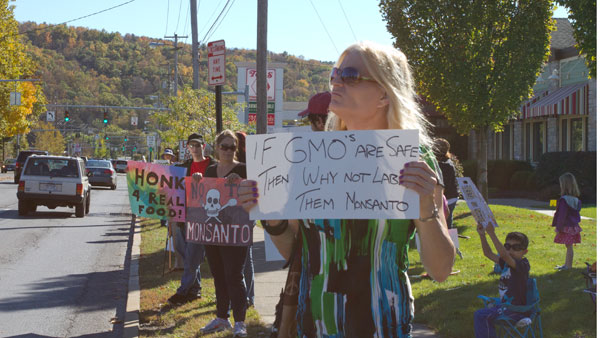 Noreyana Fernando/The Ithacan
Protesters gathered on Oct 12 across the street from Wegmans to call for the permanent boycott of all Genetically Modified Organisms.
By Noreyana Fernando — News Editor
Published: October 14, 2013

Nearly 40 protesters in Ithaca joined more than 400 cities across the globe in the worldwide March Against Monsanto rallies on Saturday, calling for the permanent boycott of genetically modified organisms and harmful agrochemicals in food.

Marches were scheduled to take place in nearly 50 countries and on six continents, just days before World Food Day on Oct. 16. In the U.S., 238 solidarity marches were slated to occur in 47 states. This was the second round of global marches this year. The first round took place May 25, and nearly 300 people attended.

Missouri-based Monsanto and its subsidiaries produce agricultural products such as genetically modified seeds and herbicides for farmers. The company has pledged to work with farmers from around the world to make agriculture more productive and sustainable, and it’s working to double yields in core crops by 2030.

However, protesters said the company’s pesticides and insecticides contaminate food consumed by humans.

Les Morrison, one of the protesters at the march, said as a result of unlabeled products, the public is not informed enough to make healthy food choices.

“You have to know if a factory that produces something has peanuts in their factory,” he said. “We don’t have to know if GMO is in anything. It’s not labeled. It does not have to be labeled. Why are we not given the choice to make healthy choices for ourselves?”

Protesters also spoke out against the Trans-Pacific Partnership Agreement, which is a free trade agreement currently being negotiated by nine countries, including the U.S. The agreement calls for the elimination of tariffs in the trade of goods and services and commits to promoting trade among the countries.

Ithaca local Ruth Williams, one of the organizers for March Against Monsanto Ithaca, said the agreement could impact the jobs market.

“The TPP would offshore millions of well-paying jobs, increasing unemployment — and we can’t afford that now,” she said. “TPP would decrease access to affordable medications, destroy our right to know what is in our food by repealing any proposed GMO labeling, and TPP would import foods that do not meet U.S. safety standards.”

Worldwide March Against Monsanto protests also welcomed Vietnam-war veterans and survivors of Agent Orange. Monsanto was one of nine government-contracted manufacturers of Agent Orange during the war. The U.S. military sprayed millions of gallons of Agent Orange and other herbicides on trees and vegetation during the Vietnam War. Concerns about the health effects from these chemicals continue decades later.

“I came out here for my children and my grandchildren and their future and the future of the world,” she said. “Monsanto is a monstrosity that has pretty much taken over the entire world of seeds, not to mention pesticides and insecticides, which are taken up by the plants we eat. Monsanto needs to be stopped.”