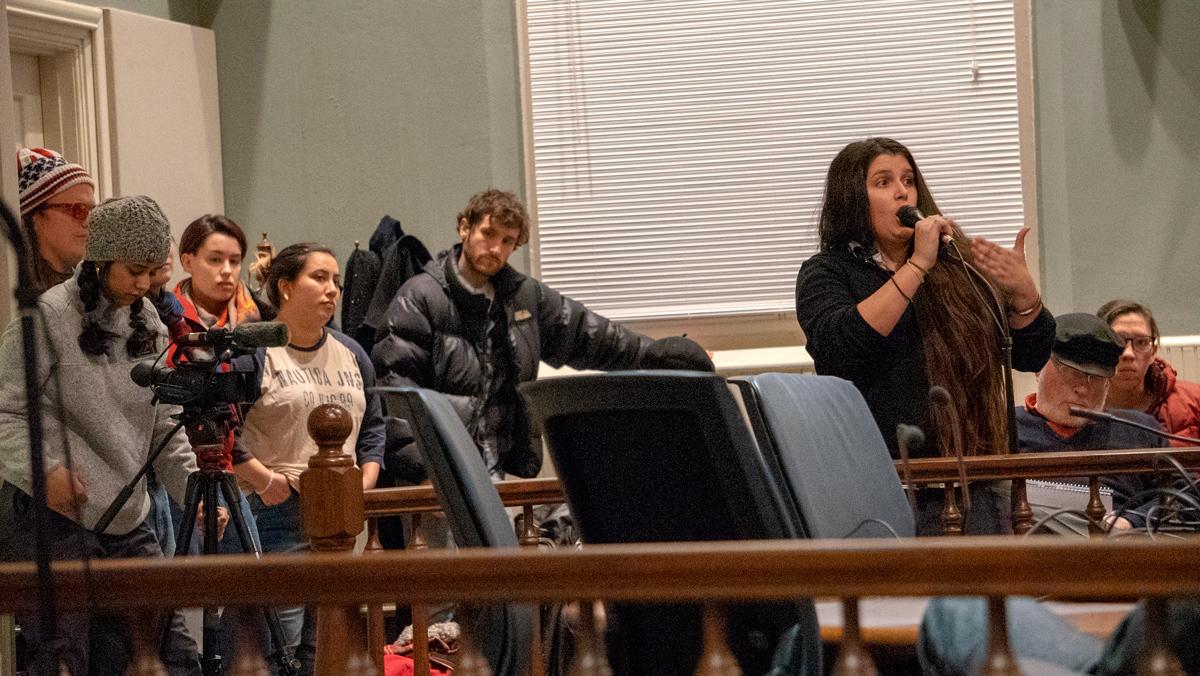 Sabrina Chang/The Ithacan
Local resident Stephanie Heslop comments on the airport expansion during the Tompkins County Legislature meeting Feb. 19. She was one of several activists to express her disapproval with the expansion.
By Ryan King — Assistant News Editor
Published: February 20, 2019

The legislature unanimously approved the expansion back in June 2018, accepting a $14.2 million Upstate Airport Development Grant it received from the state, with the understanding that the legislature would find funding for the rest of the $24 million project either from its budget or from other sources. Senate Minority Leader Chuck Schumer has recently called upon the Federal Aviation Administration to give a $10 million grant to help fund the rest of the project.

During the meeting, some of the activists said they felt that the new customs inspection station could lead to more U.S. Immigration and Customs Enforcement (ICE) raids in the area and that expanding the airport would only further climate change. Tompkins County is a sanctuary county, and the City of Ithaca is a sanctuary city, meaning that the municipal laws in those areas protect undocumented immigrants from deportation.

The expansion will nearly double the size of the Ithaca Tompkins Regional Airport, enable the airport to receive international flights, construct a federal customs inspection station and more. The project has been endorsed by prominent New York politicians, including Governor Andrew Cuomo and Schumer.

Some of the activists suggested that investing money in the airport would not serve the local Tompkins County community and would only serve the wealthier people. They suggested spending the funds in areas that are better suited toward the community, like busing and public transportation.

Local resident Amanda Kirchgessner said the airport money could have gone toward funding 400 new Second Wind Cottages for the homeless. She also said the airport expansion would be detrimental to the environment because it would increase carbon emissions.

“I’m here tonight to ask you who you serve,” she said. “Do you serve the billionaire in our community, or do you serve the people? There’s a billionaire who wants an airport expansion, and there’s a bunch of people that can’t even get on a bus anymore. So our priorities should be people.”

Many of the legislators were uneasy with some of the assertions the activists were making.

Martha Robertson, chair of the legislature, responded to some of the comments and said she supported their efforts against ICE but emphasized that ICE would not be coming into the county through the new customs station.

“You are preaching to the choir — we are committed to the protection of immigrants,” she said. “I want to encourage people to pay attention to the facts. … This is not the threat that you are led to believe it is.”

She added that the new customs facility would do nothing to increase ICE presence in the county.

Legislator Deborah Dawson also shot back at some of the claims and said the county legislature was not legally able to spend money toward housing or bus services between cities. She also said having a customs facility is very standard in airports and that not having one in the Ithaca airport could result in more carbon emissions for international flights.

“When you need to land in New York or Philadelphia to go through customs, you need to use more fuel,” she said. “Planes use way more fuel when taking off than they do at cruising altitudes.”

The airport expansion is expected to be completed by the end of 2019.