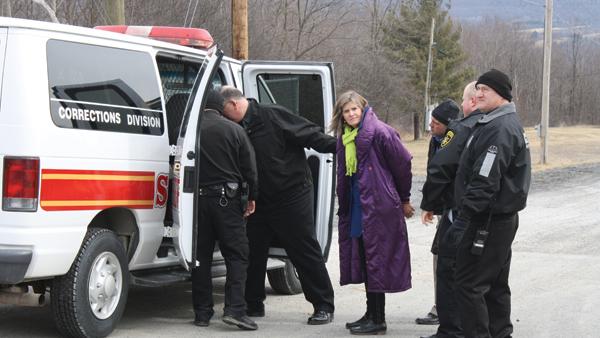 Courtesy of Emily Wilson
Sandra Steingraber, distinguished scholar in residence at Ithaca College, is taken into custody in Reading, N.Y., after protesting with 11 others against Inergy, LP, a natural gas storage and transportation facility located near Seneca Lake. All arrested were released with court dates.
By Kelsey O'Connor — Editor in Chief
Published: March 21, 2013

A dozen people — including two from Ithaca College — were arrested Monday morning after blockading a natural gas storage and transportation facility on Seneca Lake.

The demonstration was in front of Inergy Midstream, LP’s location in Watkins Glen. The company, which is based in Missouri, is an energy infrastructure and distribution company. Inergy purchased salt caverns from US Salt in 2008 and plans to develop liquefied petroleum gas storage. Protesters were opposing the company’s potential expansion.

Sandra Steingraber, distinguished scholar in residence at the college, and senior Katya Andersson were arrested along with 10 others who had linked arms and held a banner that read “Our Future is Unfractured, We Are Greater Than Dirty Inergy” in front of the Watkins Glen Inergy facility on Monday.

According to a press release from Our Future is Unfractured, a group dedicated to protesting Inergy, “the blockade joins a growing national movement to call attention to environmental injustices caused by unconventional and extreme fossil fuel extraction techniques, including Inergy’s hotly debated salt cavern gas storage facility proposed for Reading, N.Y.” Opponents of the facility have raised concerns about potential water pollution to Seneca Lake, which provides drinking water to more than 100,000 people.

Hydraulic fracturing, which is widely debated in upstate New York because of its location on the rich Marcellus Shale, is the process of natural gas extraction. The extraction process can use millions of gallons of water, sand and chemicals to break apart or “fracture” rock to release gas.

According to a poll released Wednesday by Quinnipiac University, among New York voters the scale has tipped toward opposition to fracking. Among all New York voters, 46 percent are opposed to fracking, while 39 percent are in favor. However, voters in upstate New York are still closely divided, with 44 percent in favor and 42 percent opposed.

Steingraber said it was her first experience with civil disobedience. She said she went to the protest with only two things in her pocket: her license and a picture of herself nine months pregnant, standing in front of Seneca Lake.

The intent of this company called Inergy from Kansas City, Missouri, to come in and use our land — our land that grows food, provides us water, is our home — for a storage depot for lethal gases that are fracked out of the ground somewhere else is part of a story about extreme energy and the intent of the world’s largest industry — the oil and gas industry — now that it’s run out of the easy-to-get fossil fuels, to do these surreal experiments, using our land as its proving grounds,” Steingraber said. “This is just one small but important battle, but it seemed like a good place to make a stand.”

By 11 a.m., 12 arrests were made on account of trespassing violations. By 12:46 p.m., all of the blockaders that were arrested were released with court dates spread across March and April.

Andersson grew up in Caroline, N.Y., and has been opposed to fracking for about four years. She said she had taken a hiatus on protesting the issue since being in college but felt it was time to become involved again.

“I’m continually reminded of why I was there and why I was doing what I did,” she said. “I don’t regret it for a second, because I just keep coming back to why this issue was a no brainer, because there’s nothing hypothetical about it.”

Steingraber said it was important to make a statement because the issue goes beyond just fracking to the infrastructure that makes it possible.

“If our system of democracy worked, then I wouldn’t have to do this, but our regulatory system around the infrastructure for fracking is really broken, unlike the decision for fracking itself, which has a public process involved,” she said.”

In a statement, Inergy responded that the safety of people and the environment were top priorities.

“The safety of our employees, neighbors and the environment is paramount in all of our projects. This project will store much needed propane, create jobs and improve energy affordability and reliability for hundreds of thousands of New York residents and businesses. Propane has been stored and transported safely in this area for decades.”

According to Inergy, the proposed Liquefied Petroleum Gas storage has received endorsements from several constituencies in upstate New York, including Donald Siegel, a hydrogeologist at Syracuse University. In a letter dated March 12, Siegel wrote to Department of Environmental Conservation Commissioner Joseph Martens to endorse the safety of the project.

“I can think of no better geological environment in New York State to store liquid gas than salt caverns filled with brine,” Siegel wrote. Further in the letter, he said the caverns “do not leak — after decades of use. Leaks can’t be catastrophic as some are saying, and even if they were … Seneca Lake would not be affected, given its enormous volume, quick replenishment time and mixing characteristics.”

New Yorkers have had eyes on their governor, Andrew Cuomo, to see what decision he will come to about allowing fracking in the state. To frack or not has been on the table for about five years in New York. According the Associated Press, Cuomo was on the verge of approving gas drilling in February but held off after discussions with Robert F. Kennedy Jr., an environmentalist and his former brother-in-law.

Later in the day Monday, a separate rally took place at the Watkins Glen Village Marina with about 150 people who were also protesting Inergy’s facility in Watkins Glen.

Ossont said he has protested environmental issues for many years but said he has never seen an issue of this magnitude. He also said he doesn’t want to see future generations having to deal with fracking’s impact on the land.

“The industry itself, as far as I’m concerned, in its exposure to me and my activism, has consistently lied and misled the public around the dangers,” Ossont said. “And the salt caverns in Watkins Glen are just a piece of the infrastructure that’s necessary for this industry to invade New York.”

During and preceding the rally, Andersson said a real sense of community emerged.

“This was people from all generations,” Andersson said. “People from all different walks of life and even political persuasions.”

Steingraber said a unifying theme of Monday was “If our own state government won’t defend us, we’ll have to defend ourselves.”