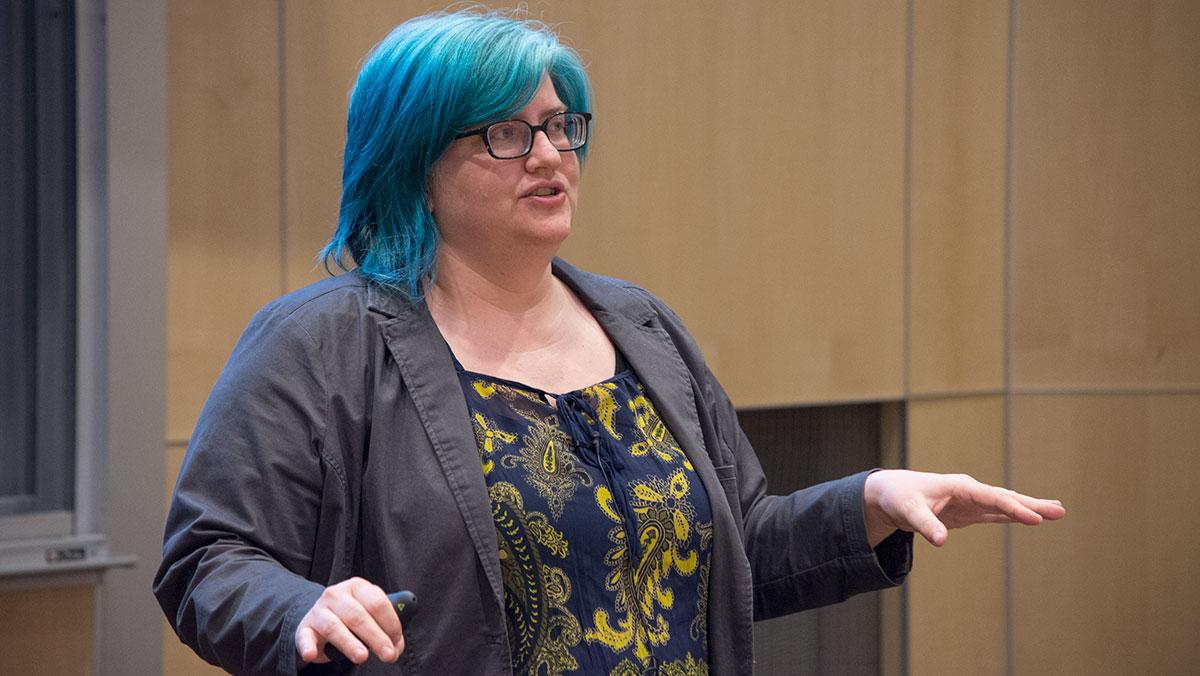 In front of an overcrowded room of Ithaca College and Cornell University students and community members April 20 in Textor Hall 101, mathematician Cathy O’Neil presented what she has learned about how data are used to manipulate how society functions, from firing teachers to jailing criminals.

Cathy O’Neil holds a doctorate in mathematics from Harvard University, and she started working on Wall Street a year before the 2008 recession as a quantitative financial analyst at a hedge fund, D.E. Shaw. After the crash, O’Neil became disillusioned with the financial business, and she decided to work with the Occupy Wall Street movement in 2011. She published a book in 2016 called “Weapons of Math Destruction: How Big Data Increases Inequality and Threatens Democracy,” which was the focus of her talk.

Before O’Neil came on to speak, however, junior Jessica Voutsinas was named this year’s C.P. Snow Scholar. The C.P. Snow Scholar Award is given to students who bridge the gap between the humanities and the sciences, according to the award’s website. Voutsinas has done work in using music to help patients with dementia and Alzheimer’s disease cope with their disease.

Something O’Neil repeated over the course of the talk was the criteria surrounding what she calls “weapons of math destruction” — that they are a widespread problem, use methods that are kept secret from those affected and have negative impacts. Throughout the talk, O’Neil pointed to various instances in society where mathematical algorithms are used to determine the fate of people’s jobs and lives, sometimes to disastrous effect.

One of the examples she gave was how data are used to fire teachers and the problems that arise from judging teachers’ success on specific grading systems, which is based on the expected scores that students will get on tests.

“My friend, who’s a principal, whose teachers were getting judged on this, were supposed to get a tenure decision yes or no based on these numbers.” O’Neil said. “And I said ‘Well, tell me the formula, and I’ll explain it to you,’ and she said, ‘Well, I asked my [Department of Education] contact for that, but they said, “It’s math. You wouldn’t understand it.”’ It is a weapon of math destruction because it was happening to a lot of teachers, secret, because she was never explained how it worked, destructive for the individual, but also destructive on the society level.”

Another example O’Neil gave was for something called recidivism risk, which is a scoring system that considers the likelihood that someone convicted of a crime will go back to jail after they are released. This scoring system is used to affect the number of years people are sentenced, based on a number of different facts, some of which O’Neil presented at her talk.

Hannah Keese, a Cornell graduate student from Australia studying math, who came to see O’Neil speak about her work, said that after hearing the talk, she feels greater hope that her own work will be useful.

“Sometimes it’s hard to see how what I’m doing is related to what’s going on in the world,” Keese said. “I do worry about how math is being used in different situations, like political, for example, in a way where people don’t really understand it and don’t use it in a way that is safe.”

Ian Woods, assistant professor of biology and a member of the committee that decided to bring O’Neil to speak at the college, said one of the reasons O’Neil was asked to speak was the kind of impact she is having in the world.

“Mainly because she is on the upswing in terms of impact in the world, her book just came out last year, she was on all these awards lists, and it was clear that she’s going places that are in line with the college’s message,” Woods said.

The Rev. George Coyne, former director of the Vatican Observatory in Tucson, Ariz., spoke Monday at Cornell University in a lecture titled “The Dance of the Fertile Universe: An Interplay of Science and Religion.”

Catholic astronomer speaks on relationship between science and religion

Anthony Aveni, professor of astronomy, anthropology and Native American studies at Colgate University, will be speaking at 7 p.m. April 10 about his end of world theories.

Guest speaker to give lecture on end of world theories