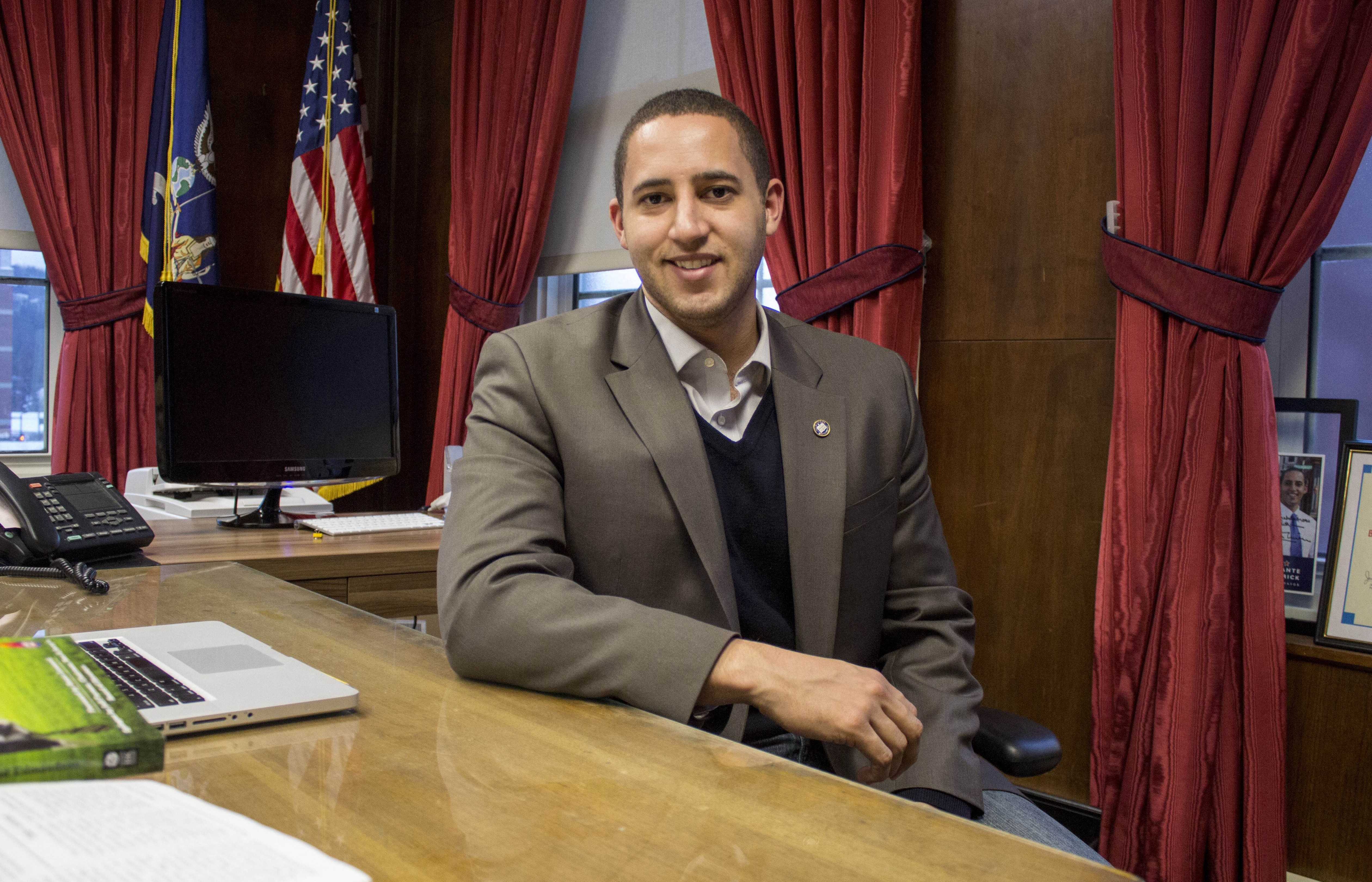 Mayor Svante Myrick returned to Ithaca last week after participating in the White House Mayor’s Manufacturing Summit. Nearly 20 mayors from across the U.S. attended the Dec. 5 summit to meet with other local government leaders and share their concerns and ideas for manufacturing progress in their local communities.

Top officials in the Obama administration attended the summit. Some notable officials who were present included Secretary of Transportation Anthony Foxx; Valerie Jarrett, senior adviser to President Obama; and Penny Pritzker, member of the president’s Economic Recovery Advisory Board.

News Editor Noreyana Fernando sat down with Myrick to discuss common concerns among mayors, Ithaca’s $10 million grant application to improve the local transportation system and why the City of Ithaca stood out at the summit.

Noreyana Fernando: How did you come to be a part of this summit?

Svante Myrick: I got an email from the White House, and they said we are hosting a summit on manufacturing. First I thought it was a general invitation. There were a lot of things on my schedule that week, so I actually declined the invitation. Then we got a call from the White House saying, “I don’t think you understand. There are only going to be a dozen other mayors there. We want you, and Ithaca specifically, because of your focus on clean manufacturing, high-tech manufacturing, biomedical engineering.” … They wanted a fresh perspective, so they invited Ithaca specifically.

NF: What were some of the common concerns among the mayors?

SM: Common concerns were transportation and infrastructure. No matter where you are in the country, the ability to get employees to their employers, to get customers to the products and to get the products out of the city to the customers, was huge. So everybody wanted to see from the federal government, more investments in rail, both passenger rail and freight; investments in highways; and investments in airports.

The second thing that would help is a contamination pollution remediation, cleaning up old sites of contamination so that real estate can be put back into productive purpose. Every city was struggling with that.

The third thing that I heard most from the other mayors is workforce development, making sure that the people who are growing up in our communities have the skills they need to compete for the jobs that are coming down the line.

NF: Given Ithaca’s unusually low rate of unemployment, did the city stand out at the summit?

SM: Yes, for sure. In a way, it was good because it was almost something to brag about. But also in a way, we are dealing with such completely different challenges. How does a city like Flint, Mich. give Ithaca, N.Y., advice, and how does a city like Ithaca give Flint advice? There were some things we had in common … but there were also just different challenges in different places and different strengths. We were focused on working with Ithaca College, Cornell [University] and [Tompkins Cortland Community College] to expand economic opportunities related to institutions of higher education. There, they are focused on how they can seize a larger part of the supply chain for automobile manufacturing.

NF: What were some of the other highlights of the summit?

SM: The highlights were being able to hear from and being able to give our opinions to some of the top advisers to President Obama. The president himself wasn’t able to make it there. I don’t know if he was ever supposed to. They never really tell you. But his Secretary of Transportation Anthony Foxx was there, which was incredibly important for us because we got an almost $5 million grant from the Department of Transportation last year. We are applying for a $10 million grant for next year. So being able to get in front of him, share our ideas on how investments in transportation can generate economic development, was a great opportunity.

NF: Tell me more about the application for a $10 million grant for next year.

SM: That is $10 million dollars in the TIGER grant. TIGER is short for Transportation Investment Generating Economic Recovery. It’s a highly competitive pool. They give out $500 million each year. They get about $4 billion worth of applications, so they have to pare that down. They only give out 50 awards, so it’s very tough.

NF: What will the city do if it gets the grant?

SM: We are going to be able to invest in things like bike sharing, bus rapid transit, which is basically high-tech upgrades to our system to make them more accessible to riders. This would be done with things like high-tech kiosks at bus stops, letting riders know what bus routes are coming and when. Those things can actually communicate to a GPS in the bus that also communicates with your phone so you know where the bus is. Also, investments to purchase more buses, possibly to run more routes and to rebuild some of our key roads like Stewart Avenue and College Avenue.

NF: Do you have any plans to attend more events or initiatives in Washington, D.C.?

SM: Yes, D.C. and Albany. We are here at the local level. So much of the work we do relies on support from the state government and the federal government. The same thing that’s true here is that the squeaky wheel gets the grease. In New York state and in the United States of America, the same thing is true. I want to try to be as squeaky as I can and see if we can get some grease.