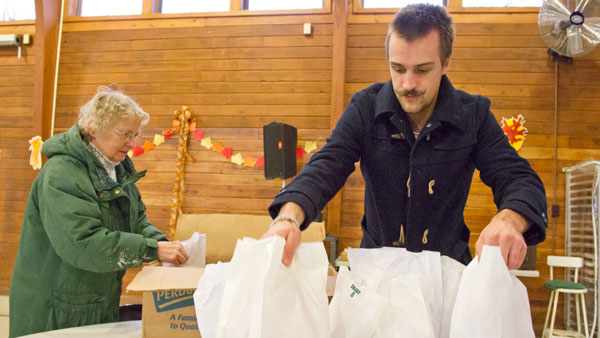 Sophomore Shawn Davis was seated at a table next to the Towers Dining Hall “In the Bag” station, when a friend walked up and gave him a low five and an extra paper-bag lunch.

With this, Davis now had a total of seven In the Bag food bags from the first hour he was sitting there on the morning of Nov. 13, about two weeks before Thanksgiving.

Each weekday morning since Nov. 4, Davis has been sitting by In the Bag — one of the college’s services that provides cold lunch items to go, similar to the Campus Center “Grab and Go” station, — with an empty box, encouraging students waiting in line to donate a meal swipe to the Salvation Army in an effort he calls “Grab and Give.”

One card swipe at the Towers station allots a student one bag to fill with a cold sandwich or salad, fruit, cup of soup, drink, bag of chips and two cookies. Each day, a volunteer driver has accompanied Davis to deliver his collection of bags, filled with only the cold, pre-wrapped items, to the Salvation Army Worship and Service Center in the City of Ithaca.

The Salvation Army, located on North Albany Street, has a food-distribution program that runs from 1:30–3 p.m. Monday through Friday. It accepts food donations, including the In-the-Bag and Grab-and-Go bags, anytime during the week for the volunteers to sort through and distribute.

During the first week of the initiative, Davis received a total of about 60 bagged lunches in donations, averaging about 10 to 15 bags per day. As of Nov. 20, Davis had donated more than 120 lunch bags.

The Sunday before the beginning of Grab and Give, Davis said, he volunteered to cook and serve at the Salvation Army’s Our Brothers and Sisters Table, a weekend community-feeding program.

“I have seen the demand for these meals,” he said. “There is a place for this food to be going. It’s not some mystery box.”

Major Barbara Carvill, an administrator at the Salvation Army, said the bags are a helpful addition to their food pantry, especially with the approaching holiday season, which brings in about 350 families each week. People from different socioeconomic backgrounds — homelessness, residence at the American Red Cross, those who make minimum wage, etc. — come alone or with families in need of meals daily, she said.

The idea of Grab and Give came to Davis during an ongoing conversation about privilege in the weekly meetings of Brothers 4 Brothers, a club for men to meet and discuss political, social, communal and academic concerns that affect them. While the Grab and Give movement is not sponsored by or run through the club, the members have supported the cause, Davis said.

Davis said he sees the movement as a way to take advantage of what students are paying for by sharing their privileges, guaranteed meals on campus, with those in the community who are less fortunate, especially with the holiday season approaching.

Currently, Ithaca College requires that all students living on campus, except for those in Garden and Circle apartments, purchase a meal plan. Davis said part of his inspiration for Grab and Give was out of frustration from not being able to drop his meal plan, which he discovered during a conversation with Jeff Scott, general manager of Dining Services.

“As soon as I hear someone tell me not to question something, it just sets off something in the back of my head where it’s like, ‘All right, well that needs to change,’” Davis said.

Davis said he thinks students should have the option to apply that money toward buying and preparing their own meals, rather than buying a meal plan.

In South Africa, where Davis lived until he was seven years old, his family struggled with not knowing where their next meal might come from, he said. This instability, Davis said, has affected and continues to affect his grandmother and extended family who still live there.

“Even when you have privilege in South Africa, you can’t hope that it’ll be there tomorrow,” Davis said. “Privilege is more fluid and subject to change than any of us would like to think.”

Davis’ roommate, sophomore Musashi Osaki, said he did not know ahead of time about Davis’ plans to donate the food, but he wasn’t surprised to find out.

“He’s one of the only people I know who will take action and is passionate about the things he cares about,” Osaki said.

In thinking about his own struggles and those of his Brothers, it is his drive to give back that keeps Davis returning to the same location each week day.

Davis said he chose to sit by In the Bag in the Towers because of the more communal atmosphere and convenient seating area where he can be visible.

“It takes so little for people to open their eyes to see that something different is happening,” he said. “As soon as things start deviating from that prescribed little box of what’s normal, people start asking questions.”

Davis has been getting the word out to the campus through Facebook and airtime on the college’s WICB radio station. Facebook is the medium through which his friend, sophomore Spencer Carr, heard about Davis’ initiative and volunteered to be a driver.

“It’s one thing to feel passionate about something,” Carr said. “It’s another thing to actually do something about it.”

Davis said even Ithaca College Dining Services employees have been showing their support. The first swipe from an In the Bag student employee was on the second day of the initiative. Meanwhile, non-student employees have willingly directed customers to where Davis usually sits. Davis said the only opinion he has not heard is that of the college administration.

“We’ve made our move as students, and we’re just waiting on them,” Davis said. “I think they’re in a tricky position to respond negatively towards this because they’re already making so much money off of us.”

While Scott did not comment on Davis’ initiative, he said Sodexo’s support for hunger programs has appeal on campus. Sodexo partners with student organizations such as Stop Wasting Ithaca’s Food Today and Food for Thought to provide staff support with organization and transportation for donating food. Scott said the efforts of these groups have encouraged students today to be less wasteful than in the past.

“We’ve operationally taken a little bit more waste out of our system,” he said. “When we know there’s going to be some waste, partnering with students like SWIFT is great.”

Senior Megan Strouse, president of SWIFT, said the group works directly with dining-hall staff to repackage the meals each week. The club’s adviser is Brandon Innerst, service manager at the Towers Dining Hall.

“I think [Grab and Give] is a great idea, and it’s something I hadn’t thought of,” Strouse said. “Maybe we should work together.”

Scott said, with some years of experience behind them, Dining Services is able to predict fairly accurately how much food to make each day based on how many students visit each dining hall in order to produce less waste.

A similar technique is applied to In the Bag and Grab and Go, where about 350 students visit at the Towers location and 700 at the Campus Center location daily, he said.

Meanwhile, Davis said Grab and Give is an example of a self-initiated action that brings about change, and it is easy for students to participate or take a similar initiative.

For now, Davis said his initiative stands as an unofficial, low-key project.

“At the end of the day, what I choose to do with the food I purchased is my decision,” he said. “It’s your decision.”