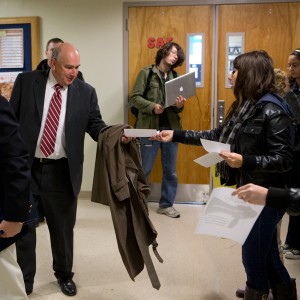 Sabrina Knight/The Ithacan
From left, seniors Mariana Garces and Ava Carneli sit in the hallway on the third floor of Phillips Hall waiting for a meeting of the board of trustees to be let out.
By Ithacan Staff
Published: October 12, 2012

After a peaceful protest Friday against the new media policy at Ithaca College, students and faculty dispersed.

At about 11 a.m., students marched to the Peggy Ryan Williams building for a “sit-in”protest and later relocated to Free Speech Rock by Campus Center. To be more visible to the board of trustees, students and faculty lined the corridor of the third floor of Campus Center while they met in the building.

Demonstrators chanted, “Board of trustees, keep the press free!” and “Don’t oppress the student press!” They sent around a petition and handed out fliers to board of trustee members as they walked out of the meeting at 12:15 p.m. President Tom Rochon was not in the Taughannock Falls Conference Room at the time, Molly Israel, director of communication in marketing communications, said. He was in another meeting in a different location on campus.

Students organized the demonstration to protest the new media policy, effective Oct. 1, that requires all student media to go through the office of media relations to contact administrators, deans, assistant deans and directors regarding stories about the college’s policies and developments.

About 50 students and some faculty were part of the protest.

Senior Brennin Cummings, who helped organize the event, said during the protest that she hopes the demonstration sent a message to the board of trustees.

“Students are here in this number to show how important it is to [them] and our media organizations,” Cummings said.

Jason Tucker, a lecturer in the department of writing, who has a journalism background, said he has concerns about the policy.

“I do believe that [this policy] can at worst, slow down the process of finding information and at worst provide a mechanism to control and limit the kind and quality of information that student journalists are able to get,” Tucker said.

Michael Twomey, a Dana professor in the department of English, said he supports the protest and hopes the president will respond to the community response.

“I hope that by the end of the day, at least they will be able to get a chance to hear from the president that he has heard them, that he is going to consider their request to repeal the policy,” Twomey said.

Senior Ayla Ferrone, an organizer of the event, said the protest was organized because student voices weren’t being heard.

“We don’t want it to be seen as an attack at all,” Ferrone said. “We want it to be seen as us voicing our opinion. But we are not targeting the administration personally. We are not targeting President Rochon or Dave Maley personally. We are targeting the policy; it is an answer to a problem that doesn’t exist and we don’t think that it’s fair for them to hinder us when we really haven’t done anything wrong.”