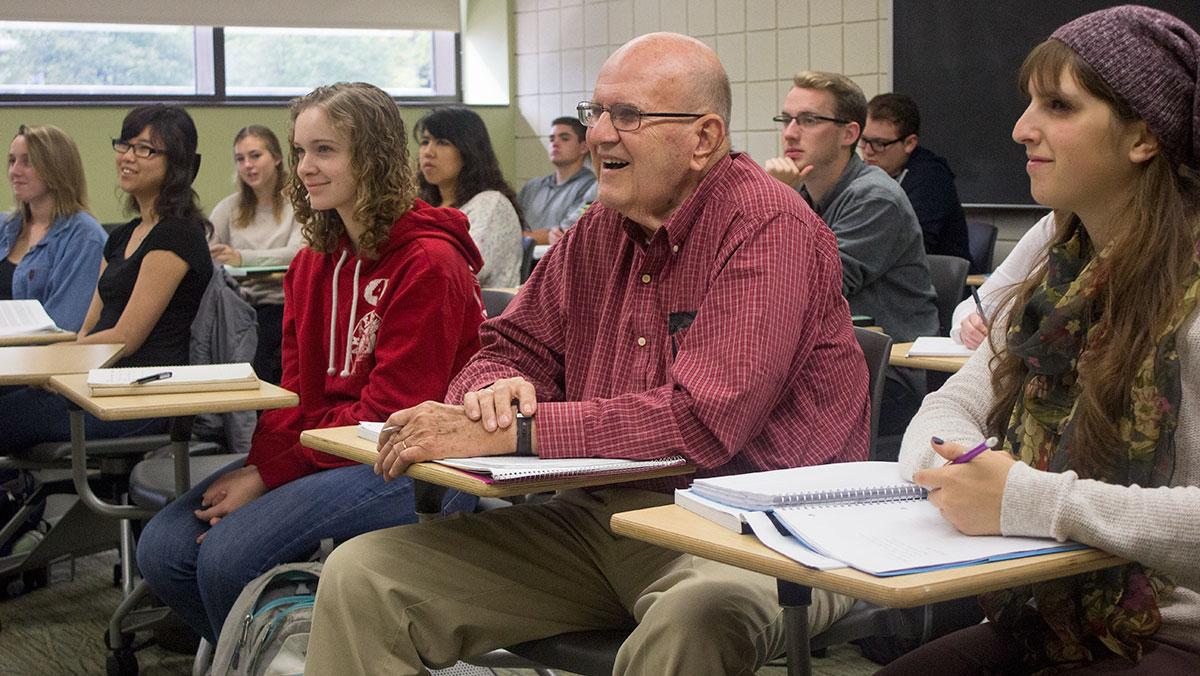 Karielle Williams/ The Ithacan
During the two years Bob McCune has been at Longview, he has also audited three classes at Ithaca College.
By Melanie De Lima — Contributing Writer
Published: September 23, 2015

Every morning, Bob McCune, 86, drinks coffee made by his wife, Alice McCune. After he’s done, he checks his assignments on Sakai and gets ready to drive to campus and attend his Ideas and Ideologies class in Williams Hall at Ithaca College.

At his home in Longview, he has his own self-made stained glass art hung around the living room and his doctorate degree in his office. He checks on Alice McCune’s garden on the patio before catching up on his readings for the next class. The former pastor is one of the nearly 10 senior citizens who audit courses each semester thanks to the partnership between the college and Longview, a retirement home. Bob McCune said he enjoys his classes at the college.

“They’re all a completely new area, and I’m learning a lot and having a great time. It’s just a matter of joy. I love getting to know people,” he said. “It’s helped me to get a perspective on aging, and it’s helped me better know how to cope with aging.”

The college created a partnership with Longview in the 1990s. Formerly known as Ithacare, the nonprofit housing community for older residents approached the college with an idea of strengthening ties by creating a joint approach involving intergenerational programming and sharing services in a new building.

During the two years Bob McCune has been at Longview, he has also audited two other classes: Bioethics and The Journey of Aging.

Christine Pogorzala, Ithaca College/Longview partnership coordinator and aging studies professor, said the program is managed through the Gerontology Institute and offers a variety of academic and social programs. Besides auditing courses, residents can also take shuttles to and from campus and engage in weekly activities at Longview, such as: Monday Night Bingo, Quilter’s Dream Quilting Group, Brain Builders & Baking, Scattergories with IC Students and more. Residents can also attend lectures from the college’s gerontology department and attend presentations by both the School of Music and the Department of Theatre Arts.

Around 300 students work at Longview as volunteers, fieldworkers or work–study employees as part of the partnership as well.

Senior Christopher Friedlander volunteered at Longview through his fieldwork class junior year and still volunteers as a member of the Quilting Club along with six other female residents.

“I feel like they’re very secluded there and get very bored,” Friedlander said. “It’s good to bridge that gap between the generations because people tend to stereotype older people, but they’re probably the funniest women I’ve ever talked to.”

“Most of the time the older facilities are people with their heads in their chest sitting in wheelchairs, which is very discouraging,” Bob McCune said. “I think having the students here keeps this place kind of lively.”

Raised in Pittsburgh during the ’40s, Bob McCune was one year too young to go to war during World War II. However, he served as an air raid warden’s messenger, knocking on doors to warn people to cover their windows to emulate blackouts and limit the possibility of bombings.

After graduating high school in 1946, he started college as a business administration major at Allegheny College in Meadville, Pennsylvania. However, he realized his calling was to help and serve others.

“I was in a class where they showed us how we had to manipulate things so that we would be sure to get the maximum labor out of people with the minimum amount of expenses,” Bob McCune said. “I realized I didn’t want to spend my life doing that — I wanted to help people, not exploit them.”

During his job at a summer camp for economically disadvantaged children in Epworth Woods in Butler County, Pennsylvania, he met and fell in love with Alice McCune.

“I was late and came into this hall where this beautiful woman was talking to the staff and giving instructions, and that’s how I fell in love,” Bob McCune said.

Alice McCune went on to be head girls’ counselor, and Bob McCune became camp manager that same summer. One year later, they were engaged.

After their second summer at the camp and Alice McCune’s graduation from The College of Wooster in Ohio, they got married June 30, 1951, and drove up the east coast to Ballardvale, Massachusetts, so he could become a pastor at a Methodist church.

“That experience taught us so much,” Alice McCune said. “We learned so much about each other, and once in the seminary I was so admired by his good leadership.”

In 1953, after seminary, Bob McCune and Alice McCune were sent to the small town of Truxton, New York, near Cortland where they lived for five years and had their first child, the eldest of four. They continued to be assigned to different areas by the bishops or superintendents of the church, mostly around central New York. Over the years, he left an impact in many places, his son David McCune said.

“My dad was a bit of a rock star in the Methodist church for his style of leadership,” David McCune said. “He was a real visionary and did a lot of good things for the people.”

After he retired in 1994 he joined a group called NOMADS, which travels across the country to provide volunteer labor to areas in need. He was in the group for 13 years.

Now at Longview, Bob and Alice McCune both say they have been driven to serve those in need and will never grow out of that.

“We’ve learned a precious lesson in life: You never can give too much,” Bob McCune said. “We are really blessed.”

An earlier version of this story misstated Bob McCune’s age and the official description of Longview. It has been corrected.