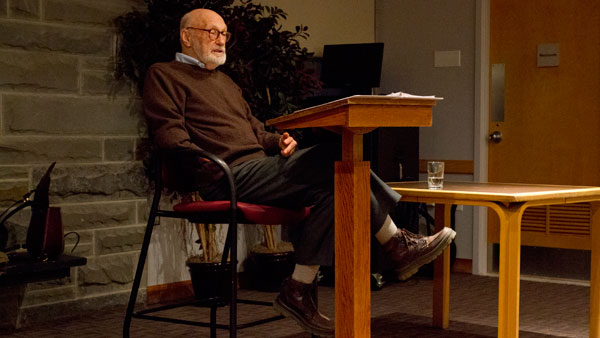 Norbert Nathanson was born with only a left hand and no feet. But for much of his life, he never considered himself disabled — even when people called him crippled.

“In my innocence, I had assumed that any discriminatory act was of a personal nature, not a societal one,” Nathanson said. “Although totally aware of my deficiency, I could not perceive myself as disabled, and thus had never been aware of the role that … society had prescribed me.”

At a presentation Tuesday in Clark Lounge, Nathanson talked about his life as a person with disabilities, which he wrote about in his book, “A Secretly Handicapped Man: A Memoir.” He also discussed how the system for treating and assisting people with disabilities in America is flawed.

Nathanson said the disability rights movement, which began in the 1960s, has not been as successful as other civil rights movements because the specialization of disability organizations hinders their ability to form a strong, cohesive political constituency. He mentioned how the Rehabilitation Act of 1973, which required public buildings to be accessible to disabled people, was delayed during the implementation process because of political gridlock.

“Disability rights groups staged demonstrations in 10 cities across the country, but they failed to capture the support of the non-disabled public,” Nathanson said.

“I realized it was a case of a disabled person extending himself to prevent the able-bodied person from embarrassment,” Nathanson said.

Nathanson was born in 1926 and spent the first 34 years of his life wearing handmade wooden forms around the ends of his legs to fill the gap in his shoes. Before he got fiberglass prosthetics in 1960, the stress of walking without a shock absorber caused prolonged pain throughout each day.

“I didn’t really think about the pain — the pain was a given,” Nathanson said. “I was too busy with the logistical problems, how to get from where I was to the next place I was supposed to be.”

However, the pain wasn’t just physical. By junior high school, his disability began to hinder his social development. Even though he participated in class and sports as much as possible, his classmates unintentionally excluded him from social interactions like playful teasing or young romance.

“Missing from my life were the small intimacies,” Nathanson said. “It dawned on me that, in their minds, I was not a participant. They could not even envision me as a participant in such circumstances.”

Nevertheless, most of his memories of childhood were pleasant. But Nathanson encountered more serious difficulty when looking for employment after college. He pursued jobs in industrial design, but he was unable to work his way up from physical-labor jobs, which was the way most workers progressed in their careers.

Junior Jarvis Lu said the way Nathanson described life with disabilities resonated with him. Lu, who has cerebral palsy, said Nathanson vividly represented the daily logistical challenges of having a disability.

“It’s like being at war with your body every day,” Lu said.

“Most of us try to stand out,” Kinney said. “All he wanted to be was anonymous.”