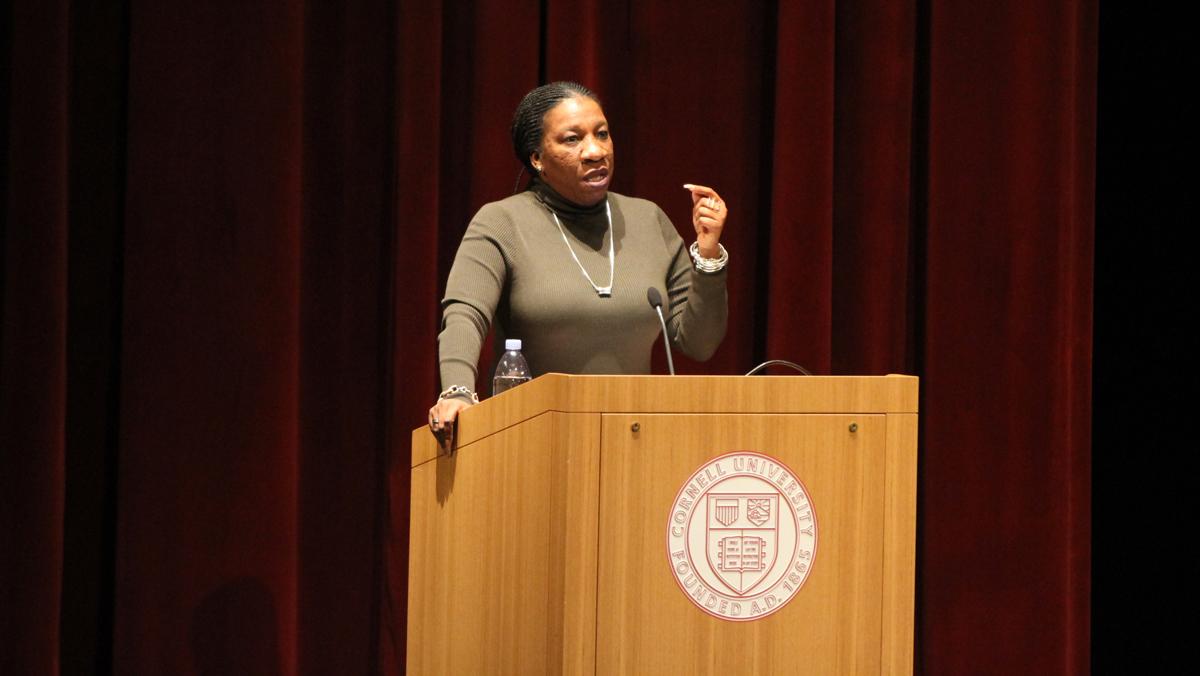 Tarana Burke, community organizer and founder of the #MeToo movement, elicited praise, laughter and tears Feb. 4 as she spoke on courage and empathy at Cornell University.

“#MeToo is not just a movement for famous white cisgendered women,” Burke said. “What we are is a global community of survivors committed to healing as individuals and as a community.”

The speech was sponsored by Cornell University’s Program Board, a student organization responsible for organizing lecture and entertainment events for the Cornell community. It was held in the university’s Bailey Hall and drew an audience of approximately 1,100 people. The lecture is one of six events the Program Board hosts annually.

During her speech, Burke reflected on the impact of the #MeToo movement and on her experience as a community organizer mobilizing community members to combat injustice.

Burke said she first envisioned the phrase “me too” in 1997 while working at the 21st Century Youth Leadership Movement in Selma, Alabama. During her speech, she described a situation in which one of the youths in the program opened up to her about her own experience with sexual abuse.

“The thing that bothered me about that so deeply is that I kept thinking about all the things I should have said to her,” Burke said. “I couldn’t bring myself to say, ‘Me too.’”

Burke officially coined the #MeToo hashtag in 2006 as a way to help women and girls who had survived sexual violence. The hashtag gained widespread public attention in October after actress Alyssa Milano encouraged survivors of sexual assault to tweet the hashtag following sexual assault allegations against Harvey Weinstein. Now the hashtag is used on social media across the world to reveal the prevalence of sexual assault and give a voice to survivors.

Ithaca College freshman Cara Pomerantz said she knew about the #MeToo movement through Twitter and social media but knew very little about Burke herself before attending the speech.

“It was so amazing to hear about the work that she has been doing for the last decade or so, and it gave me so much context for the history of the movement,” Pomerantz said. “She was amazingly moving.”

Burke said that when the #MeToo hashtag first took to Twitter, she didn’t immediately realize the monumental impact the hashtag would have on survivors of sexual assault.

“It was just mass disclosure,” Burke said. “Everything shifted in that moment.”

Burke is now the senior director of Girls for Gender Equity, a nonprofit organization dedicated to strengthening communities by creating opportunities for girls and women. Burke said one of her main focuses regarding the #MeToo movement is to give young girls power by teaching them how to have conversations about sexual assault.

“Children have this pain that they don’t know how to talk about,” she said. “When we started this work, it really was about giving them language.”

Cornell junior Daniela Manzano, executive chair of the Program Board, said she believes everyone in the audience took something important away from Burke’s talk.

“I could see people’s faces,” Manzano said. “They looked like they could feel everything she was saying. That’s why people are here.”

Cornell sophomore Raven Schwam-Curtis said that as someone who identifies as biracial, she believes Burke’s emphasis on individual complex identities within the #MeToo movement is a crucial aspect of conversations surrounding sexual assault.

“The fact that intersectionality is now a part of the conversation surrounding sexual assault and violence is really important and empowering for me, personally, as someone who is #MeToo,” Schwam-Curtis said.

Cornell sophomore Lexi Johnson said the event was not only inspirational, but also provided a safe space for survivors of sexual assault to heal.

“I think this was a very powerful event,” Johnson said. “It’s giving me ways to heal myself and heal other people who have experienced sexual abuse.”