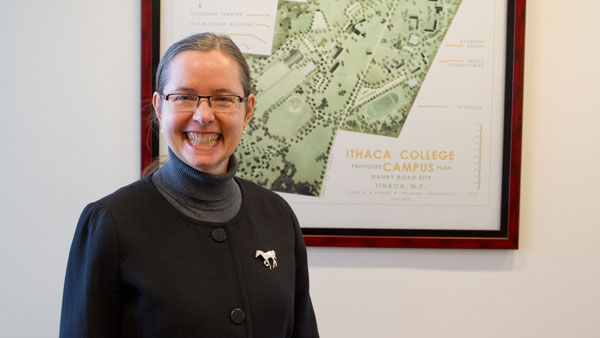 The Middle States Commission on Higher Education has reaffirmed Ithaca College’s accreditation, which ensures that students can continue to receive federal financial aid and graduate with a degree from an accredited institution.

Middle States is one of six U.S. regional accrediting associations that conducts a self-study of institutions of higher education every 10 years to make sure the institution is running at high quality standards. The agency’s reaffirmation of the college’s accreditation, which was given last month, is part of the review that happens every five years, between each decennial comprehensive review. The next, more comprehensive review is scheduled for 2018.

The last Middle States review of the college took place in 2008, when the college was given accreditation but had two years to meet three of the commission’s 14 standards of accreditation and show documented evidence in a monitoring report.

The regional accrediting agency made this year’s reaffirmation after reviewing the college’s Periodic Review Report, which the college submitted in June.

Marisa Kelly, provost and vice president for educational affairs, said Middle States also commended the process by which the PRR was generated. Staff and faculty members from several departments across the college assisted in writing the document, which was later opened up to the community for review.

She said this reaffirmation demonstrates a high quality of education at the college.

“It is also something students should be very happy about because it affirms what we hope they all know and feel in terms of the quality of the experience,” she said.

Carol Henderson, associate provost for accreditation, assessment and curriculum and chair of the PRR committee, said the college has been given recommendations for improvement to meet Middle States standards in the past.

She said this year’s reaffirmed accreditation with no recommendations means the college can now focus more on improving quality rather than fixing past problems in time for the next decennial review.

“It’s a clean slate for us,” she said. “It’s a reaffirmation that we are moving toward everything we are doing, and as we look forward to the 2018 report, we are not trying to make up for deficits. We are growing toward a better future at this point.”

Peter Rothbart, professor of music theory, history and composition and chair of the college’s Faculty Council, said the college should look ahead to the future, following this reaffirmation.

“Now we can move on to more progressive things,” he said.

Henderson said the Middle States decision speaks to the progress of the Integrative Core Curriculum, which is a part of the IC 20/20 strategic plan detailed in the PRR. She said implementation of IC 20/20 is expected to continue as planned.

“We told them in the report what we were planning to do, as well as what we had done,” she said. “That was, I am sure, a part of their confirmation in the reaccreditation decisions.”

Middle States is currently in the process of creating a new set of standards for the 2018 review. Henderson, who met with the college’s Middle States liaison this week in Philadelphia, said based on the preliminary new standards, the college seems to be on track to meeting them.

“The news for us there is pretty good,” she said. “It’s almost as though they think other college’s should be doing things more like we are.”